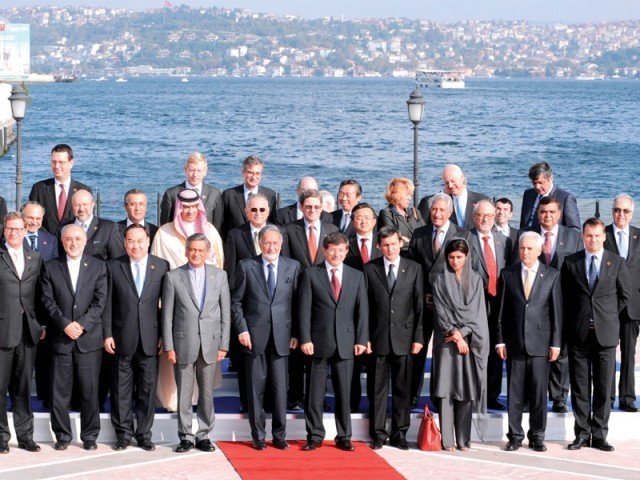 Leaders pose for a group photo during the Istanbul Conference at the Ciragan Palace. PHOTO: AFP

In a photograph laced with references, thirty-odd men, and two women, squint at the glaring sun as they pose on the European shores of Istanbul, the Asian side of the city rising over the choppy Bosphorus in the background.

The subjects in the photograph were foreign ministers and representatives of 20 countries that participated in the Istanbul Conference for Afghanistan this past week. Pakistan stands out in the setting not just metaphorically, given its regional role post-US withdrawal from Afghanistan, but also quite literally — its foreign minister, Hina Rabbani Khar, is one of the two women, and possibly the youngest participant, in the middle-aged, male-dominated group.

Several friends argued that it doesn’t mean much — her appointment is an historical accident and it does nothing to advance the rights of women in Pakistan. True. But if you’ve attended a multilateral diplomatic forum, you’d understand the value of having your representative stand out.

When tens of diplomats read out high-sounding, hollow, rhetorical, diplomatic gibberish, it makes a difference when one of them stands out, by virtue of their persona, and can grasp the audience’s attention. Admittedly, that’s just the starting point though. What you make of that opportunity is a function of your ability and competence, and as foreign minister, Khar hasn’t disappointed yet.

The venue for the summit could not be more ironic either. Perched on the shores of the Bosphorus, the 19th century Ciragan (pronounced tsheer-an) Palace has witnessed destruction and abandonment, much like the subject of the meeting — Afghanistan. The palace, gutted in an inferno in 1910, saw a reversal of fortunes when a Japanese-Turkish consortium bought and restored it to its Ottoman glory. The participants hoped the same for Afghanistan — that the war-ravaged nation will be able to reverse its fortune in an Afghan-led and Afghan-owned peace process, with assistance from regional countries.

The bag that worked