Can Ghotki and Pakistan ever rise above bigotry and religious prejudice? 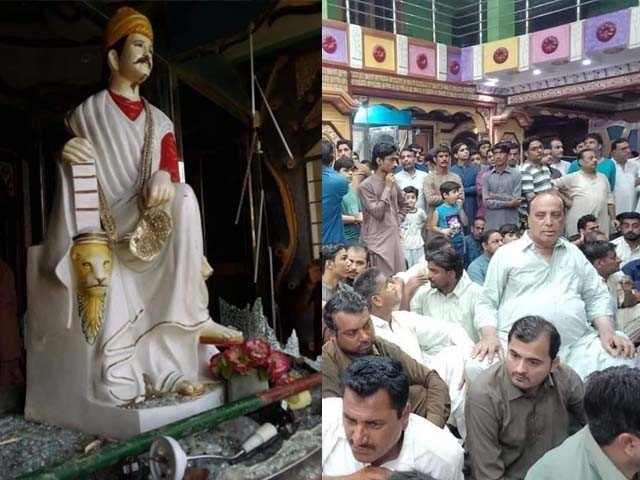 The individuals who spent the night in the temple in order to ensure that no further riots took place are the ray of hope which this country needs.

It appears that communities which have lived together for decades in Pakistan have recently begun to view their coexistence as a matter of shame rather than pride. Sindh, a land which used to exemplify the ideals of peace and harmony, the land of Sufis, has morphed into the land of hatred and religious extremism. Bigotry and prejudice, masquerading under the guise of religious righteousness have been destroying the social fabric of Pakistan. Therefore, one hesitates to predict the future of religious minorities in Pakistan if radical precautionary measures are not taken.

The latest in the long line of such worrisome incidents is what recently happened in Ghotki. On Sunday, Notan Lal, a Hindu school principal, was accused of blasphemy, and what followed was something which has unfortunately become commonplace in Pakistan. An unfounded accusation led to a mob destroying a Hindu temple in Ghotki and demanding that Lal be arrested.

We can't make the final decision until the whole investigation. pic.twitter.com/gAW2gkQrz0

A Hindu principal in Ghotki, Sindh has purportedly been accused of committing blasphemy by extremists, who have vandalised his school. Hindu community in the area is in danger. They must be provided with protection immediately! Video & report via Shankar Meghwar pic.twitter.com/Xctf04brli

While this is emblematic of many broader issues which are plaguing the country, it is important to address these matters by holding the individuals who launched these riots responsible for their actions. Mian Mithu, who is notorious for spearheading such incidents in the area, be it forced conversions or the destruction of temples, is freely challenging the writ of the state, and the government has failed to arrest him despite the abundance of evidence against him. Furthermore, it has been argued that Mithu’s desire to launch this attack against Lal, and the Hindu community as a whole, was motivated by the fact that Lal had given refuge to a Hindu girl, Monika Luhano, who had previously been abducted in a case of forced conversion. As per usual, an investigation will be launched into the Ghotki incident but will slowly slip out of public consciousness and will fail to yield any long lasting results due to the political influence that someone like Mithu wields.

As a result of the alarming rise in these incidents, there has been an exodus of Hindus from Pakistan, and Mithu deserves all the credit for most of the emigrations of Hindus from Ghotki. But these migrations come at a cost, and not everyone can afford to move to other countries or to the urban centres of Pakistan. The simple truth of the matter is that no one should be required to have to abandon their home in the first place. Religious minorities in Pakistan live in constant fear of being persecuted and of having their lives uprooted after casual and baseless claims of blasphemy.

I believe that the need of the hour is to take a stand against such hostiles, just like many of our Muslim brothers did after the Ghotki riots, and to stand alongside the religious minorities in Pakistan to ensure their safety; otherwise we risk the possibility of the white in our flag being wiped away. We often celebrate the diversity that makes Pakistan beautiful, but that diversity can only be retained by ensuring interfaith harmony and by owning our religious minorities.

We #Pakistani #Hindus are only 2% of the total population. I just want to know what danger do we pose to 98% population. Just visit my timeline & see how we observed Muhrram a few days ago, but yet we suffer incidents like #Ghotki.

Pic 1: When 100s of mobsters vandalized the temple.
Pic 2: Then 100s of peace-promoters came to guard the temple.#PakistanForAll pic.twitter.com/zQbWhR3JTH

These are Muslims sitting inside a Hindu temple in Ghotki, Sindh. They spent the night there to make sure no fanatical mob is able to attack the place. Some schemers have tried to pollute Sindh with bigoted ideas, but the traditional Sindhi ethos of tolerance has remained strong. pic.twitter.com/Vl4IIMWXLq

Despite the horror of what happened in Ghotki, I am still confident that this nation can change for the better. The individuals who spent the night in the temple in order to ensure that no further riots took place are the ray of hope that this country needs. I am optimistic that after this showing of communal solidarity, the likes of Mithu will become aware that they will face resistance if they openly harass Hindus in Ghotki. But until the state takes action against someone like Mithu and puts into place long-term policies which tackle the issues faced by religious minorities in Pakistan head on, these sorts of occurrences will continue to infect the nation. The blasphemy law in particular needs to be looked at because accusations of blasphemy have led to the destruction of many lives in Pakistan by people who feel that they are protected by the state machinery.

We have lived together for so long and we must continue do so because there is so much that binds us together. Our shared ownership of our land and our heritage is our biggest source of connection. In a sense, what happened in Ghotki represents both the worst and the best qualities of Pakistan. We are undeniably wrestling with the demons of religious persecution, but we have also demonstrated that we can stand together in the fight against such bigotry. One only hopes that we do not need to resort to the aftermath of such horrific incidents in order to be reminded of our communal unity.

The author is an educationist and a freelance trainer. He tweets as @RKGujar.

Why can’t a non-Muslim dream of becoming the prime minister or president of Pakistan?

Property for sale, unless you are a non-Muslim

My journey as a Pakistani-Hindu