Is our solidarity with Kashmir conditional? 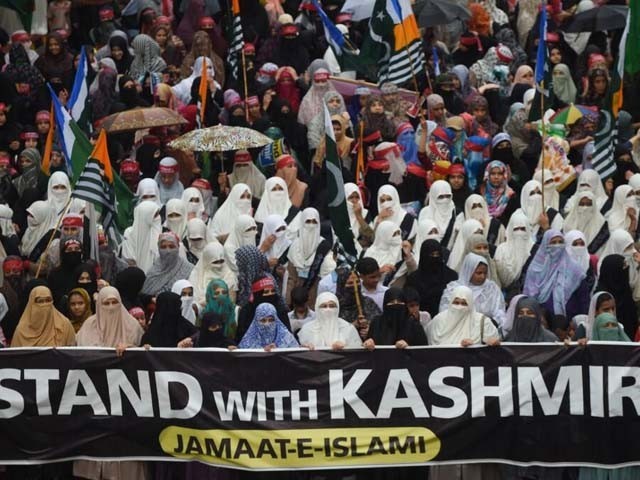 Activists of Jamaat-e-Islami Pakistan march in a protest against the Indian decision to strip the disputed Kashmir region of its special autonomy. PHOTO: AFP

As I drove around Islamabad to reach my office on Defence Day, I saw a myriad of posters around the capital. They all communicated the same message: Pakistan is the bastion of Kashmiri interest; hence, Kashmir belongs to Pakistan. The hashtag ‘KashmirBanegaPakistan’ and retweets from Kashmiris who supported this message flooded my Twitter feed. Some of my friends even posted about their interactions with a few Kashmiris, after which they had concluded that all 14 million Kashmiris wanted to be a part of Pakistan.

While the logic did not quite make sense, I could not help but wonder about this top-down construction of Kashmir and its people in our imagination. Does this linear construct of an imagined community align with the reality in Kashmir?

The Modi-led government’s communication blockade in Indian-occupied Kashmir (IoK) has sparked criticism not only in Pakistan, but also on a global level. But the situation has also opened a pathway for the Pakistani military and political elite to push for an imagined community in order to tap into nationalist sentiments for support against India. While the focus should have been on the suspension of civil liberties in IoK, the narrative appears to shift towards solidarity with Kashmir as long as Kashmiris want to be a part of Pakistan.

The Pakistani state is understandably deploying its ideological apparatus to garner support for the grave human rights violations in IoK, but we must ask ourselves about the repercussions of adopting such a myopic outlook towards a land that hosts a diverse group of people. The state’s official discourse about Kashmir is often confined to the fate of the majority in IoK, which is Muslim, that supposedly wants to be part of Pakistan and seeks liberation from the shackles of Indian (read: Hindu) brutality. Are we, in reality, only standing in solidarity with Muslim Kashmiris who stand with the Pakistani state?

This stance becomes all the more paradoxical when the Pakistan government fails to address the grievances of the people of Azad Jammu and Kashmir (AJK). In the past month, there have been protests calling for independence across Kashmir that were shut down by both Pakistan and India. Since Pakistan has claimed to champion Kashmir’s interest, why were 22 protestors from the Jammu and Kashmir Liberation Front (JKLF) arrested during a demonstration? It appears that our support for the people of Kashmir is conditional, and depends largely upon their willingness to want to join hands with us. We readily march for the people of IoK, but fail to listen to voices emerging from Pakistani-administered Kashmir.

While the Pakistani political and military elite will present arguments about how India was behind such activities in AJK, we must remember that their official narratives impact people who do not want what those in power claim they want. In fact, according to results of the last polls, it was concluded that the majority of people in both IoK and Pakistani-administered Kashmir wanted independence. Yet, the state narrative about Kashmir that is pushed through the upper echelons represents the exclusionary idea of the Pakistani state in its anti-India and pro (Muslim) Kashmiri brethren narrative. It appears that our marches and sloganeering are driven more by our hatred of the Modi government and less by the wants of the people of Kashmir.

At the time when India & Pakistan gained Independence from, Jammu and Kashmir was part of neither. A fraud occured. A fugitive despotic ruler in panic and without democratic consent of the people of J&K signed contentious IoA. J&K still has a separate flag, constitution & anthem!

Political scientist Benedict Anderson argued that a nation is imagined as a community in which there is a sense of comradeship among equals, despite the actual existence of inequality and exploitation, which makes it possible for millions of people to willingly die for various imaginings. This definition of a nation is particularly applicable in the case of Pakistan. In a country where religion forms an integral part of belonging to the state, the narrative of Kashmiris as our Muslim brethren taps into nationalist elements that makes us view Kashmir as being rightfully ours. For a long time, at least until the Babri Mosque incident in 1992, India did not want to be the Hindu mirror to a Muslim Pakistan. The Pakistani state has now found a way to further solidify the official discourse about Kashmir through the rise of Hindutva politics in India.

The state discourse about Kashmiris feeds into an imagined construction that glosses over the inequalities within a large group of people. When we internalise the image of Kashmiris as a homogenous group, we refuse to acknowledge the grievances within this group and how they contribute to the intertwined fate of Kashmiris through both India and Pakistan. This official discourse looks past the movements for an independent Kashmir, and doesn’t account for how factors such as religious affiliation, gender, age, socioeconomic status, among others, contribute to the way Kashmiris feel about their current status.

If one Kashmiri agrees with #KashmirBanegaPakistan, it does not apply to every single member of the land. Moreover, the top-down discourse about Kashmiris also takes the focus away from the people who are suffering under a communication blockade in IoK. Our sympathy should not only be confined to a narrative that focuses on a homogenous group of Kashmiris in our imagination. It is about time we unconditionally support and amplify the voices of any person who lives in Kashmir and wants basic human dignity, respect, and a better life in any way they deem fit for themselves.

The author is a Public Policy graduate with an interest in research on political and development issues in South Asia. She tweets at @malik_warda7 (twitter.com/malik_warda7)

Who is a Pakistani? A Muslim? A desperate migrant? Different from an Indian? A caged woman?