Will you march for climate change? 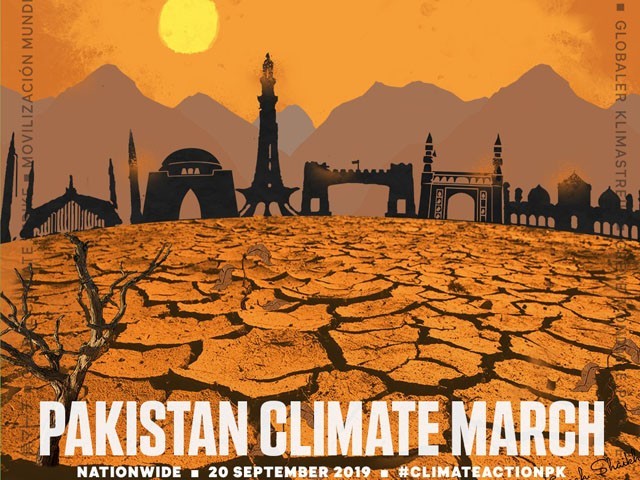 For the first time, there will be climate marches in Pakistan too in all the major cities on September 20th. PHOTO: RINA SAEED KHAN

I first met Greta Thurnberg, the 16-year-old Swedish school girl who is now inspiring young people all over the world to protest against the climate crisis, back in December 2018 at the United Nations (UN) Climate Change Conference. Hair tied in two pigtails, she looked much younger than her age, was extremely shy and spoke haltingly in English on several forums at the conference held in Poland. 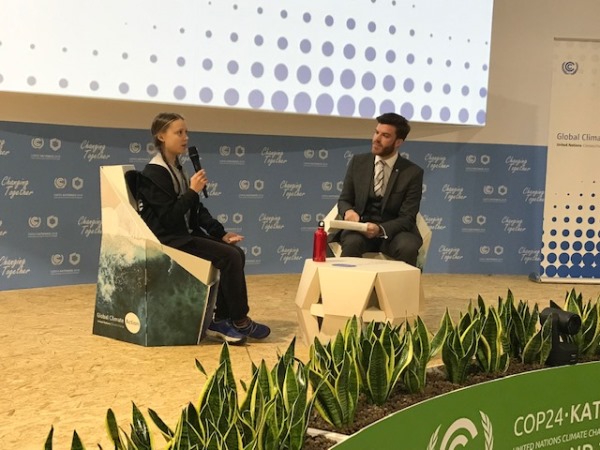 Sure, the media was following her around even then, but no one imagined she would become such a huge global star in such a short time in addition to being nominated for the Nobel Peace Prize. In fact, a friend at the conference whispered to me,

“You know she is a special child and should not be taken advantage of like this.”

Yes, indeed she is special, and not just because of her Asperger’s syndrome but because this little girl at such an early age has found her calling in life. Thurnberg recently posted on social media:

“I have Asperger’s syndrome and that means I’m sometimes a bit different from the norm. And — given the right circumstances — being different is a superpower… Before I started school striking I had no energy, no friends and I didn’t speak to anyone. I just sat alone at home, with an eating disorder. All of that is gone now, since I have found a meaning, in a world that sometimes seems meaningless to so many people.”

When haters go after your looks and differences, it means they have nowhere left to go. And then you know you’re winning! I have Asperger’s syndrome and that means I’m sometimes a bit different from the norm. And – given the right circumstances – being different is a superpower. I'm not public about my diagnosis to "hide" behind it, but because I know many ignorant people still see it as an "illness", or something negative. And believe me, my diagnosis has limited me before. Before I started school striking I had no energy, no friends and I didn’t speak to anyone. I just sat alone at home, with an eating disorder. All of that is gone now, since I have found a meaning, in a world that sometimes seems meaningless to so many people. #aspiepower #neurodiverse #npf

Thurnberg began what has turned into an international movement — a school strike for the future — by skipping school and sitting outside the Swedish parliament every Friday, demanding increased climate action. Recently, she braved a rough sea crossing on the Atlantic Ocean, which she described as camping out on a roller coaster, to travel to the United States (US) since she has not flown on airplanes since 2015.

Aircraft emissions are one of the highest contributors to carbon emissions. I struggle with this myself. How do I attend all the climate conferences I need to report on without flying there and adding to my own carbon footprint?

Thurnberg is now in New York to attend the Climate Action Summit that will take place on September 23rd during the UN General Assembly. World leaders, including Prime Minister Imran Khan, have been invited by the UN’s General Secretary, Antonio Guterrez, to mobilise “political and economic energy at the highest levels”. The ‘Climate Action Summit 2019: A Race We Can Win. A Race We Must Win’ will challenge states, cities, companies and citizens to step up action in various areas. These include energy transition, climate finance and carbon pricing, industry transition, nature-based solutions, cities and local action, and resilience.

According to Malik Amin Aslam, Pakistan’s advisor to the PM on climate change who will be accompanying him,

“We will be presenting our 10 billion tree project at the summit. Hardly any other developing country has this kind of ecosystem restoration initiative. We will be increasing our forest cover across Pakistan through plantation and assisted natural regeneration. It is a reflection of the global trust in our project that now the Germans (through the KFW Bank) and the Japanese are going to be supporting us with grants. We have in fact been selected to be part of the ‘Champions for Nature’ panel at the summit”. 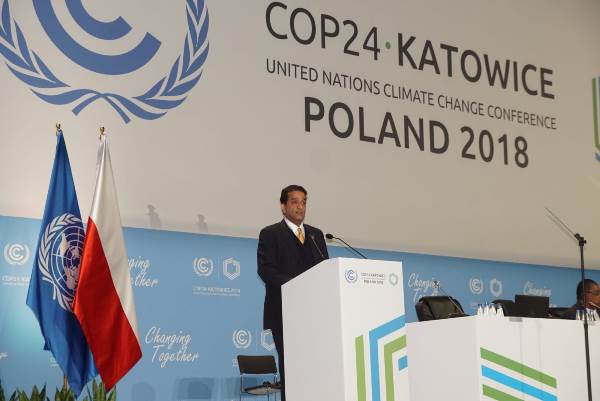 Malik speaking at the COP24 in Poland

Scientists tell us there is not much time left in which to act. Global warming is already causing more droughts, floods, severe storms, wildfires and melting ice across the planet. The Earth’s average surface temperature has gone up by one degree and is on track to warm another two or three degrees by this century’s end unless carbon emissions are drastically reduced. The Paris Agreement, signed in 2015, called for limiting global warming “well below” two degrees but then US President Donald Trump decided to withdraw from the global pact in 2017, and if he is re-elected, he will pull out completely.

On September 20th, just before the Climate Action Summit, a global strike has been called by Thunberg to put pressure on political leaders across the world to do more to curb their emissions. The slogan for the strike is:

“This September, millions of us will walk out of our workplaces and homes to join young climate strikers on the streets and demand an end to the age of fossil fuels… We demand climate justice for everyone.”

More than 2,500 events are currently planned in 117 countries including the US. After all, carbon emissions from just 15 of the largest economies, including the European Union, the US, China, India and so on, are more than 90% of the total, and are continuing to rise. It is imperative that their citizens come out and demand their governments, who caused the climate crisis in the first place, to do more. The youth organisers have mobilised the adults to participate, calling them “strikes” as some of them will be disruptive — blocking roads and bridges.

For the first time, there will be climate marches in Pakistan too in all the major cities on September 20th. We are calling them “marches” and not “strikes” as we are the victims of climate change given our negligible emissions. Even if Pakistan switches to cleaner energy overnight, which we should pursue since a low-carbon future is in our best interest and will clean up the air pollution in our cities, global warming would still happen. We actually emit less than one percent of global carbon emissions, which is way below the global average. 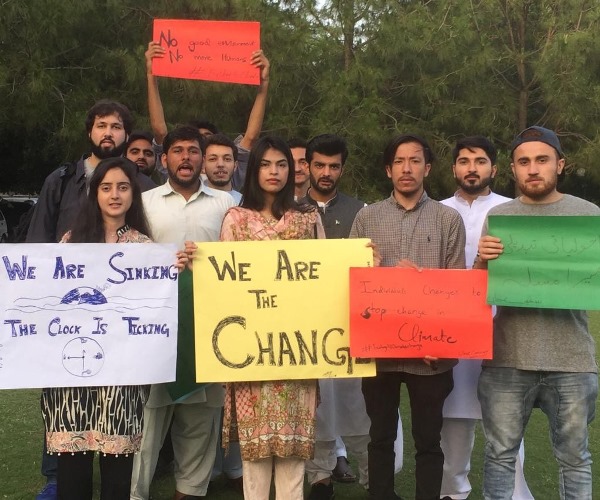 Protest over the future of Pakistan at a local college

From Gwadar and Turbat to Karachi, Lahore and Multan, from Peshawar and Islamabad to Gilgit, climate marches have been organised in every major city and town of the country. Students, activists, environmentalists, academics, non-governmental organisation (NGO) members and even government officials are joining in, coordinating meetings on WhatsApp groups. The marches are being organised in a voluntary and inclusive manner and everyone is welcome to join in with their placards after Friday prayers to march for climate justice. The exact locations for the individual marches are also being shared on social media. 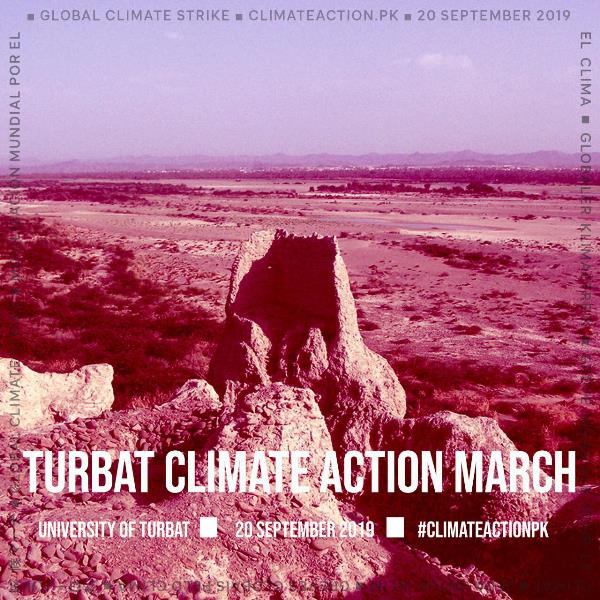 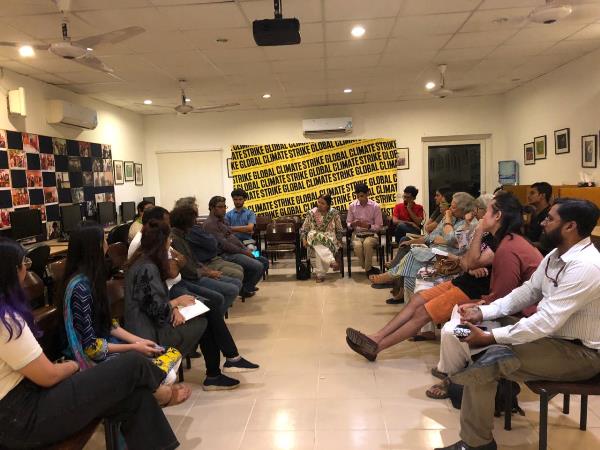 Meeting in Lahore to organise climate change marches across Pakistan

Most cities have their own specific demands — from action on reducing air pollution in Lahore to an end to garbage burning and the cutting of trees in green belts in Islamabad. The nation-wide demands are that the government declares a climate emergency, such as the one declared by the UK government recently, demand climate justice through a global coalition, adopt a low-carbon economy and ensure grass-root level climate adaptation efforts. In Islamabad, where the march will take place from the Press Club to the Parade Ground coming Friday (September 20,2019) at 3pm, protesters hope to hand over their demands to Minister of State for Climate Change Zartaj Gul. 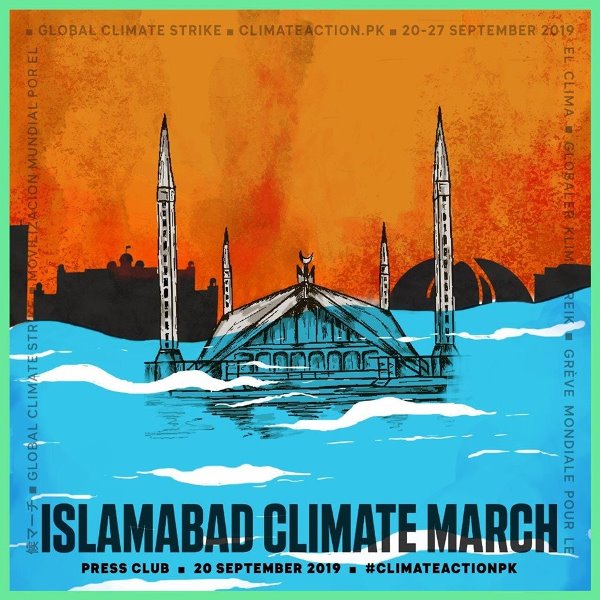 Come and march with us — remember that climate change is a serious threat. We have a time limit — we are driving down a road and there is a precipice. If the global average temperatures rises by two degrees, some say even by one and a half, it would mean the end of civilisation as we know it. In the words of Greta Thurnberg,

(All photos by the author)