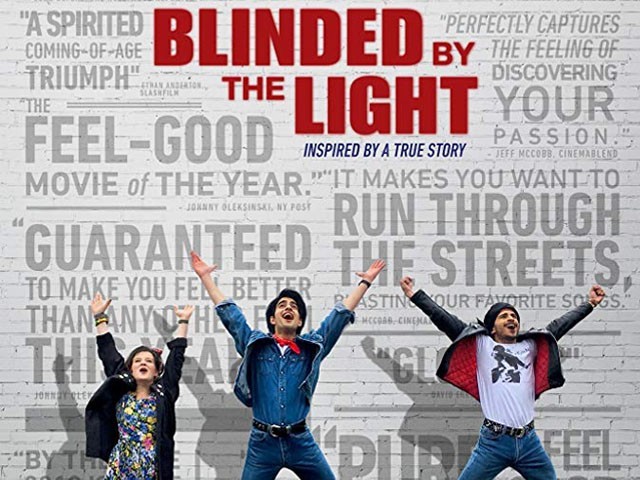 If Blinded by the Light is playing in a theatre near you, I urge you to drop everything and watch it. PHOTO: IMDB

Every now and then, there comes a film in the cinemas that silently grabs you and pulls you into a seat with overpriced popcorn and a head full of questions. And when it does, you realise this is all you were looking for. That this is what you were waiting for; for a long, long time. Blinded by the Light is just that movie.

Here’s a bit of context. I moved to Canada in 2012 from Karachi, Pakistan. Since as long as I can remember, I’ve had an obscure taste in music. By obscure I mean I liked unconventional pop music. All your Biebers, Chris Browns, and Ne-Yos could’ve taken a hike when I had my Oasis, Goo Goo Dolls and U2s. Somewhere along that road, I found my Bruce Springsteen as well.

I stumbled upon Springsteen the way I did upon most of my favourite artists. It was a happy accident, a good Netflix recommendation and a discography to die for. I binge listened to his songs while working my near deathlike odd jobs trying to cover my university tuitions. They don’t tell you the American dream starts off with a nightmare, do they?

The YouTube algorithms hardly work, but when they do, magic happens. Upon scrolling aimlessly beyond the usual two hours I used to spend on my phone, I was introduced to a new trailer for a movie called Blinded by the Light. The thumbnail had a brown boy wearing the checkered red and black flannel shirt that Springsteen was known for in the Born in the USA era. Intrigued, I clicked on the trailer and what I saw was an average immigrant boy who also moved from Karachi to a western city in hopes of a better life. He’s a writer and a poet, something yours truly at least claims to be, and look what happens! He stumbles upon the music of Springsteen. Reminds you of someone?

Inspired by true events, well amen to that. I booked my tickets and took my brother and best friend to watch it. I guess this is where my review for the movie begins. It’s not partial but it’s not biased either. This is the honest truth. This movie is amazing and I’ll tell you why. This movie speaks to you whether or not you’re an immigrant in the West, or if you know who Springsteen is, or if you’ve never lived under a Margret Thatcher government. That is the power of this movie.

It is based upon the book Greetings from Bury Park by Sarfraz Manzoor, a memoir on his experience of living in the United Kingdom as an immigrant Pakistani boy and falling in love with a piece of music that he wasn’t really supposed to be in love with. I haven’t read the memoir myself, but it’s definitely in my Amazon Kindle cart.

Directed by the woman who directed Bend It Like Beckham, this movie might be her magnum opus. The Kohinoor in her crown of a career. It’s the most accessible movie by Gurinder Chadha, and solidifies her name in the long list of storytellers and filmmakers around her. It touches on so many things so subtly that it’s hard to characterise this move into a specific genre.

Is it a coming of age movie? Yes.

Is it a musical? Well, kind of.

Is it a period piece? Most definitely.

Like the man whose music this movie is inspired by, Blinded by the Light is versatile and wholesome in all the right ways. It’s the story of my very Karachi-influenced family as much as it is of a Jersey family in the 70s or an immigrant family in Luton, England. It’s powerful and melodic and so efficiently told that not a second of this movie seems drawn out or boring. It’s the perfect example of ‘pait bhi bhar gaya aur niyyat bhi bhar gayi’ (stomach and intention, both have been filled).

The story revolves around Javed, a Pakistani immigrant boy who has dreams of becoming a writer. He lives with his parents and sister and secretly lives a double life of a Springsteen fan and a Pakistani immigrant boy trying to make it. The dynamic between him and his father is what the core of this movie is about. His father is not the villain and that’s the best part. I got what his father was saying, I knew exactly what he meant. But I also got Javed. That is the beauty of this movie. There isn’t a wrong person in this movie (except for the white supremacists, they’re usually wrong), just hard circumstances.

Sprinkled with beautiful little performances by a mainly unknown cast, Blinded by the Light is as impactful as any coming of age story should be. There are some recognisable faces, Hayley Atwell from Captain America as well as Nell Williams, which some of you Game of Thrones fans might remember as a young Cersei Lannister. Set with a backdrop of a fascism-inducing regime and the soulful score of AR Rahman infused with Springsteen, this movie feels as modern and relevant as it ever can and should be. The music is a character in the movie. It’s like La La Land but only if Springsteen was both Ryan Gosling and Emma Stone. It won’t convert you into a Springsteen fan, just as La La Land didn’t make you take jazz classes, but it’ll do something a little more profound. It’ll help you appreciate.

If Blinded by the Light is playing in a theatre near you, I urge you to drop everything and watch it. If you dislike it, I will personally not give a dime because you’re wrong and need to re-evaluate your life’s choices. But if you watch it, shed a tear and feel the bubbling under your chest and the movement somewhere deep in your soul, let me know. We should grab coffee together sometime.

(The film is not scheduled to be released in Pakistani cinemas)