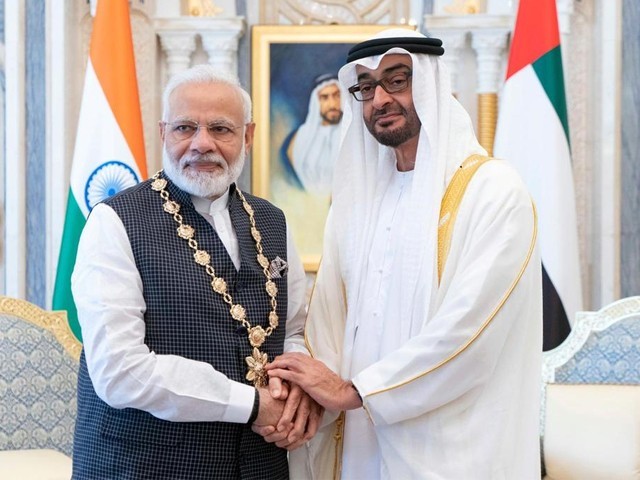 The United Arab Emirates (UAE) shocked many observers late last month when it awarded Indian Prime Minister Narendra Modi the country’s highest civilian honour amidst the on-going concern that New Delhi plans to carry out ethnic cleansing against the Muslims of Kashmir after its Israel-like unilateral moves in early August.

This development flies in the face of everything that the international Muslim community (Ummah) is supposed to stand for, yet it should have been expected, especially after the Emirati Ambassador to India lauded the de-facto annexation of occupied Kashmir right after it happened for supposedly aiming to improve the economic situation there. The UAE decided to side with India over Pakistan despite the breakthrough in relations achieved with the latter after Prime Minister Imran Khan’s successful visit at the beginning of this year because of the many strategic convergences that tie it much closer to New Delhi.

For starters, energy cooperation between the two has been increasing as a result of the UAE replacing the imports that India used to receive from Iran prior to abiding by the US’ unilateral sanctions against it at the beginning of May, and India’s millions of migrant workers greatly contribute to the real-sector economy of the Emirates. India has also been secretly involved in the UAE’s war on Yemen by allowing its hospitals to be used for treating the coalition’s injured soldiers, which the Abdrabbuh Mansur Hadi government believed made India its ally and inspired it to recently call on the country for assistance in defeating the South Yemeni separatists. Furthermore, India and the UAE both have serious concerns about the grand strategic impact of the China-Pakistan Economic Corridor (CPEC), the flagship project of China’s Belt and Road Initiative (BRI), with New Delhi fearing the consequences of closer Chinese-Pakistani cooperation and Abu Dhabi fretting that Gwadar might one day rival Dubai.

These three commonalities (economic, military, strategic) recently set the basis for Indian-Emirati cooperation in Africa, especially the Horn of Africa where the UAE is the most influential extra-regional player ever since brokering peace between Ethiopia and Eritrea. This made their relations even more important in a global context because of how they can be leveraged to ‘contain’ China in the continent through an expansion of America’s Indo-Pacific strategy there (of which India is one of the key components). The UAE and India are both US allies, and are close with France and Israel too, thus proverbially making them part of the same ‘international family’. Abu Dhabi’s ties with Tel Aviv come at the expense of Palestine, which is much more important to Arabs than Kashmir is despite these two struggles essentially being one and the same in the structural sense, so it’s not surprising that the UAE took India’s side with Kashmir if it already basically took Israel’s side with regards to Palestine.

Having explained why the UAE didn’t support Pakistan, it’s important to point out that this doesn’t necessarily mean that it’s Islamabad’s enemy either, even though this issue is of such crucial ethical and strategic importance for the South Asian state. The Emirates will more than likely follow through on its commitment to invest billions of dollars in Pakistan since the latter is veritably the global pivot state and the UAE has an interest in keeping its foot in the door. In addition, China isn’t ever going to give up on CPEC and its terminal port of Gwadar due to their global importance to the People’s Republic, so the UAE might realise that the age-old adage of “if you can’t beat ’em, join ’em” is truer than ever in that context. After all, Pakistan is interested in having as many states as possible becoming stakeholders in its success in order for them all to collectively work towards deterring the joint America-Indian Hybrid War on CPEC, so it’s extremely unlikely to refuse this much-needed investment even after the UAE’s decision not to support it on Kashmir.

There are several takeaways from this. ‘Ummah’ unity doesn’t matter, India and the UAE are expanding their strategic partnership to the global level, and Pakistan and the UAE will continue to cooperate with one another despite their disagreement over Kashmir. Overall, the UAE is rapidly becoming one of the world’s most influential Arab countries — if not the most influential at this point already — which is why it was so symbolic that it awarded Modi its highest civilian honour after supporting India’s de-facto annexation of occupied Kashmir. It’s undeniable that Abu Dhabi is now a trans-regional power with influence stretching from the Horn of Africa to the Himalayas, and it’s behaving as a great power in spite of its tiny size through the Machiavellian calculations that it’s making in pursuit of its interests at the expense of principles. Pakistan should therefore keep these observations in mind going forward when it formulating its future policy towards the UAE so that it’s not surprised by any forthcoming moves that its partner might make and could instead use them to its benefit.

History in the making: What to expect from Imran-Putin’s first meeting?