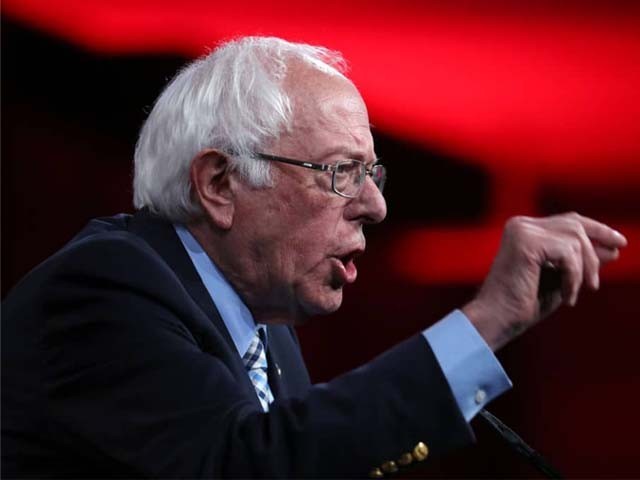 We are a nation that rejoices at semantics, not action. You need only look towards the reaction to Bernie Sanders’ statement regarding Kashmir to get a sense of that. Sanders, who is currently one of the candidates vying to become the Democratic presidential nominee, recently spoke at the Islamic Society of North America (ISNA) in Houston and made some remarks which led to a whole host of reactions. He called India’s actions in occupied Kashmir “unacceptable,” and went onto state,

“The communications blockade must be lifted immediately, and the United States government must speak out boldly in support of international humanitarian law and in support of a United Nations-backed peaceful resolution that respects the will of the Kashmiri people.”

Senator Bernie Sanders, US Democratic Presidential candidate, strongly criticises the communications lockdown in Kashmir and the “crackdown on dissent”. Today is day 28 https://t.co/TrJ2eY4KkK

Bernie Sanders at ISNA conference just said "India's action [in Kashmir] is unacceptable," criticizing its crackdown in Kashmir, revoking its semi autonomous status and the humanitarian crisis that has ensued. Glad a Democratic candidate is discussing this openly.

While his stance is commendable, it will have little to no real world impact. So what if politicians like Sanders or Jeremy Corbyn speak up against the atrocities in Indian-occupied Kashmir (IoK)? How does it really affect the ground realities in the region?

We must realise that simply making Kashmir into an international discussion topic is not a victory. Yes, it is important to give a voice to the voiceless, and fighting for the protection of their basic political principles can lead to change over time. But pray tell, hasn’t Palestine been an international talking point for a very, very long time now. Has that made Israel withdraw from Palestinian territories? Israel still remains a close confidant of the US and continues to enjoy great political leverage in Washington, regardless of its human rights abuses in Palestine. Unfortunately, it looks like the same fate awaits Kashmir.

Modi has already realised this by now, which is why he freely continues to escalate tensions in IoK since he knows that mere words cannot stop him. The simple truth of the matter is that no matter what Sanders says, from an economic and trade standpoint, India is far too powerful for American companies to ignore. They all want to make inroads into the nation and reap the benefits of the more than a billion consumers who reside there. These corporations pay a lot of money to lobbyists vying for their policies in Congress and the White House, and neither wants to anger an economy with a Gross Domestic Product (GDP) of almost $10 trillion.

Unfortunately, Pakistan simply does not have the diplomatic or economic pull needed to get the US to take a decisive stance with regards to Kashmir. Although Sanders mentioning the Kashmir crisis in a speech will play well for some of the voters whom he is trying to attract, it will have little ramifications beyond the US. His perception amongst the Muslim voter base at the convention where he made the statement may improve, but little beyond that will change because Kashmir is not particularly high on America’s priority list.

The situation in Kashmir is deeply disturbing. Human rights abuses taking place are unacceptable. The rights of the Kashmiri people must be respected and UN resolutions implemented.

A huge thanks from Kashmiris to @BernieSanders @IlhanMN @RepDonBeyer @tedlieu @RepAndyLevin for speaking out boldly on Kashmir and for calling a spade a spade. There is no justification for the ongoing repression in Kashmir. Our identity and our rights taken away in an instant!

The political courage is such a break of fresh air. #StandWithKashmir https://t.co/raAzwidUv2

While there is no denying the terrible situation in IoK today, America has proven that it is willing to look the other way when it comes to atrocities committed by its regional partners. One need only look at the killing of Jamal Khashoggi and America’s apathy towards it to realise that human rights violations are of little concern for America, unless they are committed by nations whom the US has a cold relationship with. Donald Trump’s recent meeting with India’s Modi only goes to show that whatever off the cuff claims of mediation he may have previously made, he simply does not have the leeway needed to press Modi on the issue of Kashmir. Since the American elections are more than a year away, Sanders will have no impact on American foreign policy towards India any time soon. And even if Sanders does come into office and decides to reprimand India a year from now, the vested interests of the US will prevent him from having any real impact.

As much as it may upset the humanitarians, the international affairs arena is a Hobbesian jungle where right or wrong simply does not matter. What matters is national and political interest. Sanders can prattle all he wants about the situation in occupied Kashmir, at the insistence of his Pakistani-American campaign manager Faiz Shakir, but if he ever steps foot in the White House, he would toe the same Washington line on India and Kashmir as his political predecessors.