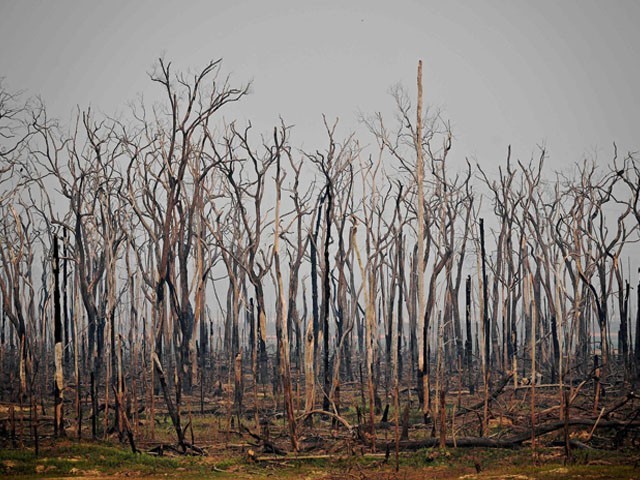 The fires in the Amazon rainforest have been the current topic of discussion this past week on social media, as people share photographs and outrage over the destruction of the ‘lungs of the earth’. However, a lot of the information is not exactly accurate, including many outdated pictures that have gone viral.

Some Brazilians also feel that there is some sort of conspiracy against their new government, led by their right-wing President Jair Bolsonaro, especially since he has dismissed the scientific consensus about climate change, calling it a hoax. Given his allegations of a “fake news campaign built against our sovereignty,” perhaps the best tool to gauge the fires are satellite images which present an accurate picture of what is happening in the heart of South America right now.

This July, on a visit to the US to the National Oceanic and Atmospheric Administration (NOAA) in Washington DC, I got the opportunity to see an amazing exhibit titled ‘Science on a Sphere’. This is a large global display system that uses computers and video projectors to display planetary data onto a giant 3D globe. It is the same as looking at Earth from space and different data sets can be displayed on it to understand events such as wildfires around the globe. The data comes from high-resolution imagery obtained from American satellites orbiting the Earth. These satellites are sensitive to infrared (heat) energy and are able to detect the thermal signature of fires. We were shown global patterns of fire activity through data sets displaying wildfires in remote areas.

The satellite data showed ‘agricultural fire patterns’ which occur both in South America and Africa during the dry season every year. This intense burning in South America, which occurs from August to October each year, is the result of human-triggered fires, both intentional and accidental, when land is cleared for agriculture. Natural fires in the Amazon, however, are rare since this rainforest is usually too wet to ignite on its own. The current data set providing a real-time analysis of this month’s fires in South America is showing that there are more fires burning in the Amazon today than in the past years.

National Aeronautics and Space Administration (NASA) has been using Moderate Resolution Imaging Spectroradiometer (MODIS) sensors to detect ‘thermal anomalies’ all over the world since 2003. MODIS is a key instrument on the Terra and Aqua satellites. Terra’s orbit around the Earth is timed so that it passes from north to south across the equator in the morning, while Aqua passes south to north over the equator in the afternoon. Terra MODIS and Aqua MODIS view the entire Earth’s surface every one to two days, acquiring data for models to assist policy-makers in making sound decisions concerning the protection of our environment. This past week’s fire detection by NASA’s Aqua MODIS has been the highest since 2010, with an indication that it may hit a record. These fires, that started weeks ago, have attracted worldwide attention and put significant pressure on President Bolsonaro who had allowed increased deforestation in the Amazon since he assumed power in October last year. They have sparked public outcry as environmentalists blame loggers and ranchers for setting the flames in order to open more land to agriculture — releasing massive amounts of carbon dioxide into the atmosphere. Moreover, Brazil is the largest exporter of beef in the world, which drives a huge chunk of demand for clearing the rainforest.

However, Brazilian citizen Christina Afridi, who lives in Islamabad and is visiting Brazil these days, says there have been fires in the Amazon in the past, without any global outcry. She gives the example of 2005 when around 125,000 fires broke out as compared to the 70,000 that have broken out this year. She pointed out,

“For some strange reasons, the world is hysterical and is accusing the newly elected Brazilian government — which is eight-months old — of having the evil intention of erasing Amazon from the map.”

Bolsonaro, a populist leader, is seen to be less corrupt than his predecessors and many Brazilians support his nationalistic views. But according to Pakistani environmentalist Aisha Khan, the global outcry is due to the fact that,

“There has been a major shift in perception from 2005 to now. The world community has greater awareness about environmental conservation and its link to climate change.”

It is also important to add here that Brazil had some of the world’s most stringent controls on deforestation and, from 2005 onwards, they slowed down Amazon’s destruction dramatically. These controls have now, however, been undermined by budget cuts and President Bolsonaro’s policies.

This week, at the G7 Summit, which is an annual meeting of the most economically-developed countries in the world, leaders vowed to provide $22 million for fire-fighting planes and other relief efforts for the Amazon. President Bolsonaro initially turned them down, but is now reconsidering the offers as global condemnation spreads. For 60 days, he has banned the setting of fires to clear land as pressure is mounting on his government to tackle the blazes. Western brands are considering the suspension of the purchase of Brazilian products. The global pressure appears to have led to the announcement of the ban, which many environmentalists consider to be “largely symbolic” as most of the larger fires are already considered illegal and the government decree still allows for subsistence farmers to set fires for agricultural purposes.

– Thank you, President @realDonaldTrump. We're fighting the wildfires with great success. Brazil is and will always be an international reference in sustainable development. The fake news campaign built against our sovereignty will not work. The US can always count on Brazil. 👍 https://t.co/ZicUKsYGcx

“We’re fighting the wildfires with great success,” President Bolsonaro has tweeted this week. However, he has been widely criticised for failing to respond to the Amazon crisis and for initially hinting that non-governmental organisations (NGOs) were behind the fires. Leading Brazilian businesses are now lobbying him to address the environmental disaster, fearing that western customers will soon boycott their products too.

Once considered a model for conservation, Brazil is now struggling to repair its image under Bolsonaro. Next week, the leaders of all Amazon nations, except Venezuela, will meet in a Colombian town in the heart of the Amazon to discuss the ongoing crisis. Bolsonaro, nicknamed ‘Captain Chainsaw’, won’t be able to claim that he is a victim of an international smear campaign for much longer. The world will not forgive him if the Amazon continues to burn — already a chunk the size of Hong Kong has burnt to the ground.