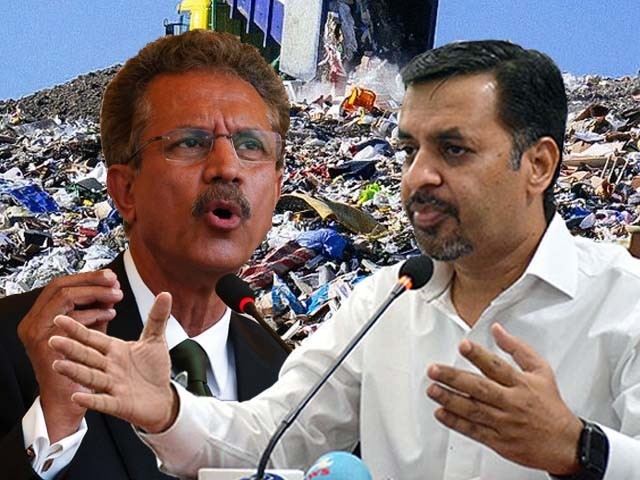 The Kamal-Akhtar show is, however, representative of the larger problems which are endemic in Karachi.

It has been a while since the disintegrated factions of the Muttahida Qaumi Movement (MQM) have been involved in mudslinging with regards to every issue related to Karachi. The recent episode between the incumbent Mayor of Karachi Wasim Akhtar and former mayor of Karachi, Mustafa Kamal took an interesting turn when the former appointed the latter and within 24 hours suspended him from the voluntary position of Project Director Garbage.

The entire fiasco began when Kamal claimed that he could clean up the city of Karachi within 90 days if he was provided with the resources and funds which the Karachi Metropolitan Corporation (KMC) has access to. In response, Akhtar threw down the gauntlet and offered Kamal the position.

I think @wasimakhtar1955 hired @KamalPSP just so he could fire him the next day. pic.twitter.com/qSxJD13fqa

However, putting Karachi’s garbage woes aside for a moment, from a political perspective, this dismissal will only help Kamal’s public image. This debacle makes him look like a politician who was ready to roll up his sleeves and get to work, but was unnecessarily reprimanded and dismissed. The simple truth of the matter is that no politician wants to get their hands dirty by plunging headfirst into Karachi’s unrelenting garbage disposal problem. The fact that Kamal raised his hand and volunteered to use public funds in order to help fix an issue which no one wants to touch was commendable, but it was also a political bluff. A bluff which Akhtar tried to call out but ultimately failed in doing so. Kamal not only talked the talk but he also walked the walk by accepting Akhtar’s offer, something which may have caught the mayor off-guard.

Not only that, Kamal demonstrated a readiness and enthusiasm to address the issue head on when he called a meeting with the municipal and sanitation staff. However, he convened the meeting at two in the morning and, as expected, no officials showed up, which provided Kamal with the opportunity, and the needed political arsenal, to once again present himself in a better light. He said,

“I will not only keep myself awake but will also keep my boss (Akhtar) awake and will regularly update him about the city’s cleanliness.”

At 2am, I reached at Asghar Ali Shah Stadium garbage dump to conduct meeting with Municipal Commissioner, Head Municipal Services & Dir Finance to get briefing from them. Unfortunately no officer showed up there except 1000s of volunteers were there to help. I am on it #Karachi pic.twitter.com/EsUJX5tkNh

I accepted the mayor as my boss & was ready to work under him. I’m not doing politics. I just wanted to clean up the city, says Chairman PSP and Former Mayor Karachi Syed Mustafa Kamal@KamalPSP
#Karachi #MustafaKamal #WasimAkhtarShouldResign pic.twitter.com/m22zo8OIFh

But make no mistake, it was evident that the exchanges between Akhtar and Kamal were relying heavily on showmanship and each politician was trying desperately to one-up each other. After his appointment, Kamal lashed out at Akhtar, arguing that the mayor should step down. Hence, while Kamal did force Akhtar’s hand, given the dramatic U-turn, it appears that MQM-P is not only lacking in its performance but has also failed to read the political chessboard. It seems that Kamal has won the show for the time being, which prompted him to say,

“He (Akhtar) realises that I would deliver on my promise with the same limited resources that he claims are the reason for Karachi’s sanitation problems.”

After Kamal’s tenure, the MQM-P has been running its election campaigns on the agenda that it will help build underpasses, flyovers and will resolve the water shortages in the city. But as far as mayors of Karachi go, Akhtar has proven himself to be wholly incompetent. He was granted the necessary funds needed to clean the drainage system of Karachi before the monsoon rains began, but later said that those funds were not enough. His performance has raised many questions, not only aimed at him, but also about the state of MQM-P’s current leadership.

But the mess Karachi currently finds itself in is also a result of poor policies by the Sindh government. The 18th amendment, passed by the Pakistan People’s Party (PPP) in 2010, did not serve Karachi, instead enslaved the city’s infrastructure for the provincial government. Asif Ali Zardari perhaps knew the political future of his party, given their performance, therefore, the 18th amendment helped the PPP by granting them full control of the province. Additionally, the Sindh Local Government Act (SLGA) 2013 reduced the power of the city mayor. As a result, the mayor now has to ask the Sindh government for the provision of funds, and the commissioner of Karachi oversees the mayor’s expenditure. As a result, the provincial capital and economic hub has been orphaned and thus lacks diligent oversight as it is torn between warring factions.

Hence, the Kamal-Akhtar show is representative of the larger problems which are endemic in Karachi. It is apparent that the political troika is clearly not working for the city, under which one party is ruling the federation, the other is ruling the province, while the third force is controlling the local government, and all three are fighting for control of Karachi. As a result, each of these parties repeatedly dig up the long used and abused idea of cleanliness campaigns and, after some good photo-sessions, forget about the cleanliness drives completely.

Ultimately, these are only short-term policy measures which do nothing more than apply a band-aid on the bleeding city of Karachi. The metropolis needs a long-term garbage disposal plan under which the necessary resources should be assigned to the elected representatives of the local government. The appointment of Kamal looked like a step in this direction, but it seems that once again, the problems of Karachi have fallen prey to petty politics.