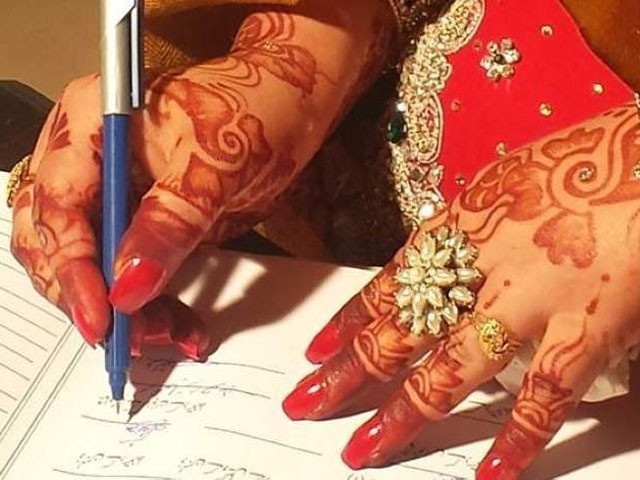 While Pakistan's marriage laws do not specifically ask the bride her sexual status, our social and cultural norms are no less stifling and regressive. PHOTO: WIKIMEDIACOMMONS

Since 1961, Bangladesh’s Muslim marriage laws required the bride to select one of the three options on a marriage certificate: widowed, divorced or kumari (virgin). Whereas, grooms had no similar requirement. However, earlier this week, Bangladesh’s highest court overturned this extremely medieval law.

Now, not only will the word ‘virgin’ be removed but marriage certificates will also require grooms to select their marital status as either unmarried, widowed or divorced. This monumental step wasn’t easy for the lawyers and activists involved in this case. It took five years for the court to hear their petition. And while they issued a brief verdict straight away, agreeing that the “humiliating and discriminatory” term should be removed, a longer verdict won’t be released until October. But for now, Bengali lawyers and activists are calling the ruling a landmark verdict for gender equality in Bangladesh.

Allow me to seize their moment and take it a step further to argue that this legal change is not only revolutionary for the Muslim females of Bangladesh but also for the neighbouring Muslim-majority countries. Ask any Muslim woman and she’ll tell you that there is an immense problem of how much our communities value our virginity.

In fact, long before we even come to understand what being a virgin means or what sexual intercourse entails, we are taught to guard our ‘honour‘ above all else. Take as an example the time I was acting like a regular, rowdy eight-year-old. I jumped over a fire hydrant and immediately got into a ridiculous amount of trouble. With no explanation, my mom ominously warned me that playing in this way could “damage” girls. This was years before I understood that she had been referring to potentially damaging the hymen — whose presence is traditionally taken to be a mark of virginity.

Attaching so much importance to a woman’s hymen is not only regressive, it can be life-altering or even life-threatening. Recently, a young Iranian woman came to the law firm I work at for help with her case. She had been beaten badly by her family after word had gotten out that she’d lost her virginity while living in America for higher studies. Now she was scared for her life and too terrified to return to a country she called home all because she’d been blacklisted by her community for failing to ‘protect’ her virginity.

No matter what your personal belief system tells you about premarital sex or the weight that should be attached to virginity, you and I are hopefully in agreement that it is inherently damaging and disturbing to tell someone that losing their virginity is equivalent to their having ‘lost’ something. Yet, this is exactly what regressive social and legal customs, like Bangladesh’s marriage laws, are telling women.

According to our society, the ideal woman is demure, modest and restrained not just in the way she walks, talks and dresses but also in her aversion to all things sexual. While Pakistan’s marriage laws do not specifically ask the bride her sexual status, our social and cultural norms are no less stifling and regressive. Perhaps this is why so many young Pakistani girls still grow up fearing that they won’t bleed on their wedding night. Consider the custom in several rural parts of our country where it’s still common for elders to check bedsheets to see whether the newlywed bled on her wedding night.

Also consider the occasional news stories on the increase in hymen-repair surgeries, a last-ditch effort by some non-virgins hoping to get married. Because from a very young age, we come to understand that failing to bleed is a sign of immorality and sexual misconduct. Finally, consider the countless drama serials that implicitly refer to a divorced or widowed woman as a ‘damaged good’. It’s 2019 and our television shows still tell us that our self-worth is measured by whether or not our virginity is intact.

Having considered all this, it becomes easier to see why Bangladesh’s small legal linguistic tweak is such a paradigm shift. Because be it a Bengali bride, a Pakistani newlywed, or a young Iranian student, we are all living in a part of the world where our virginity isn’t a personal matter. Instead, it is a public obsession. Here, a woman’s decision to have sex directly correlates to a family’s honour, and being honourable or dishonourable can mean the difference between life or death.