Kashmir – a land marred by betrayals 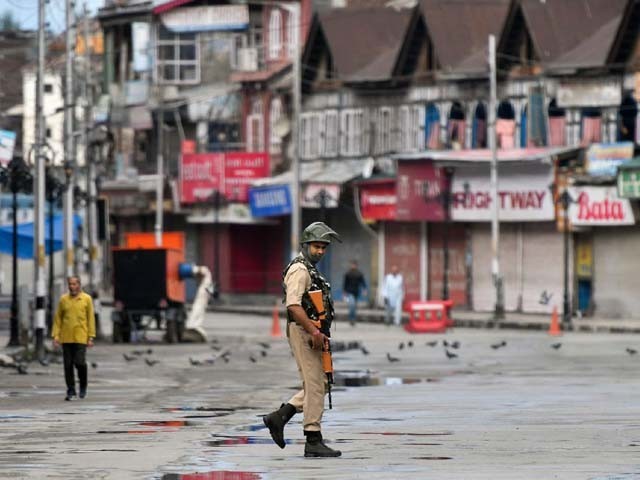 A security personnel patrols a deserted road in the Lal Chowk area in Srinagar. PHOTO: GETTY

The once heavenly abode of the Mughal kings, one of whom famously called it “paradise on Earth” – Kashmir today lies in tatters. It remains divided in bits and pieces. Its people seething in desolation and broken by the latest insult in a long list of insults. Dejected and disheartened by the apathy the world has shown while their political, cultural and religious identity has been assaulted and snatched.

It has been 21 days since Article 370 was scrapped and an unprecedented communications blockade was put in place; practically insulating Kashmir from the rest of the world. Close to eight million people incarcerated within their homes, with each nook and corner patrolled by the huge influx of Indian military and paramilitary forces, making Kashmir one of the world’s most militarised regions.

It is yet another betrayal Kashmiris have had to face in a long history of betrayals. The latest of which might be the last one because there is a high chance that in some time from now, the Kashmiris as an ethnicity might become a minority in Kashmir, so diluted that they would become extinct. That seems to be the plan behind the latest insults – the revocation Article 370.

It all began in 1586, when the powerful Mughal emperor Akbar, having faced failure in his two previous attempts to annex Kashmir, invited Yusuf Shah Chak, the ruler of Kashmir, to Delhi for a settlement and an offer of friendship. Much Kashmiri blood had been spilled to keep Akbar out of Kashmir. Yusuf accepted the offer, travelled to Delhi and never returned. Akbar deceitfully had him arrested instead and jailed him in the hot plains of Bihar, where he died and remains buried. His young son, Yakub Shah Chak, became the new king of Kashmir, but his resistance to Akbar’s advances was short-lived and, ironically in the month of August of 1589, Akbar successfully annexed Kashmir. That was the last time Kashmir was ruled by an indigenous ruler. What followed has been a long trial of despondency and misery.

The Mughals ruled Kashmir until Ahmad Shah Abdali, the Afghan ruler, let loose his forces and assumed control of Kashmir in 1752. The tyranny of the Mughals was matched by the Afghans, until 1819 when the Sikhs, under Ranjit Singh, overthrew the Afghans and took control of Kashmir. Hoping for some relief from the misery, Kashmiris were left to sob when their religious persecution began under the new Sikh regime. Friday prayers were banned, as was the call to prayer. But one of the worst betrayals for the people of Kashmir came at the hands of the British who, in 1846, sold Kashmir to Gulab Singh Dogra for seven and a half million nanak shahi rupees, one horse, 12 goats and three pairs of cashmere shawls. That was the ‘price’ for the land of Kashmir, our lush green meadows, our mighty mountains, our crystal waters, our beautiful people and our lives. The British called this ‘deal’ the Treaty of Amritsar. We call it treachery.

The Dogra rule brought extreme cruelty for the people of Kashmir, particularly the Muslims, who were marginalised and remained very poor, even though Muslims formed the majority of the Kashmiri population. The brutalities of the Dogra rule remain epitomised in the various cultural songs in Kashmir. The persecution continued from one Dogra ruler to another, and by the time of the last Dogra leader, Hari Singh, Kashmiris wanted their freedom. In 1931, he quelled a revolt in pursuit of this goal by killing 22 Kashmiris.

As British rule in the Indian subcontinent ended in 1947, Kashmiris hoped to gain momentum for their freedom as well. A revolt ensued to over throw the Dogra ruler, but he massacred between 20,000 to 200,000 people, and over half a million people were displaced. At this point, Pakistan sent in its militias from the North-Western Frontier Provinces (now called Khyber Pakhtunkhwa), resulting in Singh asking the Indians for help. The help came with a condition to accede to India. Singh, a Hindu, ruling over a Muslim majority, acceded temporarily with the conditions that were enshrined in Article 370 of the Indian constitution, leading to the first war between India and Pakistan that divided Kashmir into Indian-occupied Kashmir (IoK) and Pakistan-administered Kashmir.

Article 370, however, gave a constitutional guarantee of autonomy to the people of Kashmir, allowing them to have their own prime minister, flag, and constitution. There was to be limited Indian political influence in Kashmir only in the matters of defence, communications and foreign policy. Another sub-section of Article 370, called article 35A, barred non-Kashmiris from owning property in Kashmir, thereby preserving the ethnic and religious demography of the region.

Therefore, Article 370 and the awarding of a ‘special status’ to Kashmir was not a favour. It was rather an agreement upon which the accession was based. Today, it is a piece of paper which lies in the dustbin, torn apart unilaterally by India after imprisoning the Kashmiri population for fear of reprisal. The state has been further bifurcated and its people dis-empowered. However, this latest betrayal was one among a series of betrayals the Indian government has committed since the accession. It had already eroded the autonomy to a vestige. What was left was a hope for the right to self-determination, as promised by first Indian Prime Minister Jawaharlal Nehru and the United Nations Security Council (UNSC). When India tore away from that agreement on August 5, 2019, it hoped to change the demography of Kashmir in order to help materialise its ‘Hindu Rashtra’ dream. Kashmiris, however, had to be battered and strangulated so that no voice from Kashmir could be heard. It has left the people of Kashmir to sob in silence.

However, what provides brief respite is the fact that none of those empires who forcibly ruled Kashmir since Yakub Shah Chak exist today. Their massive empires and enormous power lies buried in history books and graves. What remains is the resilience of the Kashmiris.

The author is from Srinagar, Kashmir. He is a researcher at the University of Marburg, Germany. His works have appeared in Foreign Policy, Warscapes Magazine and Greater Kashmir, among others. He tweets @ullahi_ (twitter.com/ullahi_)

Pakistan celebrates Kashmir Solidarity Day but does it really want Kashmir to be independent?

Whether it’s ghosts, child traffickers or braid-choppers, the resilient people of Kashmir will continue to rise

Gowhar, the nun-e-phol of Kashmir, and the ruthless killing machine that is the Indian CRPF

How can India justify killing a 16-year-old Kashmiri?