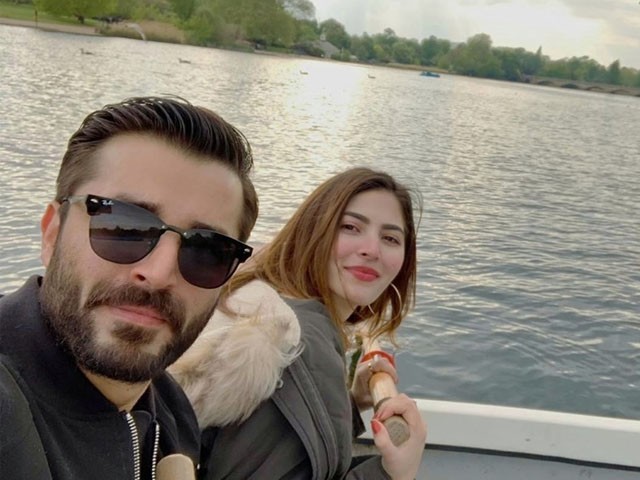 There was no need to indulge in this strange social virtue insisting that he randomly proposed to one of his "platonic" friends. PHOTO: FACEBOOK/HAMZAALIABBASI

A couple of days ago, the news about actor Hamza Ali Abbasi marrying fellow actress Naimal Khawar Khan broke out. I was extremely excited upon hearing the news because, in my opinion, they make one of the most photogenic and beautiful couples.

With his Robert Pattinson-like looks and prodigious acting talent, Abbasi is one of the most famous television stars and perhaps the only male actor to truly rival Fawad Khan in terms of popularity. Khan is also a gorgeous woman and her performance in serial Anaa shows a lot of promise for the future. However, then my attention was drawn towards Abbasi’s Facebook post which had gone viral and was being hotly debated on social media. Intrigued, I went on his page to read it.

I planned to say this after 25th but since the news is already out so here i go. Yes i am deliberately using this public…

Now Abbasi is no stranger to controversy; in the past, several of his posts have evoked a lot of storm due to their controversial nature. He has defended Hafiz Saeed, mocked Kulsoom Nawaz’s illness and then posted insensitive posts when she passed away and expressed nonsensical ideas about the MeToo movement.

#NA120 US/IND say he is a terrorist, i know Hafiz Saeed as a righteous man. Huge respect for Milli Muslim League for getting 4k+ votes.

#KulsoomNawaz Yes i tweeted this be4 elections & i stand by it. Its disgusting to use ur wifes illness in PAID ad election campaigns to gain sympathy. Sorry for sounding insensitive at a time of grief for Sharif Family but propaganda against me on my tweet by PMLN is disgusting! pic.twitter.com/QfXirt5ax3

#KulsoomNawaz Absolutely disgusting how some people r using Kulsoom bibis death to gain sympathy for Nawaz & Maryam & trying to portray them as tragic heroes. Shameful… Utterly shameful & disgusting. May Allah have mercy on Kulsoom bibi's soul & may Allah give us some decency.

Random thought: With this entire #MeToo global epidemic on the rise, I am beginning to realise that ISLAM was right all along when it ordains gap between the 2 genders. So called modernism has brought us to a point where the line between flirting & harassment is insanely blurred.

But after reading this recent post, I think Abbasi has outdone himself. The content of his post has left me and many others confused about his state of mind.

On the scale of "my platonic friend/no gf-bf nonsense" to "we can't breathe without each other, how neurotic are you?

The entire post focused more on flaunting his religiousity and his relationship with Allah and, like many others, I had trouble understanding Khan’s place in it. He claimed that he did not love Khan, had been in a “platonic” relationship with her for the past two years and was now marrying her to please Allah. According to him, she agreed and now they cannot even breathe without each other.

Finally finished Hamza Ali Abbasi post about his relationship with Allah. I am still trying to figure out, where to put Naimal in it.

I think any woman would feel insulted if told that the guy proposing to her is not really in love with her but is doing so to solely please Allah. Abbasi framed his decision to marry her as a case of charity or sacrifice. Moreover, if pleasing God is the main consideration, then why marry a beautiful and successful woman like Khan? Why not marry someone much less privileged as that is more likely to please Allah. Or, for that matter, why marry anyone? There are multiple better ways to please the Almighty.

LOL YOURE A JOKE
imagine marrying someone who publicly declares that he hates the idea of marriage, and is emotionally unavailable and doesnt even love you but is only getting married for his afterlife. brown men are something else. also *they’re

Some people make biryani for themselves cuz they're either hungry or bored. These are all good reason y'all. I'm basically a pulao person but imma make biryani cuz my sole reason is to please Allah. #HamzaAliAbbasi #HamzaWedsNaimal pic.twitter.com/wInjfrKEbW

The audacity of this guy to claim that he is solely doing this to please Allah!! DUDE why not stop acting or give charity or something. He will be using the same excuse to marry 3 other girls as "4 wives is sunnah". I am appalled#HamzaAliAbbasi#Naimal

Even more bizarre was the claim of a “platonic” relationship with Khan. What really made the entire claim even more incredible was that in the same line he claimed that now both can’t even breathe without each other. So despite a “platonic” relation, Abbasi decided to marry Khan, which is not a platonic bond, and suddenly after the proposal, which even though was solely to please Allah, they can’t even breathe without each other. The entire post reeked of senseless contradictions, self-righteousness and twisted morality. But what made him come up with such a strange post? As I thought about it, I realised that the answer is so obvious.

Abbasi is one of those celebrities who, after “rediscovering” religion, start wearing it on their sleeves. Rather than making that rediscovery of religion a matter between themselves and God, they start flaunting it along with lecturing and judging others. They make rather extreme stances as they have to show how religious and pious they have become. Yet, at the same time, they don’t want to give up the glamour and privileges which come from their celebrity status. This internal tension then manifests itself in absurd outpourings where they convince others that they only had a “platonic” relationship with the person they are marrying.

In all probability, Abbasi wrote this post to make people believe that his extreme views do not make him hypocritical and that he is above ‘haraam’ things like love. He had to do it since he feared backlash on being religious and having an affair at the same time. Maybe he wanted to address the possible allegation of engaging in physical intimacy before marriage. After all, the plan is to transform Pakistan to a state of Madina, and as ‘cultural secretary’, he can’t be seen in a ‘modern’ relationship with a female.

There was no need to indulge in this strange social virtue insisting that he randomly proposed to one of his “platonic” friends. He makes it seem as if marrying out of love is a sin and an unnatural thing. Why not simply admit that you are in love?

Abbasi’s subsequent post, in which he has tried to address the blatant contradictions in his original post, has left me with no doubt. In this post, which is more nonsensical than the first one, Abbasi has lectured us about “haraam” and “halal” and how one should have a “platonic” relationship before marriage to keep it “halal”.

This case is a lesson for all of us. We should not wear religion on our sleeves; we should avoid taking extreme positions and judge others from those positions. Failure to do so has the potential of making us intolerant and strangely contradicting just like Abbasi. It is sad that he has a massive fan following and, therefore, has the potential to influence many from such contradictory ideas.