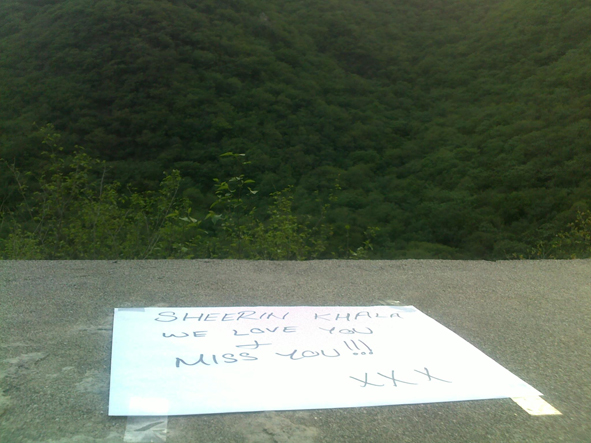 One bereaved family left a message for someone they had lost. It read “Shireen Khala, we love you and miss you.” The crowd tried to click a picture of them too. PHOTO: ASAD BAIG

As the clouds finally gave way to the sun, dozens of families from the twin cities decided to make a day out of it and rushed to Daman-e-Koh, to look at the debris of fallen flight ED 202.

I didn’t exactly hear what these mothers were telling their children, but from their expressions and their hard-contained excitement I’m pretty sure it was something along these lines.

‘Look beta, that’s where the plane crashed,’ ‘Dekho, dekho, not many people get to see air crash sites in their lifetime!’

Sensing the mob’s interest, a lone entrepreneur hooked up his binoculars and started charging Rs10  for a closer look at the most interesting sight in the Capital. Judging from the crowd’s interest, this young guy didn’t just have a field day on Friday, but will continue to be in business until the debris is cleared.

Maybe a photographer will show up the next day, offering to take a shot of people with the debris in the background – after all, what’s better than a professional camera to zoom in the grim details in all their glory.

Maybe, tomorrow these kids will call up their friends to boast about how they were ‘actually this close to the site’ and how they could see rescue workers trying to dig up the last few remains of the ill-fated passengers. Maybe, they will tell them they have just got to check it out, because it isn’t a sight to be missed.

As the weekend approaches, maybe the crowds will swell and it will be like a gala with mounds of people crowding the site.

I say ‘maybe’ because as a journalist, I can’t speculate. But what I do know as a fact is that most of these people will or have already called up their friends and ranted about just how morbid the media is for showing the things they went all the way up there to see.

I’ve been hearing criticism on media’s morbid tendencies for years. And for years I have bore it with the knowledge that none of it was misplaced. I’ve been asked how I sleep at night, when I am somehow responsible for showing things to people that give them nothing but pain. I’ve accepted the criticism and tried to do something to make it better.

And while, the so called seths behind the news channels and the rat race for most viewers are the reasons for the media’s increasing insensitivity, today, I have been reminded of the real reason.

Ratings don’t increase because we show blood and gore – they increase simply beause our public is in love with blood and gore. The rising excitement of the people picnicking near the crash site proves just how much we love tragedy.

As most of the crowd pointed and clicked away, one bereaved family stood apart, watching silently, and left a message for someone they had lost.

A note saying “Shireen Khala, we love you and miss you.”

The crowd tried to click a picture of them too. And then they hate the media.

No wonder then. After all, if you are ugly, nothing can be more despicable than the mirror, no?