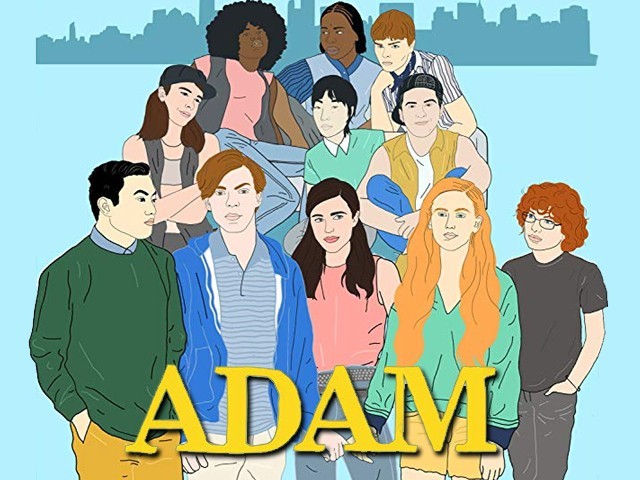 The film has already managed to garner quite a lot of criticism, a trending hashtag against it and a petition to boycott it. PHOTO: IMDb

Every now and then, efforts are made by filmmakers to produce a movie representing the LGBTQ community as accurately and unbiasedly as possible. However, very few of these movies fulfill their aim while also being politically correct.

Adam, based on its namesake novel, is a prime example of this case. Released recently on August 14th, the film has already managed to garner quite a lot of criticism, a trending hashtag against it and a petition to boycott it. Marketed as ‘one of the most exciting LGBTQ films of the year’, Adam is, in fact, a classic exemplar of what exactly a movie made on the LGBTQ community is not supposed to portray.

#boycottadam #boycottarielschrag Adam is a disgusting excuse of a story, a literal CisHet man raping lesbians by lying and saying he’s a trans man. Ariel Schrag should be ashamed of herself, and this movie needs to die before it even starts. This is peak transphobia/lesbophobia

The movie revolves around Adam, a cisgender male who discreetly and regularly watches his older sister, a lesbian, have sexual intercourse with her female partner. This enhances his sexual desire and he decides to, quite literally, dress up as a transgender to become a part of the community and have sex with oblivious lesbian girls.

Accompanying his sister to New York’s lesbian and transgender circles with his new-found identity, he manages to get physically intimate with a lesbian girl. Eventually, Adam comes clean about his real identity to one of the women, who not only forgives him but also reveals that she’s fallen in love with him. She goes on to tell him that she fantasised about him being a “real boy” anyway, and hence not only does she not mind him lying to her but also feels “cured” of her lesbianism. Yup, you read it right!

If we are to unpack the nuances of this film, voyeurism is among its first. I fail to understand how a storyline that involved a boy watching his older sister engage in sexual activities went even beyond the pitch phase. The idea is extremely disgusting to even begin with and highly unsuitable to be used as a premise of a film. Needless to say, it completely ignores the concept of boundaries, consent and invasion of privacy.

The movie’s portrayal of sexual orientation as a costume that one can put on whenever they wish to is immensely problematic in several ways. Firstly, it delegitimises sexuality to a large extent and perpetuates the myth of sexual orientation being a choice. The propagation of such ideas by the media influences the common understanding of the issue and misleads people into believing false versions of it. In an era where people of the LGBTQ community greatly struggle and suffer because of their identity already, trivialising it is highly unethical.

#BoycottAdam bc perpetuating a gross fetishizing account of a cishet rapist fantasizing about raping lesbians/wlw under the guise of being a pre-op trans man is harmful to transmen, transwomen, lesbians, and the lgbtq community as a whole too for questioning trans & lesbian folk

#boycottadam it’s 2018 and y’all think the LGBT community needs a movie about cis men lying about being trans men so they can rape lesbians.

Moreover, it reinforces the misunderstanding that transgender people do not possess a genuine desire and are merely predatory beings with intentions of convincing people to engage in sex with them. This is a widely-believed notion and Trans Exclusionary Radical Feminists (TERFs) often slam transgender women for it. Watching Adam do the exact same only strengthens this notion and aggravates the problem.

this is literally terf propaganda lmao, geez i wonder what their intentions are with this. a terf definitely came up with this. that moment when transitioning to rape lesbians doesn't happen irl so you gotta make it happen in fiction #boycottadam pic.twitter.com/SVb7mbmqQx 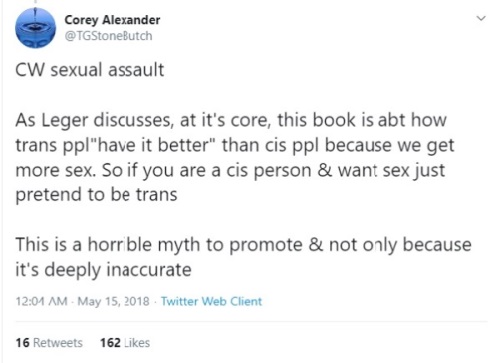 Another very offensive feature of the film is its portrayal of lesbianism as a condition that can be cured with a man’s intimacy. The second girl Adam engages in sex with not only claims that she’s been “cured” of her lesbianism after the act but henceforth starts identifying as a cisgender woman permanently. Being born with a sexual orientation that isn’t widely accepted leads to various forms of harassment millions of people from the community deal with on a daily basis. Depicting it as a problem that needs ‘curing’ and as a ‘fixable’ phenomenon is plain wrong. It significantly discredits the authenticity of lesbian women.

It is quite surprising, and of course disappointing, to note that transgender men have the least amount of representation in the movie, as compared to other identities represented in the film. Hiring a cisgender to play a transgender man is utterly unnecessary when an actual transgender man could have represented his sexuality in the most genuine way. Casting a transgender man and giving him exposure, even if in a poorly-made film, would have meant a lot to the community as well, at least more than picking a cisgender male to do it. To add insult to the injury, the very few transgender people who were hired for the film were misgendered, lied to and treated extremely poorly. 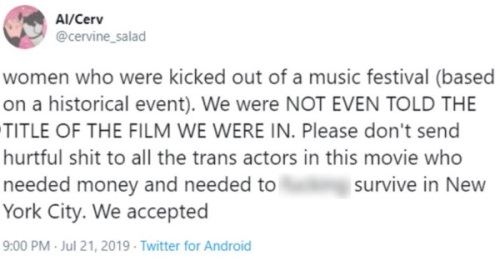 Do not go see the movie Adam. It's incredibly transmisic and the director doesn't care. They also apparently lied to extras about what the movie was. #BoycottAdam

All in all, the film is not only a false depiction of the community and their ways but is a huge insult to them. It is extremely offensive and distorts reality to a great degree. Filmmakers should be a lot more mindful, especially about communities that are already marginalised, and realise that their work has far-reaching consequences. The excuse of the film being based on a book is neither justifiable nor acceptable. There is immense difference in the amount of impact a book and a movie has. Since a movie is more visual in nature, it leaves a deeper impression on the minds of its viewers. Simply basing your entire storyline on that of a book’s without being conscious of its implications is purely unethical. If not revamp, the story could have been at least tweaked in some parts that are threatening to people’s mental health.

This film may cause extreme harm to the trans community – and right now we, as vulnerable individual do NOT need this!!!! #BoycottAdam

Living in an age where we are in dire need of queer-friendly content, such ‘art’ only tends to ruin the progress we have made regarding inclusion so far, which itself, isn’t a lot at all.