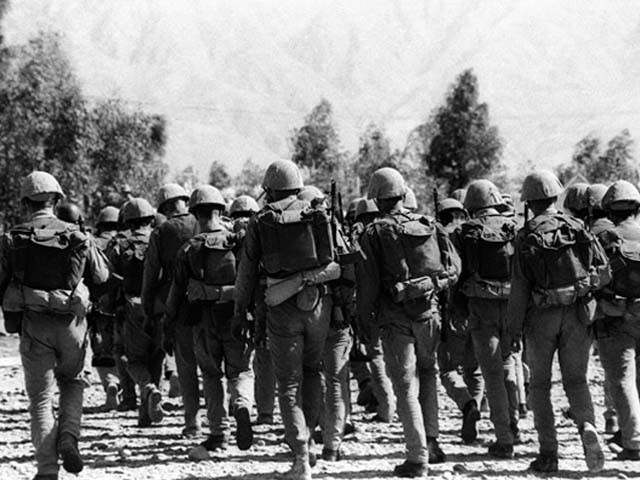 In the November of 1989, ordinary Germans began physically tearing down the Berlin Wall whilst the soldiers of the German Democratic Republic (GDR) stood by doing nothing. Throughout Europe, communist regimes that had been imposed on largely non-consenting populations were falling. The global media remarked that all of this happened without a shot being fired, the exception being Romania where two shots were fired — one into the head of the dictator, Nicolae Ceaușescu, and one into that of his wife.

However, this seemingly neat and tidy story of how communism fell in Europe is rather illusory, because throughout the 1980s, there was a very hot and bloody war being fought between the forces of the communist and anti-communist world. But the final showdown was fought far from the streets of Berlin, Prague or Bucharest.

The Soviet invasion of Afghanistan in December 1979 was a watershed moment in both Asian and European history. During America’s war in Vietnam, the US soldiers were fighting in an internationalised civil conflict in a country that had only recently achieved independence from a European colonial master. The Soviet invasion of Afghanistan was an attempt to prop up a communist regime that had aroused incredible hatred among its people.

What made matters more serious was that like all modern Afghan regimes, the one that the Soviets attempted to prop up refused to recognise Pakistan’s borders. Not only this, but they attempted to arouse its support base with familiar rhetoric about violent Afghan expansionism into Pakistan’s legally-defined territory.

The war was long and costly for all sides. While the American weapons delivered to the anti-communist Mujaheddin helped to even the technical playing field between the Soviet Union and is opponents, as Ronald Reagan readily acknowledged at that time, Pakistan’s role in the war was a major decisive factor. This is because Pakistan’s Army and it’s Inter-Services Intelligence (ISI) provided a supreme level of professionalism that helped bring discipline to a fight otherwise in the hands of the tough but rugged Mujaheddin allied with Beijing, Washington and Islamabad.

The war ended in a decisive defeat for the Soviet forces who, after 1989, were reduced to merely funding a rump regime which formally fell in 1992 when Moscow ran out of money. And yet Pakistan was not as such acknowledged in the 1990s for the decisive role it played during the 1980s in bringing one of the world’s two most powerful countries to its knees.

There are multiple reasons underscoring the collapse of the Union of Soviet Socialist Republics (USSR), but the financial toll that the war in Afghanistan cost Moscow cannot be overlooked. It was World War I that broke Britain’s economy and forced the world’s most powerful country of the time off of the gold standard. America’s disastrous war in Vietnam ended up forcing the printing of new dollars to fight the costly war. This itself was a major contributing factor to America closing its gold window in 1971. America’s once-precious gold window did not open again.

In the 1980s, the USSR fought the longest war of its post-1945 history. The war lasted longer than the Great Patriotic War of 1941-1945 and still ended with a costly and ignominious defeat. Just like World War I set in motion Britain’s long-term decline and the war in Vietnam ushered a period of decline in the US, the Afghan war was Soviet Union’s equivalent.

With the USSR unable to defeat the Mujaheddin and its Pakistani ally in Afghanistan, Moscow lost the confidence to fight for communism in Europe. Had the war in Afghanistan resulted in a speedy victory for the USSR, Moscow may have well-mobilised its troops in Europe in 1989 in the way that troops were sent to Afghanistan in 1979.

While the US and China provided the Mujaheddin with supplies, it was Pakistan that helped them with the fighting while providing top-class intelligence. In the war that ended up being the Soviet Union’s last, it cannot be forgotten that Pakistan dealt a decisive blow to its enemy on the field of battle.

While communism in Europe came to an end peacefully, one cannot forget the sacrifices made by Pakistan to secure this freedom when, during the 1980s, Pakistan was on the front line against the final war that pitted Soviet communism against its chief opponents.