Heer Maan Ja: And the award for the best Eidul Azha film goes to… 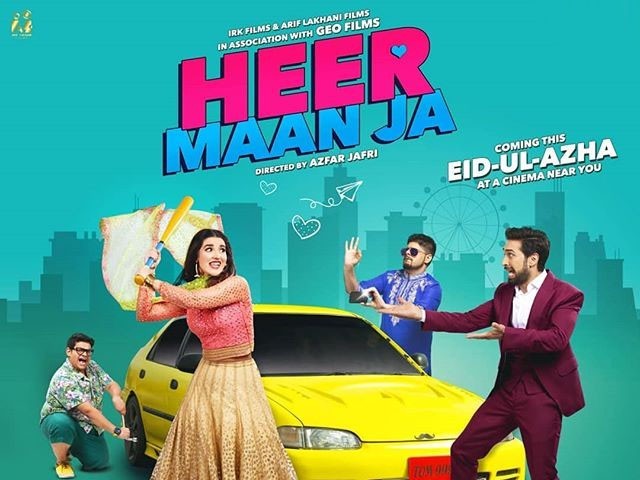 The theme, direction and music of the film was thoroughly entertaining. PHOTO: IMDb

With three star-studded films released on Eidul Azha – Heer Maan Ja, Parey Hut Love and Superstar – the competition to succeed at the box office was fierce. In this race for ratings, Heer Maan Ja truly stood out for its unique narrative.

IRK Films introduced us to the world of Heer (Hareem Farooq), a young soon-to-be-married woman on the run from her conservative family. However, along with its entertainment aspect, the movie propelled its viewers to reflect on its hidden message about honour killing as well. Including a socially important message, Heer Maan Ja fulfilled its duty of responsible filmmaking. All in all, the movie emerged as a winner because of a whole host of factors.

To begin with, Hareem, Ali Rehman and Aamina Sheikh delivered noteworthy performances that were thoroughly enjoyable. They lived up to their characters and outdid themselves with their phenomenal acting. Hareem and her father, Abid Ali, provided the much-needed zing factor. This father-daughter relationship was a significant part of the storyline and they did not disappoint us at all.

Moreover, the robust chemistry between the lead pair, Ali and Hareem, was the core of the film that included quite a lot of comedy and a bit of trouble. This duo has previously shared the screen too, and their camaraderie and interplay as actors shines through every single time.

Moving on to the direction, this was Azfar Jafri’s fourth consecutive project with IRK Films as a director, and he impressed us once again with his work ethic. His style of direction suited Heer Maan Ja perfectly, perhaps better than its predecessors. Its brilliantly shot music videos had that X-factor backed with powerful cinematography. Azfar proved that there is immense room for experimentation beyond the conventional standards of filmmaking.

The producer, Imran Raza Kazmi, has managed to resuscitate a small-scale entertainment industry in Islamabad. And with that in mind, he came up with a creative strategy to keep the viewers hooked for two and a half hours with comedy, romance, drama and a powerful social lesson. He, along with his team, provided the movie with much-needed soul and sentiment. This has long been apparent in previous IRK films as well but it looks like the team is slowly trying to push the boundaries of Pakistani cinema.

Two additional features that made the film worth watching were its choreography and music. The title track, choreographed artistically, was the most appealing, being an original and not an offshoot of some sloppy song. Sahara UK outshined themselves with another amazing dance track, Addi Maar.

It is quite rare for a film to integrate different genres. Heer Maan Ja challenged that by incorporating drama and romance that took us on a roller coaster ride. For that reason, it is unfair to classify it only as a comedy film.

All in all, the movie was a crowd-puller. The theme, direction and music of the film was thoroughly entertaining. There were no loose ends and each character got closure, especially Heer. Many stars made brief cameos that positively influenced the story. With emphasis on minute details, the film was shot and acted out smartly. Go watch for yourself and see how it turns out for you!