A father’s gift on Eid 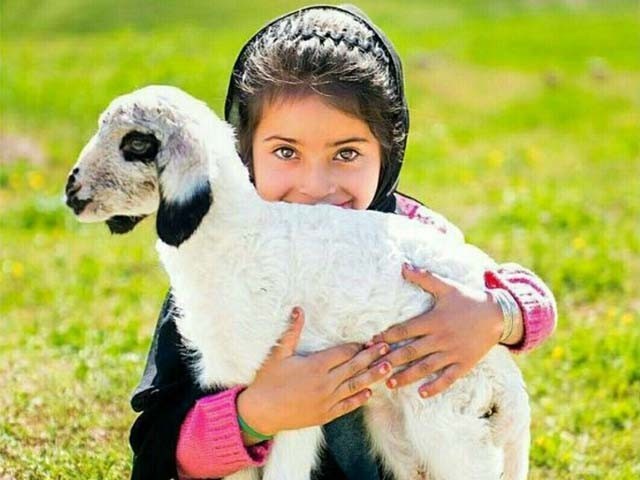 Her laughter blossomed in the air like flowers in a field. Farid had never seen her happier. PHOTO: PINTEREST

“Sahil, can I play with your goat?” Feroza asked nervously.

“You can’t touch my goat,” Sahil’s face paled with anger.

Feroza’s eyes were suddenly watery with tears. She bustled away, embarrassed.

Sahil always treated her disdainfully, as if she were something unclean. He never let her close to his things. He always told her she was ugly and poor and that when he grew up, he wouldn’t let her live in his house.

When Feroza was back in her room, she thought that if she had a goat of her own, she wouldn’t have had to ask Sahil. But Abba (father) had clearly told her that he didn’t have enough money to buy one for her.

Feroza closed her eyes, and a single tear trickled down her face.

Farid spent the whole day working in the kitchen. There was always work piled up for him. Baji (madam) and Sahib (sir) only let him go to his quarters late at night, before they retired to their room.

Farid felt a pain stabbing his arm as he placed the crockery on the shelves. He realised he was old now and easily tired. His body ached all over and he couldn’t work all day. He was weaker than before. His clothes hung loosely on him, and his skin looked drawn. He felt as if he were a different man now.

When he got free from work that night, he lingered in the garden before returning to his room. Overhead, the sky was dark blue and glowing with stars. Farid felt a sinking feeling in his heart.

He was thinking about Feroza. She was growing up. Her eyes twinkled with dreams that might never come true. The thought filled him with sadness.

She had told him she too wanted a goat for Eid, just like the one that Sahil’s father had gotten for him. Farid told her that he was too poor. He bought her new clothes for Eid, but that was all he could afford with his meagre income.

As the night dragged on, Farid’s thoughts scattered into the hot summer air. He strolled in the dark night for hours.

At dawn, as the colours slowly crept back into the world, he returned to his room and sank into a deep sleep.

Abba burst into the room and said,

“Feroza, there you are. Pack your things, we’re going to the village.”

Feroza didn’t know a world outside Lahore. She didn’t even know they had a village. Abba had never told her. She still found it hard to believe him.

Abba reassured her that they had a beautiful village that was hours away from Lahore and that she had to hurry up. A shadow of doubt crossed Feroza’s face, but she got up and packed her things.

Eid was only a day away and the bus station bustled with people. A wave of excitement washed over Feroza. She had never seen so many people in one place.

When she sat on the bus, with Abba beside her, she only thought about her village and what she would do there.

They reached at sunset. Farid unlocked the house and showed Feroza in.

“This was my parents’ house,” Farid’s voice cracked. “I grew up here.”

Feroza’s eyes twinkled. He realised he had made the right decision by bringing her here for Eid.

“A lot of people around us have goats, and they’ll let you play with them, unlike Sahil,” Farid smiled at Feroza.

The next day, Farid showed Feroza around the village and took her to his relatives’ houses. Feroza got along with everyone. She played with their animals. Her laughter blossomed in the air like flowers in a field. Farid had never seen her happier.

Feroza cried bitter tears when the butcher slaughtered three goats in the courtyard.

Farid squeezed her hand and told her this Eid was meant to teach them the importance of sacrifice.

At night, Feroza lay huddled next to Farid on the charpai (woven bed). There was silence around them except for a fan whirling noisily above them.

Farid didn’t answer. He only looked at her sadly.

The sky was clear blue, and a biting wind wafted in the air. It was Feroza’s and her father’s last day in the village.

Abba looked glum. The lines on his face had deepened in one night, and he looked years older. Feroza knew he was upset about leaving his parents’ home. And she was too.

Back in Lahore, Sahil made fun of her and Abba. No one talked to her, no one played with her. But in the village people were friendlier. They were more like her.

When they finally stepped out of the house, with their belongings swinging behind their backs, Feroza looked back with tears in her eyes.

“This is my true home,” she whispered.

Abba looked down at her, his eyes dark pools of sorrow. She realised he was crying too.