Political rallies: Mine’s bigger than yours 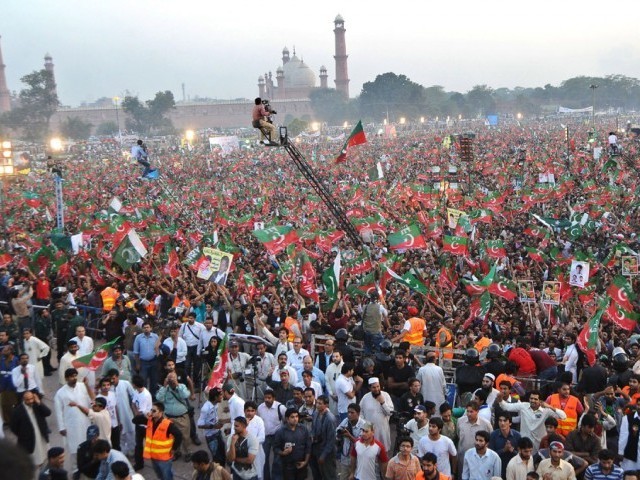 The PML-N accused the PTI of using chairs at its rally to spread people out and make their rally appear larger than it really was. PHOTO: AFP

Much of the overt political action this week shifted from Islamabad to Lahore, in recognition of the fact that whoever controls Punjab will control Pakistan. Competing rallies, both ostensibly anti-government but also meant to target each other, were held by the PML-N and the PTI in Lahore. Back in Islamabad, though, all parties were busy spinning their rallies while engaging in behind-the-scenes machinations.

Depending on which vested interest you believe, the PML-N rally drew anywhere from 20 to 90 thousand people and the PTI rally between 40 and 200 thousand supporters. Politicians who wouldn’t know a quadratic equation if it hit them in the face were busy giving lessons in mathematics to everyone within earshot. They accused their opponents of inflating or deflating rally numbers and claimed that most of the participants were only at the rally because they’d been given currency notes and a hot meal.

The PML-N accused the PTI of using chairs at its rally to spread people out and make their rally appear larger than it really was; the PTI countered by accusing the PML-N of holding its rally in a narrow road to project the illusion that there were so many people they didn’t even have room to breathe.

Plenty of victimisation was on display too, especially from the perpetually-aggrieved PTI. Hours before the MQM rally in Karachi in favour of President Asif Zardari – yes, in Pakistan those in power rally in favour of the status quo – PTI members started contacting the media to complain about how television channels were ignoring their far more important rally in favour of the MQM one.

But for some the rallies were nothing but a sideshow. One talk-show host confidently predicted that about three months from now Chief of Army Staff General Ashfaq Parvez Kayani would announce that he was taking over because of all the political instability. This assessment should be taken with a pinch of salt since there is nothing Pakistanis like more than seeing the military bogeyman around the corner. But, even if the military doesn’t actually take over, no one can deny that GHQ wouldn’t be licking its lips at the thought of all political parties at each other’s throats.

The Presidency, meanwhile, had other fish to fry. The president’s office released a long statement devoted entirely to condemning Mansur Ijaz. Ijaz had written a column for The Financial Times a couple of weeks ago, claiming that he had been tasked to deliver a letter to the Americans from the president, asking for their help in removing Kayani as an obstacle to the civilian government.

The unusually long statement recalled that Ijaz had approached Zardari in the 1990s, seeking a meeting with his wife, the then-prime minister Benazir Bhutto. When Zardari told Benazir about this, she dismissed Ijaz as someone who had no credibility. The statement then went on to mock and belittle Ijaz for his wild imagination and delusions of grandeur.