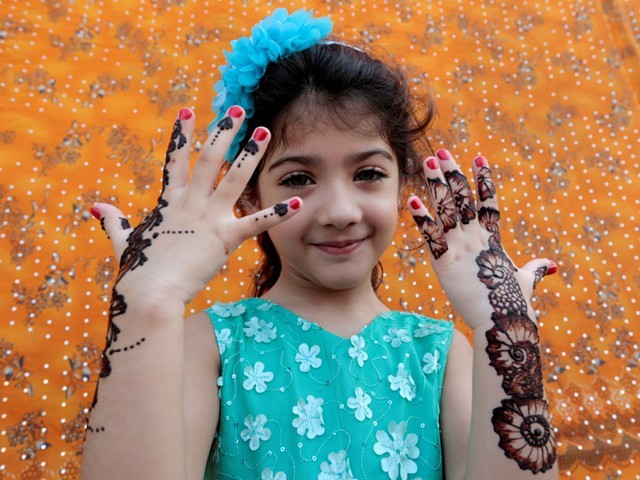 A girl shows mehndi (henna tattoos) decorating her hands and arms ahead of Eid in Islamabad. PHOTO: REUTERS

Eidul Azha, in my mind, has always been a ‘lesser’ Eid. It has always existed under the shadow of Eidul Fitr. As a kid, it seemed ill-fitting to call Eidul Fitr a choti Eid because it held greater significance in my mind. It might be bari Eid for a warm-blooded carnivore like my father but not me.

Eidul Azha, in my recollections, used to be three days of endless feasting. And feasting cannot be done alone; it is a communal activity that sparks a special kind of hunger. Even if you aren’t hungry, you still eat the delicious meat; sitting amongst your friends and family, you are obligated to. Moreover, feasting cannot happen without you looking your best! I remember sitting in my crisp new clothes with over-sized bangles clinking down my wrists as I reached for a niwala (bite) from a plate of korma that my mom hurriedly cooked after getting the meat from the butcher.

In Islamic canon, this day is celebrated to honour Hazrat Ibrahim’s (AS) willingness to sacrifice his only son after being commanded to do so by Allah (SWT). It is also a day to mark the divine miracle that replaced Hazrat Ibrahim’s (AS) son with a lamb at the time of the sacrifice. To celebrate this heroic tale every year was fascinating to me.

It meant celebrating obedience, unwavering belief, and a timely intervention by eating and sharing food with your loved ones and people in need. This one sacrifice led to so many hungry mouths being fed, so many loving memories being made and so many meat dishes being invented, experimented and perfected.

My grandmother’s house was an anchor that collected all my family members on this day to commence the celebrations. As years passed by, without realising, that anchor detached so many ships. In the winter of 2010, my grandmother sent her goodbyes and prayers from Quetta as my family moved to Karachi. My family tried to recreate that anchor at our house with a few of our relatives who had also moved to Karachi in search of a better lifestyle. After a few rocky starts, we managed to build it. We delved in the trend of barbecue that Karachi was so fond of, and in one brief moment, we had captured the spirit of Eid.

However, that moment was fleeting and we had to let go of so many people. My grandmother passed away, my cousins grew up and I moved to Lahore for my studies. I reiterate that this holiday, much like other holidays, is a communal one. It is not meant to be celebrated alone. And so, the food no longer tastes good, the clothes do not make me feel pretty and the stench of blood and entrails grows stronger each Eid. It is not just me who feels this way; it is a loss felt by my friends and my family too.

Blaming capitalism, westernisation, hedonism or other ‘evil’ external forces that are out to harm Islam and its practices is not my intention. I am simply observing life pass by and change things. This slump may be indicative of me growing up and not wanting to face adulthood but I think it is much more than that. It is indicative of an evisceration of a tradition and, inevitably, an evisceration of the self.

In college, I read a story about the American bison. In Native American culture, buffaloes played a huge role as several tribes hunted them for food and clothing, but honoured and respected them as their major source of sustenance. Their lives were oriented around the thunderous arrival of the herd of buffaloes every year. However, the US government, in an effort to defeat the Native American tribes, wiped out more than half of their population and brought them close to extinction. In the famous tribal chief Plenty Coups’ heartbreaking words,

“After this, nothing happened.”

Nothing happened. Their worlds ceased to exist. Time, and everything that came along with it, stopped. Since then, their communities have thinned and pushed to the fringes of society.

To say that I share a cultural devastation similar to that of the Native Americans would obviously be wrong and disrespectful to the insurmountable grief that they suffered and continue to do so. But this can allow one to imagine the potentiality of the erasure of our culture. This can rekindle special love and attention towards our cultural practices. And it can encourage us to respect other cultural and religious events that people choose to orient themselves around and are intrinsically tied to.

Take another example to portray this. The Niha people living in Nisa, an island located in the far west of Indonesia, lived for feasting. Their feasts involved inexhaustible quantities of food and guests, and were a major opportunity for gift exchange to sustain their economy. However, environmental devastation led to the death of those ‘feasting cycles’. The people there explained that their feelings were that of a “painful heart”; a heart that is seething with pain, anger and envy.

We do not exist in a vacuum. We are vulnerable to our own creations. We stand under the comforting shadow of these practices that make our lives meaningful. This Eid, it becomes my personal goal to not let this special day pass by without gratitude and celebration. And to honour all that is tied with it.