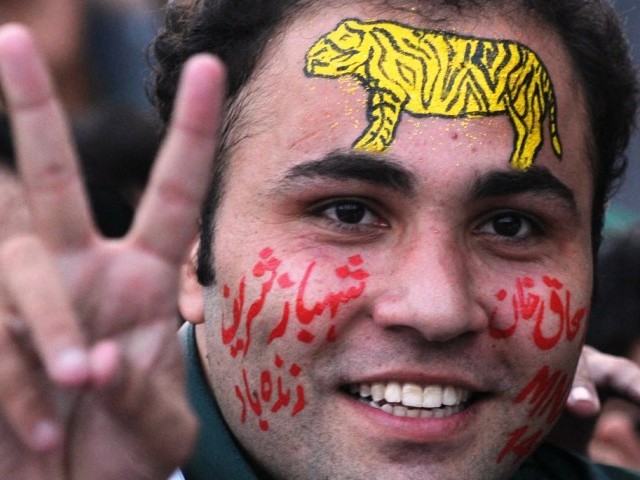 A supporter of Pakistan Muslim League-N (PML-N) flashes the victory sign during a rally against Pakistan's President Asif Ali Zardari in Lahore on October 28, 2011. PHOTO: AFP

How does one measure the “success” of an anti-government political rally? Do you go by the statement of the political party itself? Do you talk to its supporters? To irritated residents in the vicinity who complain about traffic woes and noise pollution? Or do you gauge the temperature rising in the capital in its aftermath?

The anti-government rally lead by the Pakistan Muslim League –Nawaz (PML-N) on October 28 was prominently covered by the local press and dominated conversation in Lahore on Saturday. News anchors dubbed the event as “kamyab” (successful) in the 9 o’ clock news bulletin, complete with sound bites of enthusiastic supporters professing their love for the Sharif brothers.

From the entertainment perspective, the rally earned two thumbs up; there were clowns on stilts, a would-be groom who swore he wouldn’t marry till the government stepped down and a real, ferocious looking tiger who a supporter claimed “made clear by his behaviour that he wanted to attend the rally.” Also, who knew that Shahbaz Sharif could sing?! His rendition of Habib Jalib’s Dastur was moving; not only did he hit the right notes, he also delivered the words with feeling.

On a more serious note, it is important to weigh the statement coming from the opposition and the impact it will create. Shahbaz used heavy words to address President Zardari; he called the president “Ali Baba” and his friends “40 thieves”, and also added that “they will fight Zardari like they fought dengue.”

A visibly charged Shahbaz went further to say that Zardari will be hung “upside down” and that there will be “many Tahrir Squares” all over the country. But isn’t it ironic that a sitting chief minister who was all for the Charter of Democracy is now using derogatory language to address the head of the state?

If anything, one thought that came to my mind yesterday was the strong support the Sharif brothers had when they marched to reinstate the Chief Justice in 2009. Looking at the roaring crowd of about 50,000 gathered by Shahbaz alone and the growing appetite for elections, the message delivered to Islamabad is a strong one: the PPP needs to come up with a better strategy if it wants to stay.

What Mathira and Paris Hilton don’t have in common