The deepening crisis: child rights in a negative society 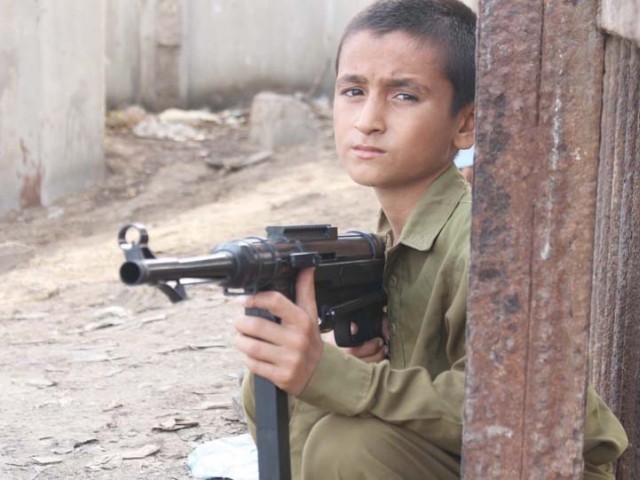 A child poses with a toy Kalashnikov. PHOTO: PPI

On July 17th every year, we celebrate the ‘World Day on International Justice’. Over 120 countries adopted this statute at the International Criminal Court (ICC) in Rome, creating a permanent international court to task criminals. The anniversary is for taking a day out to reflect on the successes and challenges of bringing justice and countering violence.

The recent United Nations (UN) casualty report has greatly undermined the gravity of the deepening crisis clearly demonstrating undue favouritism to certain countries that have been accused of the violation of child rights. One of the biggest casualty counts is the Yemen crisis, led by Saudi Arabia and its allied forces in 2008. Despite hard evidence that points to the undisputed killing of children in the armed conflict, besides millions suffering from famine and hunger, with a total number exceeding over 700 child casualties, they have not even been given a warning.

Palestine recorded the highest number of child casualties in 2018, with over 59 children dead and 1,398 children injured, by the Israel Defence forces. In Afghanistan, there were 286 casualties, triple the amount that was reported in 2017 in a war that rages until now, as the United States allied forces continue to fight an endless battle. Further reports indicate 113 child deaths in Somalia and over 23 killings in Ukraine.

According to the Human Rights Watch, the UN annual report has refused to hold accountable the responsible countries, thereby not making any efforts to protect children living in conflict zones. The UN’s ‘B-list’ includes countries that have a seriously flawed record on war crimes. By recommending  ‘improvements’ rather than taking punitive measures such as armed embargoes, travel bans or assets freezes against them, the UN ignored human rights and child rights.

Children suffering in war zones around the globe are being disregarded as the arms race continues and war zones increase.  Security agencies continue to fail in adopting a unified strategy. Child soldiers are being recruited as an outcome of war, taking up weapons of war or being subjected to the worst form of slavery. These memories of war in children are creating dangerous futures where they are absorbing the impact of war and turning into criminals themselves. In the eyes of the children, war is becoming an acceptable way of life, leading to a new breed of soldiers – the war children.

In Pakistan today, children are undergoing major challenges because of its volatile society. Increased access to negative media and violent online content poses a high risk to children who are in their development stage. Even in peaceful societies, there is a need to curb violence and extremism. As individuals committed to social uplift, we, as adults, need to spare a few hours each day to spend quality time with our children, as their parents, mentors and teachers.

The UN Charter of Human Rights Article 31 on children rights clearly states that all children have the right to live and thrive, learn and play in a secure environment and have access to basic rights. The reality, however, paints a concerning picture as the children living in conflict zones are under constant threat of being subjected to war crimes that go unreported. The Global Charter on Child Rights binds every country to protect their children in the state of war.

Why do children suffer in negative societies and why are their rights compromised?

According to experts, an increased number of out-of-school children in Pakistan carries a high risk of child recruitment in war zones, youth crimes and child sexual abuse of street children. Gun violence, globally, has led to many severe casualties in developing nations, and the same is happening in underdeveloped countries where children are at the center of the battle.

The illegal trafficking of children in Pakistan is another major crime, needed to be punished by the law. A negative society creates a traumatic childhood for children, where they go through neglect and abuse, which affects their early growth and memory. The search for a better life, basic shelter and hygienic food is becoming a challenge for our younger generation. Civil disorder and poverty is a major cause of increased insecurity among the masses, eventually being passed to our children.

Approximately, over 3.8 million children between the ages of five to 14 are being subjected to forced labour, begging and exploitation, according to the Federal Bureau of Statistics. These children are then forcibly recruited into extremist and non-state militant groups where they suffer sexual and psychological abuse. Reports of child sex trafficking between Iran and Pakistan borders have risen over the years.

Pakistan has over 1.8 million bonded labourers; mostly young women and children who travel in countless numbers from rural villages to big cities in search of work and are illegally recruited to industries. The Ministry of Interior has a ‘National Action Plan for Combatting Human Trafficking’ to guide the country’s responses to modern slavery. The plan is supervised by the Federal Investigation Agency (FIA), through its anti-trafficking unit, though this unit’s budget, capacity and level of training remains unknown to most people. The FIA needs to focus more on child slavery inside the country due to poverty and transnational trafficking. The Pakistan Penal Code also needs to be aligned with this task force to remove gaps and identify the actual numbers of those being criminally abused. It does not appear that there is an effective coordinating mechanism for the government’s multiple responses to modern slavery.

Pakistan has yet to secure a conviction in over 20 years, under the forced labour laws through the Bonded Labour System Abolition Act (BLSA) of 1992. Apart from Punjab, no other province has enacted laws on bonded labour due to lack of focus by the government on the deepening crisis.

Provision of useful tools and techniques to children at an early age ensures clarity, confidence and comfort to children, builds child-parent trust and enhances positive development. The society has a responsibility to ensure that children are given the right cultural and social environment in both homes and schools, and more personal care must be ensured by all parents to further combat this challenge.

We must also identify domestic issues within households. For example, why does a child lie to a parent? It has nothing to do with the media, education or society. All it has to do with is home psychology. When a parent replies to their child rudely, the lack of empathy on the behalf of the parent leads the child into seclusion and, consequently, to the lie. If your children lie to you, then you can never know what is going on in their lives. The problem with most children today is an attention deficit, a feeling they carry during their teenage years that stems from feelings of being ignored or isolated by a parent at any given point in their lives. An attention deficit puts your child at risk of seeking attention elsewhere, that makes them likely to get involved in criminal activities or drug abuse.

Pakistan has a weak track record on ensuring child rights, whether it is in schools or at home. Parents are misguided; they openly complain about their children, stating their negative behaviour patterns without analysing the root cause. Some children develop anger issues due to parents not highlighting the positive behavior of the child. Here, the child feels threatened and starts to defy the parent. Mostly, these children end up becoming rebels without a cause, get frustrated at insignificant issues and start to distance themselves from the family, leading towards a negative future. Teachers, too, sometimes lack the moral discipline required to manage children.

On International Justice Day, Pakistan must also take action. Providing a happy and secure environment for children is every child’s basic right. The media also has to realise its responsibility by producing child-friendly content. Social media has to be monitored and restricted against the use of any text, imagery or content that is harmful to children. In order to ensure a safer Pakistan for our future leaders, efforts should be made to revive holistic development for children in our society.