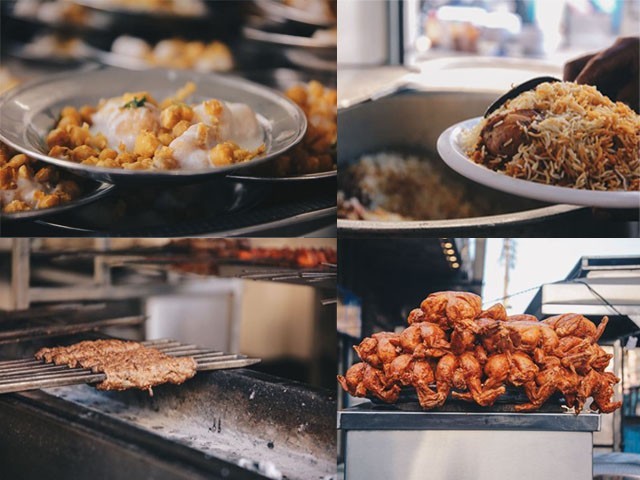 A question that sometimes induces a little unease is that why is food the only form of entertainment Karachi resorts to? PHOTOS: ALI ANAS/FILE

As a Karachiite, not even a day goes by without hearing about the launch of a new eatery in the city. On some days, it’s a fine-dining restaurant presenting an unusual variety of a relatively unexplored cuisine. On other days, it’s a café with a new vibe, interior or facilities. Or on most days, it’s our favourite go-to spot – a chai dhaba.

Almost all renowned areas of Karachi are famous for not just food outlets but entire food streets that are insanely popular. Boat Basin in Clifton, Zamzama in Defence, Burns Road in Saddar, Bukhari commercial and Port Grand in West Wharf are just a few examples. While it is an area Karachi has excelled in and that definitely is something to be proud of, why is it our only area of focus?

Had Karachi not been resourceful enough, the question about excelling in other areas would have still taken a backseat. But being the metropolitan city of Pakistan with the largest land area, it is resourced with public attractions of all kinds. It just doesn’t invest the capital, time and energy it invests in its food business. What that leaves it with is, quite unfortunately, the state of its culture, arts and natural wonders becoming progressively worse while its food thrives. In fact, the current situation is a consequence of not only a lack of investment but a significant amount of neglect.

Lahore, the socio-cultural hub of Pakistan, for instance, has an edge over other major cities of Pakistan because of how rich it is in heritage. The Walled City of Lahore, also known as Androon Shehr, is the cultural core and the historic heart of Lahore. Bestowed with some of Lahore’s most iconic monuments such as Lahore Fort, Wazir Khan Mosque, Badshahi Mosque and the Royal Bath (Shahi Hammam), it is also the Mughal capital.

Islamabad, another major city of our country and the capital, also has an edge over other cities because of its natural beauty and how it has worked upon not only its sustenance but also its enhancement. With sightseeing spots and gardens such as Daman-e-Koh, Bird Park and Lake View Park, and natural wonders such as Neela Sandh, Islamabad has quite a lot to offer when it comes to nature. While it may not be the top contender when it comes to food (or even close to it), it provides an unparalleled experience in natural beauty spots compared to Lahore and Karachi.

Having said this, the edge Karachi has over other cities in terms of food isn’t being dismissed. The only issue is the huge potential it has in other areas that isn’t being utilised. In terms of cultural places, Empress Market, Frere Hall and Mohatta Palace are just a few examples. But we all witnessed the tragic fate of Empress Market with ruthless gentrification and mass displacement. Sadly, what once existed as one of the most popular marketplaces of Karachi has now been reduced to broken structures and torn pieces of cloth. Places that are, fortunately, still intact aren’t in the best condition either. Both Frere Hall and Mohatta Palace have little to offer and barely make it in the itinerary of tourists exploring Karachi. In terms of nature, it isn’t as if Karachi is completely devoid of natural wonders. In fact, being a port city, we are extremely blessed with the magnificence that is the Arabian Ocean. However, its pity-worthy current state is a tragedy. With tons of plastic floating in the water and heaps of trash piled up on the shore, Karachi beach is in a disastrous condition. A little attention and focus has the power of immense transformation, but sadly, there is a huge lack of concern.

The famous Hill Park, which was once known for its ducks, is now known as a safe haven for drug addicts and an alarming situation of its pond. The absence of any efforts from municipal and law enforcement agencies allows easy access and usage of drugs in Hill Park and that, in turn, has been one of the biggest contributors to its decline. More importantly, the water from its pond has completely dried up leaving behind nothing but a handful of unfortunate ducks. There have been individual efforts to attempt to fix the crisis but all have gone in vain. A fairly huge public place that has always been run as a government property cannot be run by a bunch of people playing their parts. It would be unfair to say that Karachi has made absolutely no effort in working on attractions other than eateries. Relatively new initiatives to promote local culture, literature and arts such as Cafe Commune and TDF Ghar are just a few examples. Cinema 73, the only open-air cinema of the city, is another attempt to revive the open-air theater trend of the late 90s. Not just places, but events such as the Creative Karachi Festival, Karachi Literature Festival and the Karachi Biennale are proof of how the city does attempt to fix the imbalance. However, the number of cultural festivals compared to a food festival happening almost every other month is the biggest example of how we have a long way to go. Similarly, a comparison of the attention and interest these places garner as compared to a new food street is enough to prove the point here.

All of this isn’t to say that food isn’t an aspect to take pride in, or that Karachi has no cultural or natural attractions. The only question that sometimes induces a little unease is that why is food the only form of entertainment it resorts to? Despite having endless potential to shine in other areas, why does Karachi remain so obsessed with food?