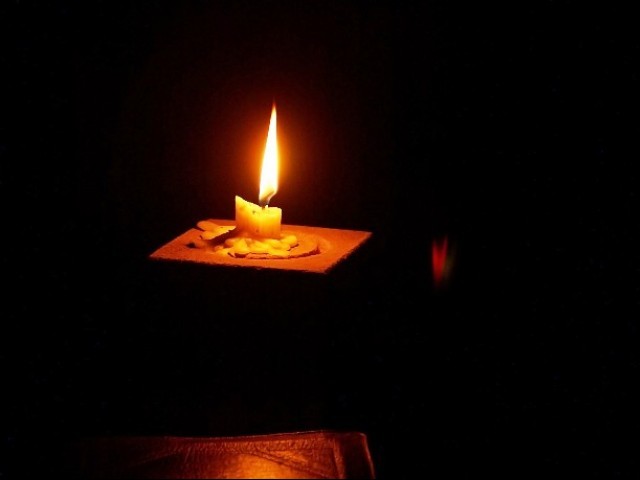 When both the KESC and the generator fail you know it’s time to turn into Fred Flinstone. You look for candles and curse yourself for throwing that lantern your grandfather had.

Feelings of being enraged; feelings of wanting to go out on to the streets and protest (not in a revolutionary mood though); feelings of smacking someone right in the middle of their head; feelings of sometimes shouting out loud in a helpless cry, and sometimes in a defeated sombre sigh.

These are just some of the feelings, when the letters C, E, S and K are arranged in the order of KESC.

I can already sense disgusted frowns appearing on some faces. Those not in Karachi probably have a victorious smirk on, or are thanking the Lord for His graciousness – aren’t you happy to have left these four letters behind in Karachi for us chosen ones?

On a serious note (not that I am exactly brimming with delight at the moment), as much as I despise KESC, credit must be given where it’s due. Credit for making us remember the Almighty several times in a day when we say:

And credit for giving the ‘circle of life’ a new definition. Whatever the wise men thought while penning this term, it surely has a new, contemporary dimension to it, courtesy KESC:

1) Waiting with a heavy heart for the electricity to go any moment (or sometimes at scheduled timings).

2) Turn on the generator or the UPS when the inevitable event occurs.

3) Switch to an alternate method when one of either the generator or UPS gives in.

4) Switch back to the KESC connection if the electricity ever comes back.

That’s where we come full circle. And that’s where the ‘yippee’ expression emerges, deep from the stomach with heart-felt joy. The elation, however, is short-lived. Point four, unfortunately, is also the beginning of Point one.

In between, there is the constant running to and fro trying to keep your generator and UPS in shape as on a day like today (which is any normal day in Karachi), they produce about 8 hours of electricity for me. KESC strongly believes in the ‘shock and awe’ method, where the awe comes from the returning of power, and the shock from the fluctuating voltage. Whenever we are in awe of the electricity returning, it is followed by a shock of low voltage, which damages electrical appliances.

Like most, I have also had days when after a prolonged series of huffs and puffs my generator gave up with a handwritten note:

“I am not a power plant you know.”

This is when you fear a disruption in your circle of life and search for a generator mechanic frantically. That in itself is akin to crisis because you know generator mechanics have the attitude of Chuck Norris. To add further spice to situation, your UPS starts blinking the ‘low battery’ indicator and you know your worst fear is staring you in the face.

If you have any luck, you will be able to find your Mr Life Saver (mechanic) just in time, and if not then, you know it’s time to turn into Fred Flinstone. You look for candles and curse yourself for throwing that lantern your grandfather had 60 years ago. Your children watch candles with amazement and curiosity till they get bored while you remain in a fit of half rage and half prayer. Oh, and did I mention every life saver has its cost? Let’s just say it’s pretty steep.

Coming to cost, this circle of life also has a radius. In other countries it might be known as electricity bill, but it is KESC’s answer to Quentin Tarantino’s ‘Kill Bill’, minus classic dialogues, but with a killer soundtrack of its own. This soundtrack usually contains an anguished scream. Unlike Tarantino’s Kill Bill, we get to see a new sequel every month. I am expecting mine any time now.

There is a lot one can write about this power crisis, but I am at the point three of my circle at the moment.

Have to turn the generator on. UPS just gave up.

For the family of a dead soldier