An Indian who moved to Pakistan 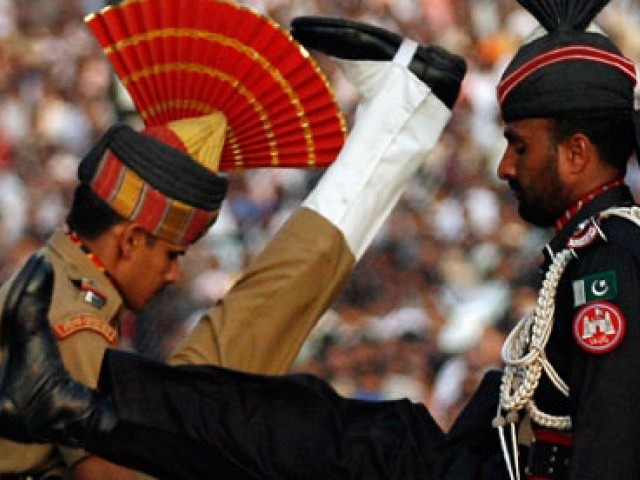 A Pakistani Ranger (right) and an Indian Border Security Force officer go through their drill at the Wagah border. PHOTO: REUTERS

This blog post is a response to an article published in The Express Tribune by Dr Pervez Hoodbhoy titled:“Deepening the Pakistan-India divide.” Hence I address this to him.

I know exactly how you feel. I have been feeling the same every year for the last 20 years when I go to seek a visa for India. I have to fill the same form which is ‘special’ for Pakistani Nationals (and it is the same for Indians in the Pakistan embassy).

I am not a professor like you who gets an invite and a letter to give a lecture at some university. Nor am I an artist who gets to show a business contract for facilitating the visa. In both these cases, to be able to get an Indian visa is much easier than it is for me.

I am an ordinary Pakistani who wants to visit my relatives in India. And every year the daunting question arises:

What if I do not get the visa?

Days before I fill up the forms, my soul shudders with this fear.

But then, why do I want to go to India so desperately each year? No, I do not want to visit some old relatives whom I got  separated from during the partition, nor do I want to see my ‘virtual’ friend or my distant cousins who I reconnected with on Facebook or Twitter.

No, Sir. I seek a visa to visit my parents and brothers. You read it correct – my parents.

It was 20 years ago by the stroke of fate I guess, I chose to marry a Mr Right.  And in that youthful enthusiasm perhaps, I chose to deliberately to ignore that he wasn’t an Indian like me, but a Pakistani. And after having got married I also deliberately chose to take the Pakistani passport knowing that it would be the most practical solution for my family. I have no regrets for either of the decisions I took.

However, each year that I wish to visit my parents I have to stand in the same queue as any ordinary Pakistani would, furnishing the same documents and details, facing the  same scrutiny without being given an iota of consideration that I am Indian-born, and bred in New Delhi for 24 years – an Indian who graduated from a premier medical school in New Delhi.

Sir, I would also like to let you know that my parents aren’t any Indians who’s credentials are hazy or in doubt. Both my parents have retired as professors from Delhi University and are well-known vocal secular individuals. But this does not matter to those who have the authority to grant a visa. To them, I am just a passport number holding a Pakistani nationality.

If my husband travels frequently to India with me, he is taken aside by the non-uniformed personnel in Pakistan, who ask why there are so many India visa stamps on his passport. If I do not travel for three years in a row, the Indian authorities say they need a fresh inquiry about me and that it will take any amount of time, between three months to any unspecified duration for my visa to be approved.

Honestly, I have not had much disappointment in obtaining a visa (though at times I have waited several months),  barring the time  when the Kargil dispute was fresh. This does not happen because of any procedural ease, but because a resourceful relative managedto push for it in the right place. And during the Kargil time, not even the contacts were willing to help.

The visa officers are generally very kind, I must admit. They often sympathise with me, and express their helplessness regarding the matter. Their hands are “tied” they say. And of course, it is a serious “security matter”, I am told.

Over the years, I have seen that the visa procedures take sinusoidal patterns. At times all seems well and the whole process is smooth-sailing. But then some political trigger offsets the whole process, resetting it from the start.

There are many such women like me, but a lot less fortunate, for whom the idea to get a visa to go and see their parents is no less than a dream. For many women, due to financial constraints, the idea to go up to Islamabad from Karachi, to even ‘try’ for a visa is a great ordeal. Many of them have barely seen their parents more than two or three times in the last two to three decades of their marriage.

And no one seems to hear their silent wails.