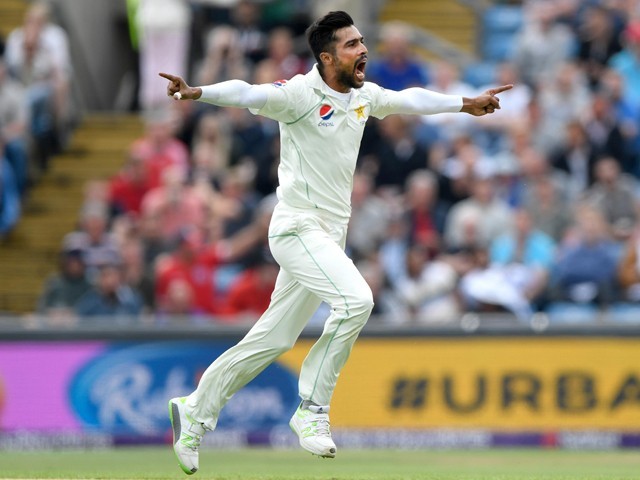 Tt appears that Test cricket has simply not attracted Amir, even though his numbers in the format have been decent. PHOTO: AFP

Traditions are a funny concept. We preserve them for the sake of history but in doing so we sometimes run out of reasons as to why they are relevant anymore. Much like South Asia’s overblown marriage ceremonies, Test cricket is also a tradition that is now being questioned.

It goes without saying that Test cricket is the toughest form of the game, where only the best can survive. Any player that chooses to opt out of it severely dents his chances of being remembered as a legend of the game. But having said that, who are these players trying to prove their worth to if the stadiums remain empty?

Mohammad Amir’s decision to retire from Test cricket at the age of 27, while he is still in his prime bowling years, is more than just a retirement; it’s a verification of the fact that Test cricket is in danger of becoming obsolete. Amir will get called out by many for being selfish, running after money, and for choosing T20 leagues over ‘true cricket’. But can we blame him?

Thank you PCB, our PM @ImranKhanPTI @wasimakramlive bhi @SAfridiOfficial bhi @waqyounis99 & @yousaf1788. Thank you and my fans for always supporting me and I hope you all will support my this decision also.see video link https://t.co/BbAYzPbncl

Saddened by the announcement of Mohammad Amir regarding retirement from Test cricket. No doubt a legend withdraw himself from his playground @iamamirofficial

Amir would probably love to play everything he can get his hands on, but he realises it is simply not possible. There are a limited number of balls his body will allow him to bowl without breaking down and he needs to use his time wisely. With multiple forms of the game on offer, like it or not, he found Test cricket to be the least attractive.

AB DeVilliers was the first high-ranking player to spark this debate when he called for an early retirement from international cricket but said that he would still continue to play in T20 leagues. Given the rise in this way of thinking, I can foresee more announcements of players retiring from a specific format.

Now that their playing years are behind them, it’s easy for Ramiz Raja and Wasim Akram to sit behind the camera and tell others how great Test cricket is. It’s harder, however, to be in Amir’s shoes and other players like him that get selected for all forms of the game, to jeopardise their careers due to fatigue and injuries by signing up for everything. Given the abundance of tournaments and leagues that take place all over the globe, cricket for the modern cricketer continues all throughout the calendar year.

To me Mohammad Amir retiring from Test cricket is a bit surprising because you peak at 27-28 and Test cricket is where you are judged against the best, it’s the ultimate format. Pakistan will need him in two Tests in Australia and then three in England.

Amir white flagging Test Cricket at 27 is disappointing. Besides being dismissive of the greatest format that makes stars & legends his decision is clearly not in in line with the needs of Pak ckt which is desperately looking to reboot test cricket. Was time to repay & not eject.

I understand that supporting Test cricket will make me seem like a ‘true’ cricket fan that holds a deep understanding of the game. However, unlike many fans, I find it hard to be hypocritical. If I don’t ever see myself buying a ticket for a Test match in the United Arab Emirates (UAE) and sitting in the scorching heat to watch a batsman score a double hundred on a flat track, then it’s unfair for me to criticise Amir for opting out of it.

A game’s essence is ultimately in the hands of its players and its fans. Apart from Test series that are played between the top three sides, and the Ashes in particular, empty stadiums are a common sight in Test cricket.

It’s a hard pill to swallow for many, but Test cricket is losing viewership and interest. Apart from becoming out-dated, the International Cricket Council (ICC) played its part in making Test cricket unappealing for the masses, and at times, completely pointless. Letting home sides make tailor-made pitches that suit the home team has ruined the five-day game.

As a result, we get to see plenty of Test matches every year with flat decks that suck the life out of the game. If fast bowlers like Amir can’t even test a batsman because of these dead tracks, then is it really a Test match anymore?

As batsmen pile on runs amidst a sea of empty seats while a few birds patrol the outfield for insects, can one really blame Amir for choosing to hang up his white kit? Given the current state and perception of Test cricket, Amir made a practical decision to focus his efforts on the forms of the game that attract actual viewership as well as monetary rewards. After his return to cricket following his banishment for spot-fixing, it appears that Test cricket has simply not attracted Amir, even though his numbers in the format have been decent.

Money ultimately dictates terms and the truth of the matter is that limited-overs cricket is far more lucrative. Why expect cricketers to play a format that no longer has much to offer other than the title of being a ‘Test cricketer’?

Ultimately, Amir has made a decision to safeguard his own best interests, and it’s not his job to revive Test cricket. Everyone blaming him for choosing to play in ‘easier’ formats of the game should perhaps instead focus their efforts on trying to make Test cricket mainstream again. Until that happens, it looks like many other players may soon ditch Test cricket too.