From Osama to Qaddafi: Grieving for the rest of the world 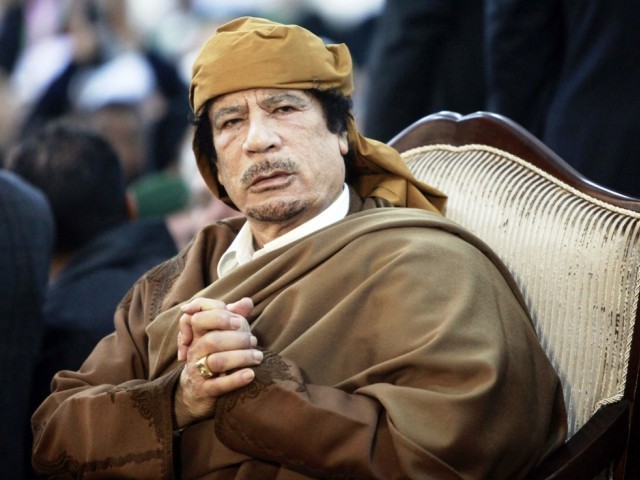 Lawyers in Lahore offered funeral prayers for the man hated so vehemently by his own people that when an overzealous freedom fighter saw him captured, he couldn’t control himself and shot him dead. PHOTO: REUTERS

Pakistanis are one of the most compassionate nations in the world, it seems, for whenever anyone dies anywhere in the Muslim world, a group of Pakistanis will gather to pray for the departed soul.

However, there is a special requirement to qualify to be prayed for in Pakistan: you must have killed and tortured thousands and be recognised as a tyrant the world over. A case in point is that of al Qaeda chief Osama bin Laden, for whom not only funerals in absentia were organised, University of Punjab students even held a competition to pay tribute to ‘Sheikh Osama’.

Admittedly the man died in Pakistan, but he was a Saudi-born terrorist who caused intense suffering and loss of human lives in many countries, including Pakistan. Ironically, Pakistanis still insisted on praying for the salvation of his soul. What is more upsetting is that even Saudi Arabia had disowned him — his nationality was revoked in 1994 — but we Pakistanis, who had absolutely no connection with the man for a good part of our existence, decided to only harbour him and have hundreds of Pakistanis killed like sacrificial lambs, we also decided to ‘honour’ his memory and pray for the ‘departed soul’. And now comes the funeral of Libyan dictator and tyrant-in-chief Muammar Qaddafi — the man hated so vehemently by his own people that when an overzealous freedom fighter saw him captured, he couldn’t control himself and shot him dead. Although Pakistan enjoyed a great bilateral relationship with Qaddafi-ruled Libya, particularly in the 1970s, this is certainly no reason why Pakistanis should be organising his funeral in absentia.

But the most intelligent and honourable amongst us, those whose sense of justice the common citizen is supposed to put his/her faith in, obviously disagree. On October 25, a group of lawyers gathered at the GPO Chowk outside the Lahore High Court to say funeral prayers for Qaddafi.

I ask these assiduous, pious Pakistanis: what stops you from organising funerals in absentia for your own brethren when they are killed in bomb blasts, drone strikes, sectarian violence and target killings? Although innocent and hence worthy of much more respect than the souls of these tyrants they pray for, are these Pakistanis any less deserving of salvation?