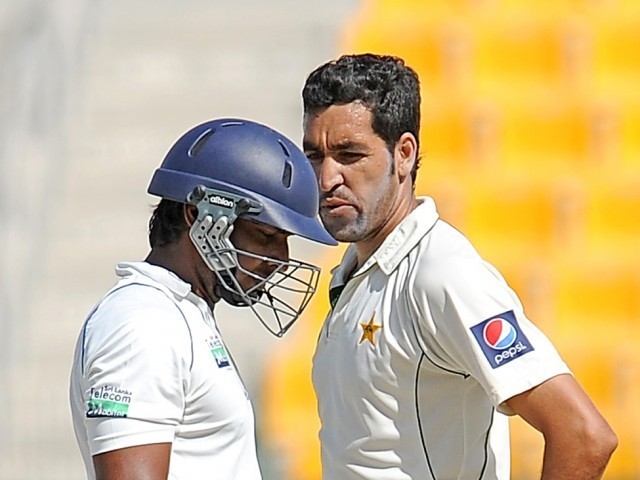 Pakistan happily played for a draw as it is bitterly insecure due to the controversy after controversy the team has suffered in the recent past.

Test cricket has been losing its edge in the day and age of T20 slam bang cricket. Who would you want to watch David Warner or Chris Gayle bludgeoning sixes or Asad Shafiq playing as though he were playing  a timeless test match? It is fairly natural for all of us to look for some excitement in test matches.

Pakistan had a golden opportunity to bring back the flare that it is famous for – unfortunately, Misbah and his men decided to play for a draw on a pitch that provided very little chance of allowing ten wickets to fall in 21 overs.

Forget the dropped catches and the poor fielding.

Forget the absolutely pathetic standard of umpiring throughout the test match.

Even forget the ultra-slow scoring rate of our batsmen in the first innings.

The fact is that 170 runs in 21 overs were achievable on this track.

Why would a captain happily play for a draw? I believe it is because of the insecurity that team Pakistan finds itself in. Controversy after controversy has left no semblance of stability in Pakistan cricket. This, consequently, manages to play down the inherent Pakistani flare which makes us trade victories for draws. Last year, in Dubai, Pakistan played for a draw against South Africa. Chasing 451 runs from roughly 130 overs, Pakistan batted for 117 overs, lost 3 wickets and scored 343 runs at a scoring rate of just under3 runs an over. If we look at successful run chases, the ones against England and Australia last year, they too were marred by some nervousness and a degree of uncertainty.

Who will bring back the fearless Pakistani playing methods? Is it the captain or the coach? While it is fair to say that you need a captain who is calm, there is a subtle difference between being calm and defensive. For example Steve Waugh was a very calm captain, but he wasn’t a defensive captain at all. Misbah has done admirably well with the bat as captain, behind only the great Don Bradman in terms of batting averages of captains. But Misbah needs to realize that Pakistan cricket needs a positive impetus. Pakistani fans have had enough of defensive cricket. We want some aggression on the field.

If we look at the real causes of this psychological defeat against Sri Lanka, our fielding and the slow scoring rate in the first innings hurt us badly. Asad Shafiq defied all batting sense by nudging himself to a 94-ball 26 at a time when a quick fire 30 would have served Pakistan’s purpose. His innings was criminal injustice to the hard work of someone like Junaid Khan. In the 175 overs that Pakistan batted, a lead of 400 or above could have been racked up easily. Surprisingly, Misbah played exactly the way he should have played at Mohali (another case of defying logic), while the others forgot to read the match situation.

When fielders like Mohammad Hafeez and Wahab Riaz start dropping easy chances, things get tough. For someone like Junaid Khan, who put his heart and soul into his bowling, this must have been painful. For fans, it was nothing short of torture. How can Pakistan manage to miss chance after chance? Speaks volumes about the bowling talent, doesn’t it?

The only way we can become a good test match side is by playing for victories. Sadly, it looks like draws are equal to victories for this team. And draws aren’t exactly the best advertisement for cricket.