Hillary Clinton: She came, she saw, she befuddled 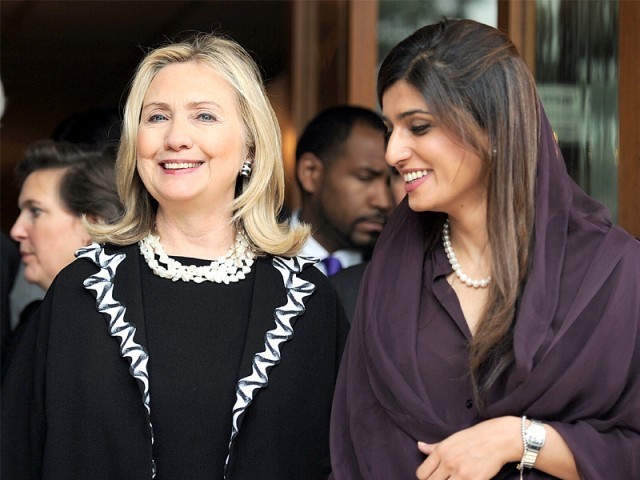 ‘MOTHER-IN-LAW’ IN TOWN: Hillary Clinton with Hina Rabbani Khar ahead of their joint press conference in Islamabad. PHOTO: AFP

US Secretary of State Hillary Clinton’s visit to Pakistan has left the civilian and military leadership here more perplexed than ever. As one foreign office official put it:

“If you think we have differences between the government and the army, it is nothing compared to the Americans.”

During her talks, both public and private, Clinton stressed on peace, going so far as to tell a questioner at her town hall-style question and answer session that the US would be looking to Pakistan to help with peace talks rather than military operations.

This emphasis on negotiations was also the main thrust of Clinton’s talks with government officials, although she also insisted that Pakistan take some kind of action in North Waziristan.

Clinton’s padres in peace, however, took a more hard line. The Chairman of the Joint Chiefs of Staff Martin Dempsey and CIA Director David Petraeus insisted, in their talks with the military, that the ISI break off ties with the Haqqani network and take the first steps towards dismantling them. The generals’ message was in stark contrast to that of Clinton, and included threats that the US will present evidence of Pakistan’s collusion with the Haqqani network.

This good-cop/bad-cop routine has left Pakistan befuddled. The foreign office official said that there is no way Pakistan can send its troops into North Waziristan, that too with winters approaching, while at the same time negotiate with the Taliban behind the scenes to make sure the US isn’t humiliated as it prepares to leave Afghanistan. The official theorised that the US wants to show the public back home that it is still committed to the fight against the Taliban, while pursuing a strategy of negotiations that will give them the best chance to withdraw from the region.

Prime Minister Yousaf Raza Gilani made an even worse impression on the US than Clinton did on Pakistan. A US embassy official said that the main point Gilani stressed during his talks with Clinton was that the All-Parties Conference resolution had called for peace talks with militants and so this reflected the will of the people.

Needless to say, Gilani’s approach did not impress the US. The embassy source used this as an example to explain why the US prefers dealing with the army, while talks with the civilian government are mere window-dressing. He said:

“When the army lies to us, we know why they’re lying. When the government lies to us we just don’t understand why they’re doing it.”

Clinton’s visit had also stirred much anticipation among the group of people who consider themselves the true power-brokers in Islamabad: the press corps. They soon found out that they are at the bottom of the food chain in the capital.

Clinton’s press briefing, which was handled by the Ministry of Foreign Affairs, seemed arranged to keep as many journalists out as possible. Those invited were told to make sure they were there by 10:45 am. What they were not told was that, like at an ultra-exclusive party, the gates would close 45 minutes before the scheduled time, after which no one would be allowed in.

Much consternation was caused by the invite list to the town hall meeting, with indignant development consultants, many of whom have advised the Americans and sucked off the USAID teat, feeling that an invitation should have been part of their reward.