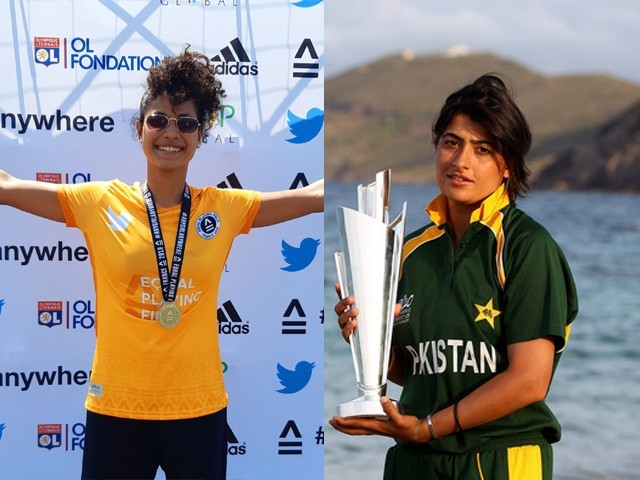 Those who are brave enough like Hajra and Sana to choose a career in sports, are met with hurdles at every point.

The FIFA Women’s Football World Cup has  come and gone, with the United States proving to be worthy (and badass) winners. This was their fourth World Cup win. We saw some teams on the grand stage for the first time and most of all, the viewership for the tournament was pretty fantastic, proving that people are actually interested in women’s football.

But the tournament was also marred by a tumultuous year for women’s football with players fighting for equality. We had our own women’s football captain Hajra Khan play a record-breaking match in France to shed light on the inequality in sports.

The Equal Playing Field’s (EPF)  initiative aims to include girls from all over the world to celebrate football and provide opportunities. However, for Hajra and other Pakistani female footballers who have been affected by the inequality in sports in Pakistan, playing in the record-breaking match was a lot more personal.

Hajra, who has been a part of the Pakistan women’s football team since 2009 and captain since 2014, wanted to play sports since she was very young. When she was 14, she made her football debut with football club ‘Diya’. She went on to join Balochistan United and won her first National Women Championship title with them in 2014. Hajra, who has also played and trained with international clubs, is quite vocal when it comes to talking about the issues female athletes face in the country.

In Pakistan, opportunities in sports other than cricket are low, and if you’re a woman, the chances are even lesser. Take the football team, for example. The Pakistan Football Federation (PFF) is broiled in controversy and it is the women’s team that is hit worst by the politics. The last international event the team played was in 2014 and there seems to be no accountability of the game even by International Federation of Association Football (FIFA).

Hajra was the first Pakistani footballer (amongst men and women) to get signed by a foreign club, she played in a record-setting match for the second year in a row, and yet such talented footballers still get less media coverage, so it’s not surprising that while Hajra and her team fight barriers every day to simply have a chance to play football, it flies under the radar.

In cricket too, while the men’s team prospers, the women’s team has to endure many hurdles to get through, despite performing better than their male counterparts in recent times. Sana Mir is currently ranked first in the ODI Women Bowlers in the International Cricket Council (ICC) player rankings.

When the men play in world cups, they’re the talk of the town. When the women do the same, it’s difficult to even find channels that broadcast their matches. And not only that but women have to fight social barriers to even get ahead. Harassment of women in sports is rampant, and since sporting bureaucracy consists mainly of men, it is hardly ever reported.

In 2013, female cricketers in Pakistan levelled sexual harassment allegations against the Multan Cricket Club chairman and selector, stating that men agreed to put them in the teams for sexual favours.

As a patriarchal society, Pakistan also places its ‘honour’ on its women and more often than not, women playing sports is thought to be ‘vulgar’ and ‘un-islamic’. A recent ad campaign featuring cricket team captain Bismah Maroof called on women to break free of conservative norms. When a simple ad campaign has the potential to spark outrage in Pakistan, it’s not surprising that female athletes are unable to get ahead in the sport.

All of these issues also lead to lack of funding and development of women’s sports. Pakistan as a nation is obsessed with cricket, due to which athletes of other sports, both male and female, suffer.

Recently, we have seen focus shift towards women with kickboxing school for girls and football foundations being set up in Lyari that takes into account the fact that women play the sport too.

However, on a national level, the problem still persists, and we have examples right in front of us. Halima Rafiq, one of the cricketers who accused the Multan Cricket Club chairman of sexual harassment, ended up committing suicide after she was sued for defamation.

Our women’s football team hasn’t played in years since the football federation keeps scrapping women’s tournaments. Unlike the rest of the world that continues to move forward when it comes to investing in sports, we seem to be moving backward, making it more difficult for talented female athletes to even consider this as a career path. And those who are brave enough like Hajra and Sana to choose this path, are met with hurdles at every point.

If the government will not fund women’s sports teams and allow them to play and develop, Pakistan will continue to fail its women. And talent that can and should be harnessed and showcased on the international stage will only be seen on the streets of Pakistan.