Qaddafi: From hero to devil 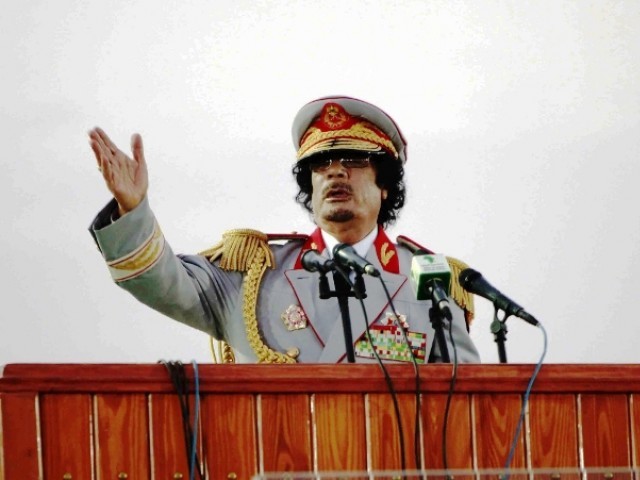 The 27 year old who abolished monarchy in Libya saw a brutal death at the hands of the very people who once loved him. PHOTO: REUTERS

The late Moamer Qaddafi was regarded a hero in Libya till the uprising started against his regime in February this year. People respected him as one of their spiritual and even revolutionary leaders. Nobody in Libya thought even in their wildest dreams that one day Qaddafi would not only be removed from power, but also killed ruthlessly and that too at the hands of Libyans themselves.

Early on Thursday, Qaddafi was killed when new regime forces launched a final assault on his home town Sirte. The former dictator was wounded as he tried to flee the scene, with injuries to his head and legs. Video footage showed his bloodied body being dragged by freedom fighters and loaded in to the back of a pick-up truck. Such humiliation and disrespect saw the end of the life of the once-loved dictator.

Qaddafi was regaled as national hero of Libya when in 1969 he led a bloodless coup against the monarch and deposed him. He was then just 27-years-old and a junior officer in the Libyan army. Through different welfare steps and development projects, he succeeded to win the confidence of his people and continued to rule them with complete impunity. Nobody ever dared to speak or stand against him even when he was utterly wrong in his decisions.

The economy of the country thrived under his rule and  people were provided with all the basic needs. However, then came the dark side where they were deprived of their basic rights; Libyans were not allowed to enter politics, make unions and speak against Qaddafi. There was no parliament, no civil society and no non-governmental organizations in the country, let alone freedom of speech. These flaws ultimately led the people to rise against the absolute ruler, Qaddafi, and they finally succeeded on Thursday with his death.

Qaddafi ruled Libya for around 42 years and saw many ups and downs. He remained at loggerheads with different developed countries over many issues including the United States, especially in 1970s. During the 70s, Qaddafi enjoyed very close relations with Zulfiqar Ali Bhutto the then prime minister of Pakistan, and they both wanted to build an Islamic bloc against the West and America. The then Saudi monarch Shah Faisal also supported them with the idea and wanted to make an Islamic Bank for the welfare of the people of their countries.

The fuel supply to the United States and some other western countries was also halted for a few days to show them the power of the Islamic bloc. The consequences of this move were severe as Zulfiqar Ali Bhutto was hanged in Pakistan in 1979 and Shah Faisal was killed by his own nephew. So the west took its revenge, but surprisingly, Qaddafi survived for a long time. However, he did not prove to be invincible and suffered the same fate after 30 years.

After the uprising against his rule, Qaddafi said in one of his speeches:

“I live in the hearts of millions.”

He said some foreign hands were conspiring against his rule and wanted to colonise his country but:

“the people of Libya, the true Libyans, will never accept invasion and colonisation.”

It was perhaps wishful thinking, on his part, if he believed that people would finally support him and he would continue to be the absolute ruler of Libya. For his most ardent of supporters, the hero  Qaddafi had turned in to the devil Qaddafi and people were thirsty for his blood. With the support of NATO, the dissidents continued fighting forces loyal to the dictator and soon succeeded to lay their hands on Tripoli – the capital of Libya. For weeks, the rebels fought with his supporters to gain control of Sirte – the stronghold native city of Qaddafi.

The devil is no more in the country. The Libyans were also shown footage of the armed men dragging Qaddafi out of his hiding place, battered and bleeding. If we look at history, it transpires that dictators and tyrants usually meet the same fate, but who on earth ever learns from history?

The real test for Libyans and the National Transitional Council starts now. They must succeed in establishing democracy, rule of law, and other state institutions in their country for which they have sacrificed their lives. Their struggle has not ended yet, this is just the beginning. Thus, they have to carefully devise their future course of action, lest they are betrayed, like the people of Tunisia and Egypt, in the name of revolution.

A freelance journalist based in Islamabad who is doing M.Phil in peace and conflict studies from National Defence University.

PTI & PML-N: Saviours of justice or a national joke?