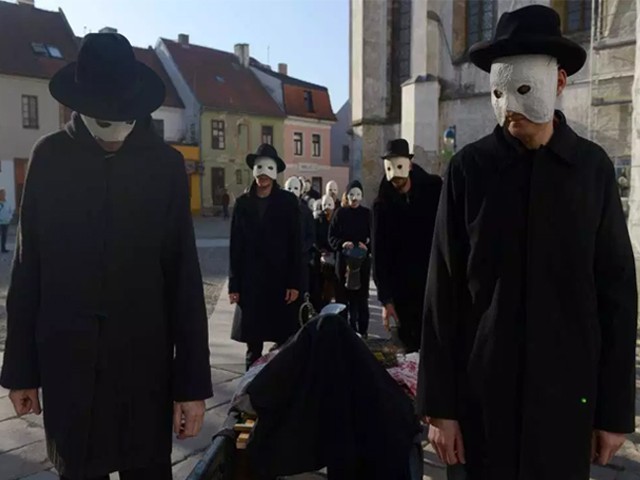 Each face with a bright mask of pity stitched perfectly on them. PHOTO: GETTY

“I’m wearing a three-piece suit. You?”

“I haven’t decided yet. Who died?”

He says ‘its‘ name. They smile.

“Oh, finally. A lot of people will appear there, will wear my sherwani.”

“Just hurry up, not good to be late to funerals; attention gets diverted to the deceased.”

When they reach the place, they see the most beautiful of faces. Each face with a bright mask of pity stitched perfectly on them.

The two walk together, fantasising the faces and being fantasised, until they approach the host. After a series of words stuffed with a big scoop of sorrow, they ask,

The person looks at them and his mask begins to dissolve. The face that appears sends an extremely cold shiver; for the first one, the shiver is lost inside his three pieces of suit, while for the second, it goes until the length of his sherwani before coming back up.

“Do you really want to know?” the stranger asks, and they are immediately sorry they inquired.

“Now you cannot move until I finish my answer,” he says, and the two look down to see slabs of cement where their feet have just been.

All this time, his mask has almost disappeared, and it seems like a very, very familiar face.

“I am the deceased,” he says, with a bright smile, “and I have been killed by both of you.”

The two look with interest, and it continues,

“Once I was an emotion,” they cringe at the word. “You cannot understand, let me make it clearer.

I was an infinite well inside all hearts; people did not know me so much by my name but more by my importance and because of my depth. Each person used to get a clean bucket and bail out water from inside me to throw into another well inside another heart. A day or two later, I was re-filled again from another’s well.

There were some people who used huge buckets and bailed me out consistently and I loved them more because I was so happy to be moved because you see each time I travelled to another heart, the water there was of such a different colour and taste that I thought I would go stale if I did not go.”

The two listen closely. It is a story they have not heard before, but one they have been a part of.

“Then, two things/people began to enter hearts here and there and there and here. They did not come empty-handed. They brought new buckets, and shiny signboards of my name. In the beginning, they offered everything for free, but once hearts began to sway to their tune, they spoke about something new, something called a ‘price’. They began to offer this ‘price’ for every bucket of me.”

The two look at each other, their bodies full of sweat.

“As I began to be traded, my signboards became bigger, and I began to be stocked together in one place. I found my reflections from different wells but their taste now was such a sour taste of fear that I kept to myself. I grew stale and I grew in amount. My name was the talk of the world. But as it usually happens, my importance had been lost in the noise. No one knew that I was polluted now, that I had lost my colour and my purpose. That I shirked from my own self. But you knew that, didn’t you?”

The two nod reluctantly. And ‘it’ smiled.

“But there are hearts you still don’t know about! Where I am still as I used to be, fresh and constantly transferred!”

The two edge closer. This was news.

“I cannot tell you the names. But I can describe the hearts. In these hearts, I am of colours of the most beautiful hues; I am of an unparalleled taste. People draw me out for every action they do. For every thought they think. People draw me out in dreams and make various structures with me. I am their life-support, and they are mine. These hearts are far away from ‘prices’ and masks. These hearts are vulnerable, they are broken, and they are covered with stitches. And I absolutely adore them.”

The two feel weak. The second one cannot feel his knees behind his sherwani.

“So, please, feel free to celebrate my funeral because I am kindness, and I cannot die.”