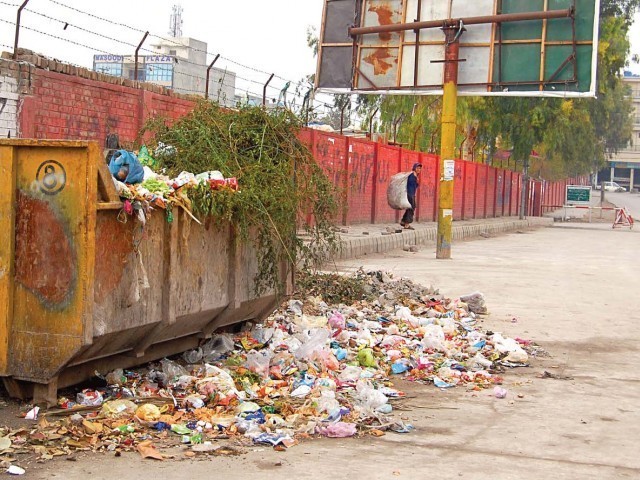 The sheer mess we see on our roads and all around us today bespeaks the dangerous silence of the religious battalions on matters related to environment.

I am always inspired by trash. When I see it on the roads, in parks, in hospitals and outside homes it sends me in a state of a deep reverie. A couple of years back, I was shaken to the core to do ‘something for my country.’

Looking for the answer of what could be done, I came across a newspaper article about some ‘crazy’ youngsters who, tired of the oblivion of their fellows and authorities towards matters of environmental consciousness, took it upon themselves to do something. They girdled up their loins with the motto that the least you can do for your country is to pick up a shovel and start cleaning it.

I joined the group and felt a great deal of satisfaction when we broomed and shovelled huge heaps of garbage and put our hands in the gutters at some of the most posh and prominent marketplaces of Lahore. Since then, I have infinitely thought about ‘why.’

Why is it that the authorities and the masses don’t bother to give a damn to this issue?

Why is it that citizenship is not taught in our national curriculum for schools and colleges?

Why is it not a compulsory subject like Islamiat and Pakistan Studies?

Why is it that a country known for its religious ideology and called the ‘Islamic’ Republic of Pakistan so dilapidated in terms of its natural environment?

Like almost every other issue around us, this too is reflective of our hypocrisy, disparities and dichotomies. Yes, you have the right to demand the inclusion of chapters related to jihad and qitaal in your Islamic educational curriculum but why is it that the religious elite never demanded education about responsible citizenship to be included in the syllabuses of the madrassahs, schools and colleges. Is this not a part of Islam?

The sheer mess we see on our roads and all around us today speaks of the dangerous silence of the religious battalions on matters related to environment. While you will very often hear voices of rigidity, oppression, chauvinism, misdirected and misunderstood religious rulings and hatred, never would you hear someone on the pulpit coaxing listeners to be responsible citizens of the state and linking this matter to Islam. They probably think it is too shallow, too insignificant a thing to even mention and hence the ever deteriorating systems of traffic, health and hygiene and the ever increasing filth in our cities.

The Islam that we see around us in our country today is a very limited and narrow version of Islam. The communal aspects and teachings are often ignored and hence we see that children and adults, religious and non-religious alike would never mind littering the roads. When you try training them and preventing them to do so, you would more than often hear such remarks as:

“So what? Isn’t everybody around littering? When there are heaps of garbage around, would it really matter if I throw my wrapper on it too? or Oh come on, there are far more serious things going on in the country to think about these trifles.”

What we, as citizens of Pakistan and of the earth, forget is that these little behavioural aspects make up the collective mindset and behaviour of the nation. If we are too shy to own and clean the few feet of land in front of our houses, workplaces and shops, how on earth can we expect ourselves to make bigger sacrifices for the land we live upon?

Allah loves those who are most beneficial to their surroundings. Religious teachers should recognize at this critical point in time, the dire need to develop ecological consciousness amongst the Muslims. We need to realize that until and unless we have a healthy relationship with our environment, we can not have interconnectedness with the Divine.

Rights of the environment

It is astounding to note that some 500 verses in the Quran deal directly with nature, environment and natural phenomena. Numerous chapters of the Quran are named after different aspects of nature. The Quran and the Prophetic traditions make constant reference to fitrah or nature and we are instructed to live according to the best of our nature. Our Holy Book makes us aware that everything in the universe submits to a natural pattern and thus conscientizes us about the Creator of all creations. Islam instills in us a sense of respect for God’s creation thus making us cognizant of our inextricable link to nature.

Mizaan (balance and order) in nature

There is a strict degree of orderliness in all creation says the Quran in [27:88]. Everything is naturally made to the measure of excellence and we as the vicegerents of God on earth, are obligated not to disturb this balance. [55:7]

The signs of God and nature

What we generally and mistakenly understand the word ayaat is that they are verses of the Book. The word, however, means signs. So, the nature we see all around also has many ayaat or signs just like the verses of the Book. Time and again, the Quran instructs us to reflect on the signs of our Lord, in order to make us more conscious of our surroundings. A true believer should, therefore, ponder upon both types of signs in order to live in harmony with nature.

Ard (earth), imaar (our earthly domicile) and our immediate habitat

The word ard or Earth has been used 453 times in the Quran. It is amazing to note that in Islam there is a concept of hima (environmental protection) and of haraam (unviolable zones) for the protection of wildlife, water and other natural resources. While we teach our children other aspects of the glorious life of the Prophet Muhammad (Pbuh), we also need to emphasize upon his relationship with nature. It is reported that he forbade his army to uproot trees and pollute the water bodies even in times of war.

Islam guides us that we are not the only community on earth. There are innumerable others like ants etc. So we need to have a harmonious relationship with them in order to maintain the divine balance on earth.

Maa (the liquids of life)

We are told in Islam that everything is created from a liquid i.e. water which is a reviver of life. There are numerous verses in the Quran referring to rivers, sees, wells and rain. Even the image of paradise that we are given has rivers ‘flowing beneath it’. Thereby, there is a strong underlying message of preservation of water bodies which is directly linked to the survival of humans and all other ecological communities.

Conservation of our environment is the ethical part of our responsibility considering that we are the vicegerent of God on earth. There is a strong organic connection between proper knowledge and right behaviour. So, religious institutes and personalities should invite among the masses a balanced stewardhip and strongly discourage extremist behaviors with nature.

Nature-a trust and our accountability

The created things of nature are made subservient to us, the humans for our benefit and not for their abuse. They are not for our sole use and hence we should not cause corruption of order. We should not be wasteful in the use of natural resources. There is a very thought-provoking American saying:

“We do not inherit the earth from our parents; we borrow it from our children.”

So, whether it be a patch of land or a river or anything else in our neighbourhood, it comes in our stewardship religiously and ethically and thus it is incumbent upon us to protect and not pollute and corrupt it. We would start caring for the world we live in.

A literature graduate from the Kinnaird College for women. She is also a freelancer, poet and social activist.

Gender apartheid in the Muslim world

How a Land Cruiser can change your life