Anna Hazare, you are not welcome in Pakistan 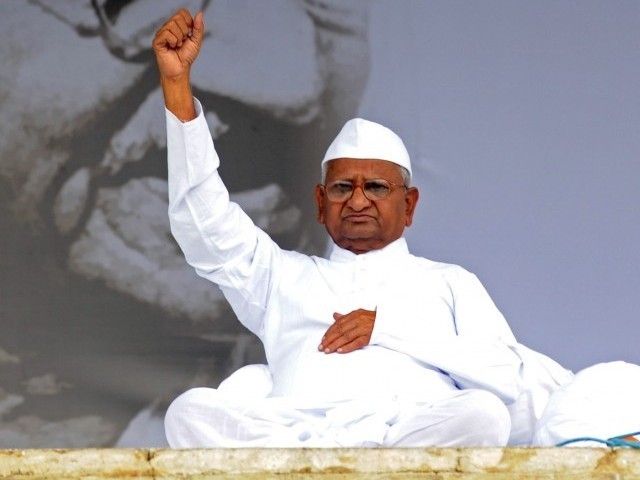 "Today once again if I have to, am ready to take part in war against Pakistan" declared Hazare in his blog. PHOTO: AFP

Not long ago, international media saw the rise of a new star; a man who vowed to reincarnate the principles of Gandhi, who is respected universally for his passion for peace and non-violent political activism.

Well, we too were happy to see, despite the mudslinging that Ziaul Haq and his prodigal children did towards Gandhi, a man who would strive for peace. We hoped his anti-graft movement would come to Pakistan as well. Moreover, we prayed that the Pak-India border would be adorned with flowers and candles rather than barbed wires.

However, today all of my hopes suddenly evaporated when I read Anna Hazare’s blog. He wrote:

My Dear Sisters and Brothers,
Namaskar!

Some people talk incoherent things about Kashmir related issues but they are unaware of the fact that when I was in the army I had taken active part in India-Pakistan war as a soldier. All my colleagues attained martyrdom on the border during the war with Pakistan. But I miraculously survived.

It was then I pledged the rest of my life in the service of my country.

Even today you can see the marks on my forehead left behind by Pakistan’s bullet. This is my active conviction that Kashmir is an integral part of India and will remain so. Today once again if I have to,  am ready to take part in war against Pakistan. But some people can only speak and don’t do anything on ground (in reality for Kashmir) and this is unfortunate.

He has explicitly stated that he will take part in the war against Pakistan if required. I don’t understand  how people can name him as a second Gandhi when Hazare talks about war, something Gandhi was fiercely opposed to. I have heard that Gandhi went on to a fast-till-death mission on the issue of the distribution of resources to Pakistan and one shouldn’t forget that this was in favour of Pakistan not against it. The telecom scam that rocked India and many powerful politicians was just a catalyst that made a common man a hero and gave him the fame that he never deserved.

I am not discrediting the good work that Hazare has done for India, mind you. All I am saying is that it was just the mega scam that attracted eye of the frenzied Indian media and the timing of Hazare’s protest. I am certain that Hazare was not talking about a peaceful war with Pakistan. War is war and loss of human life is terrible. Hazare’s cold-bloodedness became evident when many of us read that he wants to go to war with Pakistan if he deems it necessary. Of course, did not say what we all expected him to say i.e. he will not let it happen, and that he would strive to make things better so that these two countries never go to war again. Instead, he came up with the idea about his conviction that Kashmir is a vital part of India.

The major issue that haunts the relationships between these two countries is Kashmir. Kashmir is Pakistan’s lifeline. All our major rivers, with exception of the Kabul river, flow downstream from Kashmir. Thus Hazare’s diatribe and his active conviction that Kashmir is a vital part of India is just laughable to me and to my fellow Pakistanis. The Kashmir issue that we dub as a flash point should be resolved in a way that both countries benefit from the solution along with the people of Kashmir.

Most Pakistanis view Kashmir as a core issue between India and Pakistan. It is the thorn in our side. Thus, I don’t think Anna Hazare will be welcomed in Pakistan after his arrogant declarations. One shouldn’t forget that Anna Hazare might take part in politics. Far Right Hindutva parties of India want to sell ‘Pakistan wants us to die again’. Anna Hazare has said the same but in more polite words.

Hazare has stated that he has not forgotten the bullet fired by a Pakistani soldier, that he can still feel its mark, and can see the soldier who died with him. But why didn’t Anna Hazare state that he too was taking part in war? His colleague was also fighting and might have shot dead many Pakistani soldiers. What sort of non-violence is this where you keep a grudge of the bullet that a Pakistani soldier fired at you so many years ago? Is it non-violence and Gandhi-giri that you call the lifeline of Pakistan and the source of Pakistani water yours and shut all the doors of any other perception on it?

When I heard that Anna Hazare was coming to Pakistan, I was happy. I believed that if this second Gandhi lives then our two countries would finally be on good terms, because, like Gandhi, Hazare would show the courage to call a spade a spade. However, his blog threw cold water on my all hopes. To me Anna Hazare is no hero and Gandhi would have been ashamed of him. He might be a hero to the local Indian media, but to me he is just another rightist who is using Gandhi to achieve some sort of unearned status.

It is partly our fault too. I have seen that a trader of Super Market, Islamabad went on a hunger strike against corruption. He started his fast right after Ramazan, but we were so busy with Hazare and Bollywood, so we totally ignored our local hero who was fasting not to get the media’s attention but for the real thing. I don’t know why we ignored him. I don’t even know what happened to him and his fast. Leave all that alone, I even forgot his name, but all I know is that to me he is far better than Anna Hazare.

I want to support my local heroes not those across the border who deem Pakistan as an enemy and keep unnecessary grudges against my country.

I love you Pakistan. Pakistan zindabad.

A telecom engineer from Islamabad who writes on social issues