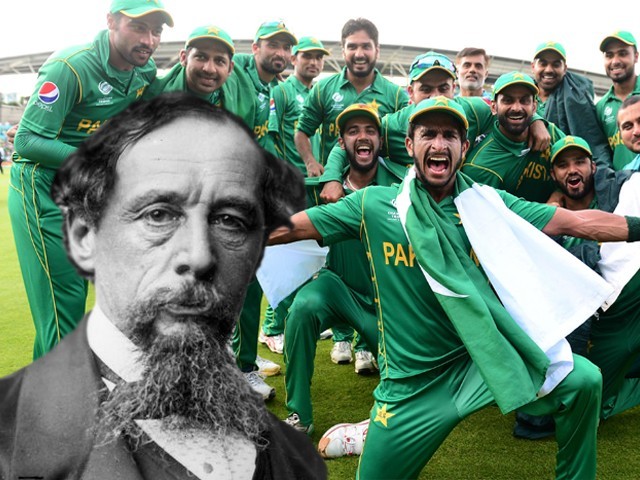 So frequently has one Pakistan left for the ‘other’ Pakistan and then come back again.

The famous opening of Charles Dickens’ A Tale of Two Cities speaks of an era of contrasts and contradictions. In the year 1775, England and France paradoxically embodied the mirror images of good and bad that define our everyday lives and everything within them. The words invoke a perpetual struggle, between hope and despair, darkness and light, everything and nothing. As I stumbled across the passage again last week, I was struck by an alarming realisation that nowhere else was this theme of duality embodied more clearly than within the Pakistan cricket team and its 2019 World Cup campaign.

Call it the theatrics of a heartbroken fan to draw parallels between pre-revolution French society and the exploits of a sports team, but so often has the pendulum swung between the sublime and the ridiculous, so frequently has one Pakistan left for the ‘other’ Pakistan and then come back again; and so many an ode has been written in valorisation and fulmination of this ‘mercuriality,’ that the concept of duality fits rather aptly.

The best of times

Babar Azam’s cover drives: Sachin Tendulkar had the back-foot punch, Brian Lara had his famous high back-lift and Virat Kohli has his magic wrists. Azam has something they all had, but somehow, he has made it seem like he is the first one to do it. Shaheen Afridi’s spell against New Zealand: the hallowed sight of a green-shirted, 90mph, swashbuckling left-arm quickie running through the opposition’s middle order on a grey English morning – nothing else compares. Shaheen Afridi celebrates after taking the wicket of Ross Taylor.

Haris Sohail’s innings against South Africa: jumpstarting Pakistan’s winning streak was a breakneck 80 runs off 50 balls from a man who was originally overlooked for being a ‘Test match player’.

Wins against New Zealand and England: beating the world number one, tournament favourites, possessors of the deadliest batting attack in the history of the modern game, and that too on a flat track? A feat only Pakistan could pull off, bettered only by a near perfect performance against the Kiwis.

The worst of times

The opening match against West Indies: footballer Andrea Pirlo once wrote about a Champions league final defeat to Liverpool in Istanbul in 2005:

“There are always lessons to be found in the darkest moments. It’s a moral obligation to dig deep and find that little glimmer of hope or pearl of wisdom. You might hit upon an elegant phrase that stays with you and makes the journey that little bit less bitter. I’ve tried with Istanbul and haven’t managed to get beyond these words: for f*** sake.”

We know Pirlo, we know.

Mohammad Hafeez and Shoaib Malik being our senior batsmen: well, the less said, the better. Mohammad Hafeez of Pakistan walks after being dismissed against Bangladesh.

Mitchell Starc’s review against Wahab Riaz: If a single moment decided our fate in the World Cup, this was perhaps it.

Sarfraz Ahmed getting abused: this was the only thing that could have made things worse in wake of the India game.

The age of foolishness

Short-pitched bowling: constantly pitching it short against India and Australia was a tactic which bore no fruit. Just prior to the World Cup, Pakistan played a five-match bilateral series against England. Boy, did we make little use of it. Taking the first four matches to find their length cost Pakistan the Australia game and ergo, a place in the semi-finals.

Hafeez getting out against New Zealand: Hafeez sees part-timer. Hafeez tries to hit out. Hafeez gets out. Play on loop.

Sarfraz giving the tail the strike against Australia: the thing with net run rate is that everyone knew about it before the start of the tournament. Some teams adapted, while others, such as Pakistan, remained indifferent to the value of wasted or saved runs, wickets and overs.

Dropping Shadab Khan against Australia: that cost us at least 30 runs right there. Sarfraz Ahmed rues a near miss.

The epoch of belief

Ten days of hope: the days following England’s defeat to Sri Lanka until their win against India were some of the most memorable in professional sport. This period included an incredible sequence of fixtures that saw England lose to Sri Lanka and Australia, while Pakistan cleared past South Africa, the undefeated Kiwis and Afghanistan. Suddenly, the 1992 World Cup comparisons graduated from Twitter memes and WhatsApp groups to the live television broadcast. Truly, the (short-lived) epoch of belief.

The season of incredulity

Ten days of disbelief: paradoxically, the very same 10 days following England’s defeat to Sri Lanka until their win against India encapsulated a time of disbelief. Almost a dozen different games were required to go in Pakistan’s favour, half of which they weren’t involved in. To even win their own fixtures, with a team of overweight and underachieving athletes seemed like wishful thinking. The task truly defied belief. Haris Sohail of hits a shot for 6.

The season of light

Azam’s coming of age: this exorcised the demons of wasted potential that were Umar Akmal and Ahmed Shehzad. Azam isn’t just a batsman, he is a light at the end of a tunnel filled with a generation of batting mediocrity. He is our redemption.

The season of darkness

“There is a tide in the affairs of men. Which, taken at the flood, leads on to fortune.”

In the 10 days preceding the England-India fixture, the tide had risen to a crescendo and the flood had arrived. England’s victory broke the tide and tamed the flood, virtually spelling an end to Pakistan’s semi-final hopes. Man of the match Imad Wasim takes a selfie.

We had everything before us

But after the Afghanistan-Pakistan encounter, one could almost touch the semi-finals. The charge appeared unstoppable. Preparations for an India-Pakistan showdown at Old Trafford were already underway.

We had nothing before us

Yet, at the same time, we were hopelessly doomed, relying on the tournament’s strongest outfit to lose three or four matches on the trot. But England triumphed, and their ascension ended Pakistan’s positively Dickensian tale. Or perhaps it only reaffirmed it.