Zionist mosquitoes and infidel viruses amongst us 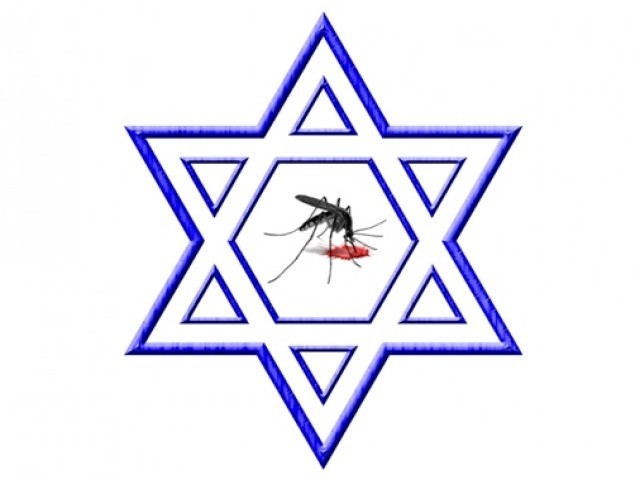 The mosquitoes that are causing dengue have been deliberately engineered with the nefarious virus by the Zionists.

I am assuming most of you have already realized what is causing the massive outbreak of dengue fever in Pakistan. According to a number of confirmed resources, the mosquitoes that are causing dengue have been deliberately engineered with the nefarious virus. After they were infected with the virus, they were inducted into Pakistani airspace where they wrecked havoc. And who, of all, could have inflicted such damage upon us? Of course the Zionists!

They have long been jealous of our economic and social progress, not to mention the political stability, the unparalleled research centers and one of the highest literacy rates around the world. When they couldn’t disrupt us through riots and by bribing people to become Taliban (yes, they were the ones who did this) they have finally decided to unleash a biological weapon.

If you doubt this, that indicates weakness of faith. We have substantial evidence that such weapons have been used by Zionists even in the past. Remember the floods? Last year, when Pakistan was about to make a leap in economic progress (or was it social or political? Can’t remember, never mind), floods hit Pakistan! I mean, isn’t it obvious? The timing of the tide and the fact that it killed so many of our Muslim brothers and took away their lands and property – it has Zionists hands all over it!

Besides, they have the HAARP technology that can turn day into night and vice versa. And cloudy weathers into dangerous storms. And vice versa. And twilight into dawn and evening into night (um…maybe the last part happens on its own). Some researchers also argue that the deceptive behavior of the moon on the eve of Eid (like this year Saudi Arabia saw a moon that was not even there. But how can they make a mistake?) may also be a manipulation of the HAARP technology, meant obviously at deepening the fissures in the exemplary unity of Muslim Ummah.

Although a notable singer (read scholar…ok don’t), had a minor disagreement with others when he said that the flood was actually an azaab from God and not a Zionist conspiracy, it had me a little mixed up – so what was it. A sign from God or a Zionist conspiracy – or worse still, both, which meant that God was siding with the Zionists this time. Fiery words were exchanged between proponents of each side. Anti-Zionists finally discovered that the scholar was a RAW-agent-in-disguise and said that he should be stoned to death; whereas the scholar passed the verdict that these anti-Zionists were committing blasphemy by pinning God’s deeds on Zionists and thus should be killed publicly by anyone willing (he also mentioned that the one to do so will immediately get a one-way ticket to heaven.)

The conspiracies of our enemies don’t end here. A friend recently revealed that the Arab Spring, the bulk of anti-government movements that have surfaced around the Arab world, is actually according to Zionist agendas. It is meant to pave the way for Greater Israel. In fact, Gaddafi had been forced by the Zionists to leave his throne and the people we saw on the streets in videos and on TV have been created by a highly sophisticated video-editing technology. Doubts have been raised as to whether it’s the same technology that was used in the famous ‘fake’ video against a very pious televangelist or an advanced version of it.

Coming back to the matter at hand, the dengue virus has gone out of control. A constant reinforcement of infidel mosquitoes from across the border has rendered it virtually impossible for the government to contain it. The gear these mosquitoes are wearing has been specially imported from Israel which makes them more resistant to the local climate and therefore, more lethal. The scholars who first discovered that there were foreign agencies involved in the epidemic have prescribed a special anti-RAW, anti-dengue vird to be recited ten times every morning. This will create an invisible shield between you and the would-be attacker and thus, keep you safe from the virus.

Efforts are under-way to locate the HAARP system that is relaying directions to the dengue squad. But they may as well be futile, states an ex-intelligence officer, General Bull who says that Zionists had a very advanced technology as far back as the soviet days. The technology enables them to hide facilities, buildings, sometimes entire cities so that no one can see them and no radar can detect them.

“We were able to defeat them only when we chanted slogans and the reverberations of our voices disrupted their security mechanism” he said, with a truly patriotic gleam in his eyes.

“But…wasn’t it the Russians you were fighting in Afghanistan, Sir?” a little confused, I ask him.

“Come on! Don’t you know that Russians were puppets in the hands of Zionists” he shakes his head from side to side and gives me a disappointed look.

Meanwhile, a reverent federal minister, who has a particular fondness for Google Apps, has also voiced his concern at the mosquitoes that are at loose. He told media that he was closely inspecting the activities of these mosquitoes through Google Maps and that he was well aware of the real culprits.

“We will have them by the necks” zooming in on Lahore’s satellite images, he concluded, “I can see where their hide-outs are and soon a detailed operation will be launched to curb them.”

SZH, a notable expert on mosquito strategies and their role in national security, posted on his facebook page stating that his sources at Washington confirm the existence of a lab at a location in a country somewhere in the West where the virus was actually engineered. After his previous vows that one day the green flag will wave atop Red Fort in Delhi (which had to face a temporary postponement), he now vowed that he will send pious mosquitoes to attack these enemies of Islam and eliminate this imminent threat to Pakistan’s stability.

“Pakistan will be victorious against this attack. Pakistan is meant to be victorious. No one can harm us, no matter what. Except, perhaps, the liberals who are actually Zionists, unknowingly” he adds, with a meaningful wink.

The worst thing in this entire episode is the non-Islamic attitude of the common masses. Rather than exposing the Zionists, many doctors have said that dengue is an epidemic that can be dates back to centuries and is able to thrive due to unhygienic environmental conditions. They are also prescribing western medicine for its cure which is very un-Islamic and ought to be condemned.

Finally, we must understand that the entire world, with the exception of Islamic countries, has joined its hands in conspiring against our mighty nation. Our atomic bomb is the greatest threat to them and they may send stinger bees in the future to neutralize it. Therefore, we must stand united in this time of great ordeal and be fully cognizant of the truth. Only then can we hope to deliver Pakistan from this crisis and continue our rapid ‘rise’ in the comity of nation.