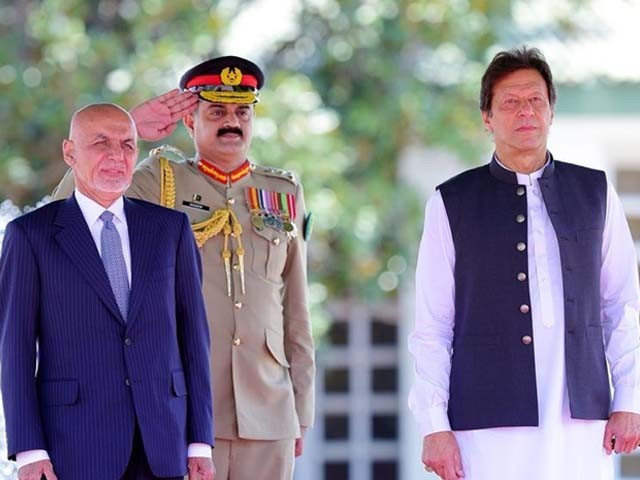 Pakistan needs to diplomatically co-opt elements within Afghanistan that have been and continue to be victimised. PHOTO: TWITTER/ PRIME MINISTER"S OFFICE, PAKISTAN

It may seem counter-intuitive to claim that a perennially failed state with illogical borders, an ethno-demographic ticking time bomb for a population, and a traditionally ungovernable periphery is the primary enemy of a nuclear-armed and exponentially militarily superior neighbouring state. But in the case of the failed state of Afghanistan’s relationship with nuclear Pakistan, this is the reality.

Although traditionally India and Pakistan are considered supreme rivals, ultimately, modern Pakistan can handle India’s random acts of aggression, as was seen in the aftermath of February’s Pulwama incident. Moreover, if India truly seeks to take its place as a leading global super economy, it is going to have to start focusing far more on internal development and far less on showing off its military power during fruitless skirmishes – whether against Pakistan or against China.

In an age where even the United States (US) under Donald Trump has traded the war making of the George W Bush and Barack Obama years for more modest money-making initiatives, India will inevitably be pulled into such a path if it is serious about economic development. This will be the case even if this shatters the dreams of the most extreme elements of the ruling Bharatiya Janata Party (BJP), whose Akhand Bharat (undivided India) fantasies are unlikely to ever be realised. The fact that India has quietly semi-normalised relations with China in an age where India is moving ever closer to the US proves that there are severe limits to the hyper-nationalism that fills the screens of pro-BJP domestic television.

But unlike India, Afghanistan is a country with little to live for. Its economy is non-existent, its biggest export is violence and its biggest import is foreign war. Such a desperate country whose fledgling leadership continues to fan the flames of regional separatism and Pashtun supremacist ideologies is dangerous even though it is weak. One could go further and say that Afghanistan is dangerous because it is weak.

Recent history has shown that one needn’t rule a rich nor mighty state to export terror. The fact that the groups that have terrorised Pakistan in recent decades have all been derived from or have been armed from west of the Durand Line is proof positive of this. Likewise, while Afghanistan has never had a truly sovereign economy, such a broken state in a strategic location will always find some rich foreign patron to exploit it as a pawn in a larger game. This has happened with respect to the British Empire, the Soviet Union, India and the US, and it will continue to happen with some other foreign patron, even if the US eventually withdraws from the quagmire that Bush inaugurated in 2001.

As such, Afghanistan will continue to exist as a disunited state whose leadership elements can survive only with a negative narrative which seeks to antagonise Pakistan by politically poisoning the people of Khyber Pakhtunkhwa (K-P) whilst the country’s radicals will also continue to threaten Iran by exploiting the naturally pro-Iranian Hazara minority of Afghanistan in attempts to drag Iran into an unnecessary quagmire. Afghanistan is also a natural soft underbelly for terrorists seeking to infiltrate Russia via central Asia, whilst the same can be said of those who wish to cause harm to China via its remote north-western borders.

Because of this, Pakistan needs to diplomatically co-opt elements within Afghanistan that have been and continue to be equally victimised by Kabul regime after Kabul regime. The Taliban have come in after a cold 25 years since Pakistan realised that, while extreme, the Taliban were the only group that would cease to light fires across the Durand Line. It is now time for Pakistan to do what the US, Iran, Russia and China have long been doing and positively engage the Taliban with renewed lines of diplomatic communication. If the US can barely take the current Kabul regime that it created seriously, there is no reason for Pakistan to be more royal than the king in this respect – especially since in Pakistan’s case such a policy would be active masochism masquerading as diplomacy.

In terms of other minorities, including the Hazaras, Pakistan can work to improve relations with neighbouring Iran by jointly expressing a desire to ensure that life for this traditionally oppressed minority in Afghanistan has its collective rights looked out for under a new Afghan regime. The same is true of the Tajiks of Afghanistan, whose interests ought to unite the wider Persianate world, the Sunni Muslim world and the wider post-Soviet space in which Russia has key security interests.

Because Afghanistan is a failed state, the US has now invited its enemy from the early 2000s to the peace table, and Russia likewise hosts an Islamist faction that it once considered a supreme enemy following the Soviet Union’s humiliation at the hands of the Mujahideen. In this sense, Pakistan will have an easier time communicating with the Taliban than those who ironically are communicating more with the Taliban than Pakistan has done in 2019. Likewise, just as Russia, Iran and the US are talking to former enemies in Afghanistan, Pakistan can also pivot towards providing guidance and support to oppressed naturally pro-Iranian elements in the Afghan state that once viewed Pakistan with suspicion.

This triangulated strategy which cuts out the raging but paradoxically floundering Kabul middleman whilst engaging with important constituent elements of the Afghan failed state is a far better use of Pakistan’s time than its embarrassing attempts to pretend that a regime which refuses to recognise Pakistan’s sovereign borders whilst allowing terror to flow across the Durand Line is somehow a regime worthy of redemption, let alone of friendship.

If Pakistan does not realise that Afghanistan is its principal enemy whose violent geopolitical characteristics can be tamed only by appealing to politically and ethnically marginalised elements of the Afghan state, Pakistan will have committed a great crime against itself – the crime of foolishness, leading to attrition and then to doom.