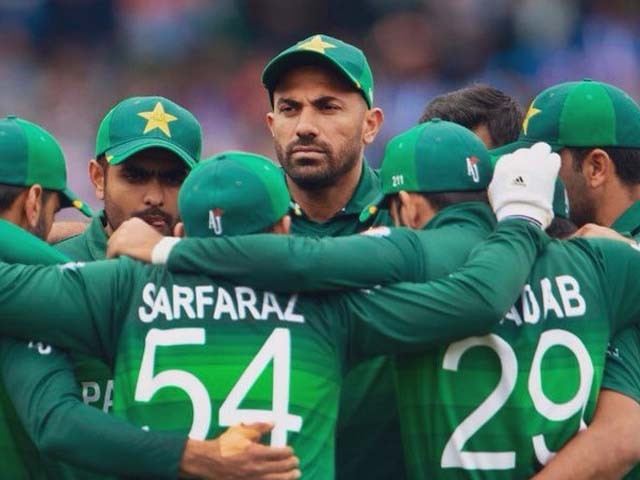 If the Pakistan team can learn anything from Wahab then let them learn his never die attitude. PHOTO: TWITTER/ WAHAB RIAZ

Pakistan needed 22 off 20 balls with three wickets in hand against Afghanistan. How Pakistan got themselves into that situation is a whole other story, but at that moment desperation had kicked in. World Cup dreams, pride, honour and reputation were all hanging by a thread for Pakistan as a defeat at the hands of Afghanistan, handcrafted by Pakistan’s players, seemed inevitable.

Out came Wahab Riaz with a fractured finger to rescue Pakistan on a pitch that offered turn from the east coast to the west. This sounds exaggerated, almost like something out of Bollywood’s lacklustre flicks, but it’s not. This wasn’t like one of Salman Khan’s heroic scenes, with 20 cuts before the best shot is taken. This was Wahab, with an actual injury on his right hand and with only one shot at saving Pakistan before all hell broke loose back home. ­

The first ball Wahab played was a dot, leaving the equation at 22 runs off 19 balls. This was a man who was never meant to be in the middle of this mess but got called in at the last minute. The very next ball, he smashed a four through the covers and everyone in the stands heaved a sigh of relief.

In the penultimate over, Wahab was back on strike with the equation looking even more worrisome – 16 runs needed of 12 balls. Feeling the desperation for a boundary, he swung his bat so hard that had he connected, the ball would have needed an air hostess to fetch it, but he didn’t make contact. However, he hit the fourth delivery in the over, and millions of hearts in Pakistan skipped a beat as the ball hung in the air. But as soon as it landed in the stands, the stadium erupted. All that pressure was released after just one burst of exhilaration. Wahab Riaz of Pakistan in action. Imad Wasim is congratulated by Wahab Riaz after scoring the winning runs.

Wahab’s match-winning contributions are often overshadowed by his statistics. But one must remember that trying to define a cricketer is a muddled task. Many become overly reliant on statistics, but these figures are just numbers that lack a narrative. They can make an ordinary player seem exceptional and a match-winner seem ordinary. Numbers don’t tell the whole story. Wahab’s 15 from nine balls won’t change his average or his strike rate, but for Pakistan, those 15 runs were as precious as gold, if not more.

Many would say that Wahab’s ability to get boundaries in the most desperate times is sheer luck, but I call it character. He is a player every team should aspire to have. Not because he can swing the ball like Wasim Akram or crush a toe like Waqar Younis, but because he is a fighter. He is a man that gives it his all each time he steps out to play on the big stage for his team, even if it means having to pitch in with the bat because his teammates have failed, yet again. Like any other player, Wahab can have a bad day with the ball, but I know that as a fan I’ll always be satisfied with his effort and his passion. The same can’t be said about the other players that have shared the dressing room with him.

Describing Wahab using statistics would be an injustice. In order to truly understand who Wahab is you need to see him run in, you need to see him single-handedly take on the opposition, and you definitely need to see the pain in his eyes when catches go down on his bowling after all the effort he has put in. Once you have seen all that, then let me know if the numbers still hold any meaning.

Wahab doesn’t deserve to be on the losing side whenever he plays because he is a true team man that would risk it all to get his side over the line, even if it means sustaining more injuries. That’s Wahab for you – a soldier, a fighter and only then a bowler.

Ironically enough, Wahab, who has saved the day for Sarfaraz Ahmed, Mickey Arthur and Inzamamul Haq many times during this World Cup, was initially told that he was not part of the team plan for the tournament. Therefore, for him to come back, put those comments behind him, and play so well is sensational. Whether Pakistan qualifies for the semi-finals or not is a different story altogether. All I know is that Wahab is a hero and he has fought like one throughout this tournament. If the Pakistan team can learn anything from Wahab then let them learn his never die attitude. The fans do not demand anything else. We all know that one team has to lose, but if they go down fighting like Wahab then there never will be any complaints.

For his story to have a fairy tale ending, Pakistan would have to win the World Cup because this is most likely the last time we will see him in action on this stage. For all the memories he has left us with, it would make me extraordinarily happy to see him lift the cup before he wishes us goodbye. This is our last chance to appreciate him, after misunderstanding him throughout his career as a bowler that just leaked runs.

Wahab, we are sorry for not believing in you, but you are a champion. Bring the cup home for Pakistan!