When a dupatta and a nose ring become agents of patriarchy 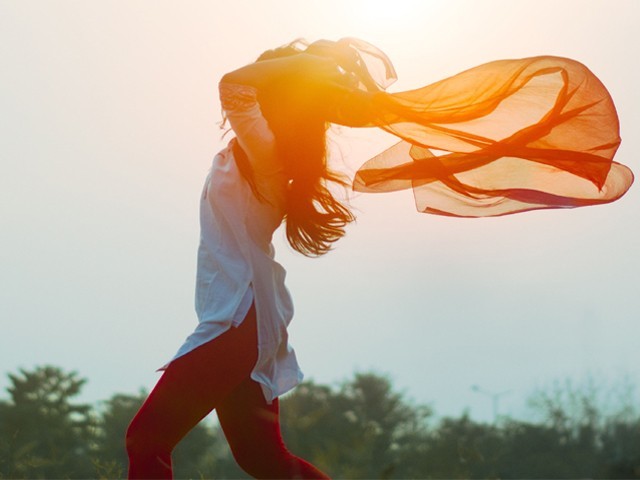 A dupatta sometimes becomes an instrument of restricting a person to constant shaming. PHOTO: PINTEREST

Coming from a conservative Muslim family where your male cousins won’t even look at you if you are not wearing a dupatta, I have always felt that my body was constantly scrutinised and kept under the male gaze. Forcing clothing around my breasts and a silver wire around my nose was equivalent to patriarchy establishing its territory. My gender which is deemed to be the ‘lesser one’ was expected to wear a sexualised cloth and a ring in order to assert my cultural identity as it makes me ‘unique’ and less ‘westernised’.

Women and their bodies have always been pedestalised to enforce a gender hierarchy in which men assert dominance by controlling what the other gender wears. The idea of tradition, culture, family honour, religion and marriage which extensively benefit males, often wrap themselves around a woman’s body and completely disregard the three Cs: choice, consent and comfort.

I was in 11th grade when a visit to my hometown Allahabad brought a significant change in my demeanor. I was asked to wear a dupatta forcefully so as to conceal the hint of my breasts from my brother and father. This made me curse myself for my body shape but I realised how futile it was as my 10-year-old cousin who hadn’t even grappled with the idea of sexuality was asked to wear the same. This led to a tedious process of me trying to match stoles with shirts and wearing long dupattas with kurtas every day. My discomfort was nothing compared to the importance of modesty and over-glorification of morality. I had to wear a dupatta as soon as I stepped outside the threshold, I had to wear it within my own house and hide myself from my own people.

Often my religion was used as a means to coerce me, which is quite ironical because the word dupatta is derived from a ‘Sanskrit’ word and can be traced back to Indus Valley, i.e. it has no association whatsoever with Islam. Nevertheless, regardless of the origin and association, it often acts as a means to constantly stigmatise a woman’s body. A dupatta can be used as a shield from the blistering heat and undoubtedly adds beauty to one’s clothing, but at the same time, for many it becomes an instrument of restricting a person to constant shaming.  The Better India reported the story of Rehana, a Muslim woman from an orthodox family in UP who had the following view,

“While on one hand dupattas are said to be the honour of women, the same dupattas are used to shut their mouths in cases of domestic violence and marital rapes. Many a time, this ‘honour’ is even used to hang women.”

When I reached college I was dragged to the nearest jeweller to get my nose pierced which is often symbolic of a woman reaching marriageable age. I also came to know that a simple accessory such as a nose ring carries behind it the notion of a modest woman who gets her nose pierced for the well-being of her future husband. Moreover, a silver wire implies that the girl has reached the ‘peak’ of her youth whereas a golden one implies that she is married. It made me realise that these norms are nothing but early preparations of an ideal bride ready to be given away. When I refused to adhere to these rules I was labelled ‘selfish,’ inferring that a woman’s body belongs to the society which clads her in the name of tradition and un-clads her when she is being ‘shameless’ enough to be violated.

Moreover, such adornments enforced as a facade of protection is an undeniably delusional theory that a cover over my chest and silver wire in my nose is enough to repel sexual predators. Such an idea enforced within a household does nothing but encourage ‘rape culture’ where the focus is on the woman and what she is wearing instead of the mentality of the people around, women being given the responsibility of protecting themselves from the ogling eyes.

An article, titled In conversation with my dupatta, raised a very important point,

“A family member who tells a girl what to wear and a man who gropes that girl on the street are both really saying the same thing: your body does not belong to you, I get to tell you what to do with it.”

For me, the fear of wearing dupatta immediately in front of male family members was equivalent to the fear a woman feels when she is walking down the street and is under the surveillance of the society. Moreover, these rules often lead to social conditioning, that is, they are normalised to the extent that it leads to complete indoctrination.

Aqsa Ashraf, a student pursuing BA (Hons) History from University of Delhi has the following opinion:

“I feel like over the years, I have been so conditioned, thanks to the ‘modesty’ that many women argue they find empowering that I cannot decide if I dress in a certain way because modesty empowers me or because I have been conditioned into accepting it.”

Personally speaking, I have experienced reaching out to grab a dupatta even if I am doing a menial job such as stepping outside to open the gate. When I am not wearing a dupatta, I would often hide myself partly while talking to my father because for some reason I felt shameful appearing before him. This also led me to distance myself from my family because covering myself before entering the room just to have a conversation was not only tedious but also humiliating. These rules not only make a person feel repressed but also leads to low self-esteem. Something as innocent as a piece of cloth and a nose ring when forced upon a woman can cause distress and make her feel suffocated.

These norms aren’t just enforced by men but also by women. Matriarchy is nothing but hidden patriarchy where a matriarch in the house advocates the same ideals as a patriarch. Moreover, there is a dichotomy to this issue because when I protest against wearing a dupatta and a nose ring, I am seen as ‘less of an Indian’, and if someone wears these adornments out of choice, she is labelled as ‘old-fashioned and backward’. It’s high time that the Indian society stops pedestalising a woman’s body in order to assert their own ideologies which benefits one particular gender. Its high time that people realise that it’s about respecting a woman’s choice, whatever she decides to do with her body is her business and unnecessary meddling in someone’s demeanour is abhorring.

The author is a literature lover and a music enthusiast.