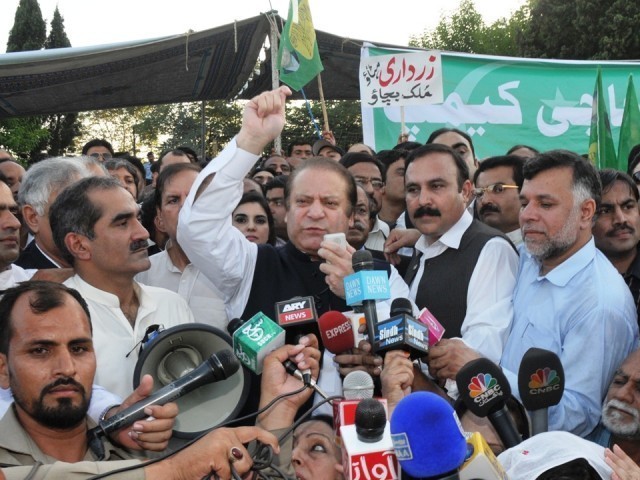 Nawaz Sharif and the PML-N are going to use the issue of electricity to get back into power.

In public, every member of the party has stayed on message: that the power shortage is a reflection and final indictment of the PPP’s terrible governance and has convinced the PML-N that the government must go immediately. In private, though, some members of the PML-N, while sticking to their talking points about the corruption and mismanagement of the PPP, admit that they hope to topple the PPP government before the Senate elections in March, to prevent the PPP from getting a majority in both houses of parliament.

In order to prevent that from happening, say PML-N sources, they have developed a two-pronged strategy that will play out in the streets of Punjab and the corridors of power in Islamabad.

For public support, the PML-N has chosen the simple rallying cry of “Go Zardari”, a demand they will take to the streets over the next month. But they may as well have titled their protests “Stop Imran Khan.” According to an MNA from the PML-N, the rallies will concentrate on areas where the PML-N feels that the PTI is encroaching on their vote bank. Nawaz Sharif is said to be worried that the PTI may siphon as many as 30 seats from his party and so will hit up Lahore, Dera Ghazi Khan and Mianwali, all areas where he feels he is vulnerable.

But there are more interesting plans that the PML-N chief has hatched up to try and force the government from power.

One of the more outlandish schemes Nawaz Sharif has considered is asking for en masse resignations in the assemblies from all his party members to try and stymie the Senate elections and rob them of their legitimacy. But this proposal has met with strong opposition from within the party and is most likely dead on arrival.

Nawaz Sharif also spent last week trying to woo PML-Q members back into the PML-N fold. He feels his best chance of success is getting the Like-Minded Group to officially leave the PML-Q and become a part of the PML-N. The hitch here is that the Like-Minded members do not want to give up their seats in parliament and so prefer supporting the PML-N without actually becoming members of the party.

Some PML-N workers are upset that among those being courted are those they see as turncoats like Salim Saifullah. Others who have been approached include Humayun Akhtar and Kashmala Tariq. Nawaz Sharif was in Islamabad last week for a dinner at the house of Senator Tariq Azim’s brother where all the Like-Minded Group members were also present. Nawaz Sharif is also hopeful that he can convince Ijazul Haq and Sheikh Rashid to join him, but the return of the AML party chief would once again be opposed by PML-N members who are yet to forgive him for betraying the party in 2003.

So worried is Nawaz Sharif now that he is also ready to accept PML-Q members who are still allied to the Chaudhry brothers. The only place where he has drawn a line is at ever welcoming Chaudhry Shujaat and Pervaiz Elahi back into the party.