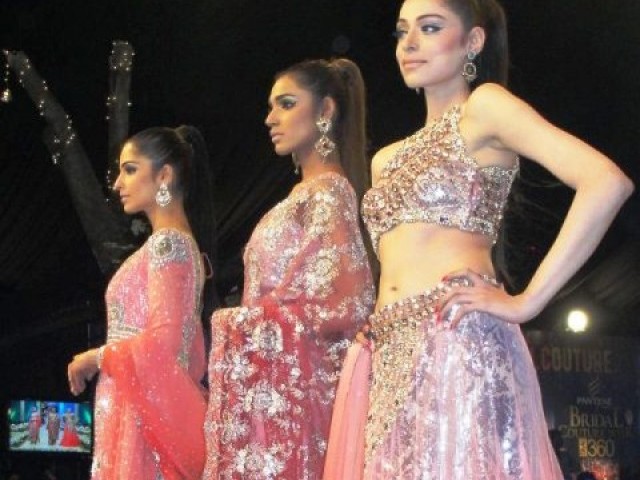 The Pantene Bridal Couture Week (BCW) 2011, took my breath away. Held by Style 360 the show featured designs by the biggest names of our fashion industry. It also brought to light a few Indian designers and some newcomers with fabulous talent. All in all, the night was packed with glamour and was couture at its very best.

J&S did a wonderful job of decorating the waiting area. The theme was predominantly Grecian with textured velvet draping on the walls in red and gold. Comfortable sofas and huge framed mirrors were placed aesthetically and urns filled with white tube roses courtesy of Naila Burhani added elegance to the much-awaited event. Inside the canopy, huge crystal chandeliers lit up the runway. White floral peacocks were flocked around trees lining the ramp.

A quick tip: if you ever go to a fashion show, make sure you carry a shawl – it was freezing cold in there.

And finally the show began.

Bright, bold colours seemed to be favourites of the night. Turquoise, shocking pink, orange, magenta, red, yellow, and emerald green were the popular colours. Pleats at the back or under the bodice were used by almost all designers. I was struck by the intricate detail at the back of the dresses. Beautiful sequinned lace or net running all the way down to the waist on what looked like a simple chiffon dress from the front and beautiful dabka work adorning the back with laces criss-crossing over the shoulder-blades made the dresses look so much more interesting.

What was exciting was the combination of different fabrics. Models sashayed down the runway wearing lehengas, long ankle-length A-line shirts, saris and angrakhas with infusions of different fabrics like banarsi, chiffon, organza, and velvet alike. In some cases, cotton was skilfully blended in adding that extra something to the dresses. I loved seeing mokesh make a comeback. Culottes and capris in gorgeous plums, reds and purples were a definite trend. Churidaars are here for a while longer, and I am glad. The dresses ranged from traditional and sophisticated to modern and flirty. It was nice to see more Islamabad based designers coming in to main stream such as, Bina Sultan of BNS Couture and Reem Abbasi of Keepsakes (jewellery).

Sabs, the Salon, was the official make-up partners for the event and to my untrained eye, the make-up, indeed, appeared perfect. This is the second BCW organized by Style 360 and as I met the models and designers backstage they gushed about how much they enjoyed the show. They were happy with how much it had improved since last year with, more designers and make-up teams joining the bandwagon.

I had the opportunity to talk to some people who participated in BCW and some coments by them are listed below.

Arooj Ahmed on what designer she prefers best:

“I know this question will land me in a lot of trouble, but for me it would have to be Fahd Hussain.”

“I love that Lahore and Karachi are working together…..The show is more organized (compared to last year), the designers are more creative and the girls are more energetic. The make-up artists are doing a more different and better make-up.”

“The clothes, the confidence of the models, and the standard is much higher this time. Right now I am wearing Mehdi and it’s smart and at the same time traditional. I feel gorgeous.”

“I like working with (Style 360. I have worked with them before. It gets better and better every time… Lahore and Karachi are equal at their best. Of course we have different kinds of socialites than Karachi does. Lahore, is home so it’s easier here.”

“Tiails, long shirts, a lot of flair, a lot of churidars are in for the winters.”

HSY (the ramp director for the evening):

“Fashion shows bring clothes to life. The inspiration for a show has to come from the designer and not the choreographer. A choreographer has to be a good listener. He has to understand what the designer wants and try to be able to translate that onto the set. It’s not 1992, it’s 2011 turning 2012. Designers choose their own music. They come to us with their own music because that’s what their vision is. You can’t change a designer’s vision.”

“The bridal season, as the years go by is becoming your own identity, in the sense that whatever you feel your personality is showing should be reflected in your dress. It’s an individual thing. Earlier bridal wear used to be more body-hugging and couture. But now it’s becoming a little less formal. You are getting a cleaner, leaner silhouette, getting a lot of deep tones like maroons and rusts and so forth. So traditional is always happening.”

Finally, I spoke to Nausheen Masud, a well-known face in media, who joined Style 360 as the General Manager only four months ago. Dressed in jeans and a beautiful sequenced top, with no make-up and grey hair she would have made Tyra Banks very proud. As I chatted with her she told me about the big changes that viewers were going to see on Style 360. She explained that though its major focus would always remain fashion, the channel will cater to people’s lifestyles as well. This means more programs on travel and living. Instead of repeating old shows and events, new programs were being planned that would keep viewers updated about the most current trends on the fashion scene.

“The channel has changed its look and pace a little bit and we are working on that a lot now. You will see more changes and a more happening channel. We are not running so much dated footage any more, everything’s fresh, we are giving as much current information on the fashion scene be it local or foreign. We are adding other elements of lifestyle like interior, architecture, travel. But our main focus has been and will be Fashion.”

It made me very proud to be a Pakistani to see how much encouragement our new artists are getting. Our country possesses so much talent, and the clothes I saw at BCW are the most beautiful I have seen in all my life. Here is hoping that Pakistan continues to support its very gifted and capable designers who, in my opinion, are some of the best the world has ever seen.

The Founder of Women’s Digital League. As part of her passion for social enterprise and not-for-profits, she has been working to train and send work to women in the remote valley of Karimabad, Hunza in collaboration with a local NGO and TimeSvr.com. Before founding Women’s Digital League, she taught as an ESL teacher at a private school. Maria holds an M.A. in English Literature and blogs at www.PakiMom.wordpress.com. .

Abida Hussain sat next to a man