Defeating the undefeated: I believe in #TeamGreen and their dream 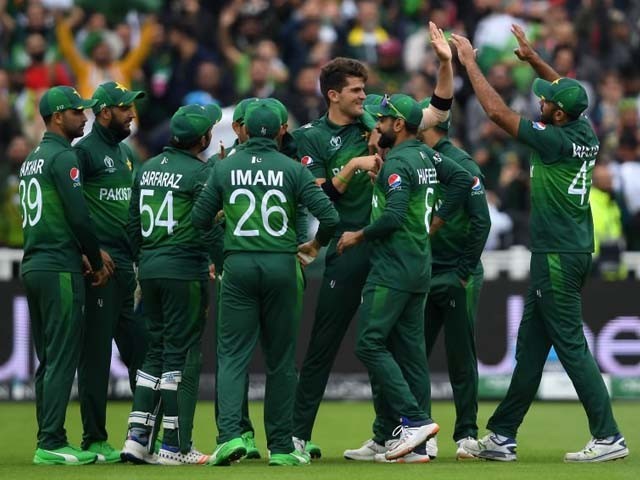 Babar Azam proved that he is a quality batsman and this is finally his break out innings. PHOTO: TWITTER/ CRICKET WORLD CUP

Regardless, Pakistan were sent in to field first and the story which unfolded was similar to their previous games. Mohammad Amir was sensational, striking early and taking the key wicket of Martin Guptill. From the other end, Mohammad Hafeez started proceedings initially, but the ball was soon thrown to young Shaheen Afridi who, in just his second over, struck gold by dismissing danger man Colin Munro.

Within the first 10 overs, New Zealand had lost three wickets and Pakistan were off to the perfect start. It was now up to the bowlers to capitalise on the inroads they had made and restrict New Zealand to a total under 260.

And they did exactly that, Afridi in particular. Coming in to the game, Afridi hadn’t been in great form because the length at which he had been bowling previously hadn’t really troubled batsmen. Much was made of a chat Wasim Akram had with Afridi prior to yesterday’s game, but whatever Akram said to the youngster seemed to work. Afridi clearly put his past performances behind him and lit up the game, ripping through the New Zealand batting line-up by picking up valuable wickets in quick succession. Shaheen Afridi celebrates after taking the wicket of Ross Taylor.

The key wicket of Kane Williamson was taken after a brief partnership, courtesy a great delivery by Shadab Khan. However, despite the seemingly hopeless situation, New Zealand showed great grit and determination. James Neesham and Colin de Grandhomme stitched together a crucial partnership, helping to restore a modicum of balance to the game. New Zealand did well to accelerate their scoring rate in the final 15 overs, ensuring that their bowlers had something to bowl at. The two Kiwi all-rounders were sensational in helping New Zealand reach a defendable total of 237.

It was now up to the Pakistan batsmen to hunt down a chaseable total in what would prove to be Pakistan’s first successful run chase in their 2019 World Cup campaign. Jimmy Neesham plays a shot as Sarfraz Ahmed looks on.

Pakistan’s innings with the bat started well, with the two left-handers hitting boundaries at a regular pace. But once again, it was the strike rotation that let them down and both the openers perished as a result. First Fakhar Zaman gifted an easy catch to Martin Guptill, before Imamul Haq was undone by a great delivery from Lockie Ferguson.

The partnership between Babar Azam and Hafeez was crucial in stabilising Pakistan’s run chase, but it was cut short once the latter tried to take on Williamson. As a result, in came Pakistan’s star performer from the previous game ­– Haris Sohail.

At a point when the game hung in the balance, Sohail joined Azam at the crease and the duo put on a great partnership, putting Pakistan firmly in a winning position. Under enormous pressure, the pair played some fantastic strokes and patiently navigated their way through a tricky spell of spin-bowling by Mitchell Santner. The Azam-Sohail combo was an absolute delight to watch. It would have been a perfect performance from the two had Sohail not been run out towards the end. But despite that, it was a magnificent effort from Pakistan’s new vanguard.

This was by far the best innings Azam has ever played, and perhaps the most important too. The 100 came while chasing, on a tough wicket, against quality bowlers, in a knock out game at the World Cup. The stakes don’t get much higher than that. It just goes to prove that he is a high quality batsman and this is finally his break out innings. With this comprehensive win, the momentum is definitely with Pakistan. But although the next two games may look relatively simple, Pakistan must not underestimate Afghanistan and Bangladesh. If the Pakistan players become complacent then they will be in for a shock.

The team needs to just get these two wins out of the way and then assess their strategy for the future. I believe in team green. They will pull this off!