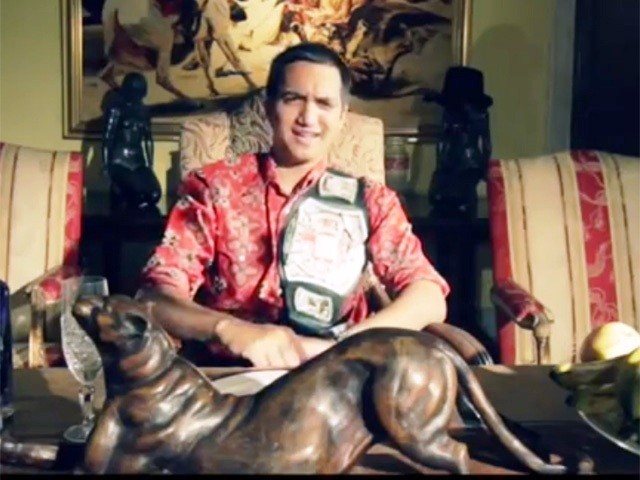 This video highlights the whole 'phadda' (verbal/physical fight) culture and our youth's obsession with wrestling, to reckless elite kids having fun with no boundaries.

“I bust quick in a sl**’s thick orange foundation

I’m a foreign damnation at your borderline waitin’

Horrified Satan with an angel to punch

‘cuz all these cookie cutter f*****s be fakin’ the funk

Yeah, uh, so many babies yappin’

or forward – depends on how you look at it

Rude boy status, so bad, but damn I’m good at it

I should’ve been king, cuz I open your minds

my revelation brings truth, deliver hope for the blind

I make a terrorist tear a wrist, prepare for his funeral

The most hated, but I know there’s no greater

Power junkie on a binge and damn I’m so faded.

To what extent was this music video your vision (the look and feel of it; the narrative; its stylistic techniques)?

Adil Omar: I’d say this was something I wanted to have fun with and I had a similar vision, but I’d give Aisha Linnea the majority of the credit for that. She has insane ideas. Shahbaz is a genius behind the camera and with editing. A lot of it was inspired by Hammad Khan’s upcoming film, ‘Gol Chakkar,’  which also features ‘Paki Rambo’ on its soundtrack. We also wanted to bring in a lot of the absurd aspects of modern Pakistani culture from the whole Jinnah Super (Islamabad’s main marketplace) and Pindi thing (snooty attitude towards Rawalpindi), to the whole ‘phadda‘ (verbal/physical fight) culture and our youth’s obsession with wrestling, to reckless elite kids having fun with no boundaries, and taking the p*** out of mainstream videos and pop culture by replacing alcohol with Pakola (local soft drink), kids snorting Tulsi (supari) instead of cocaine, me dressed as a Jinnah Super version of Charlie Sheen, mixed with a lot of random absurd imagery which doesn’t really fit anywhere but it’s art, it shouldn’t have any limits and doesn’t need an explanation.

Describe the persona you’re adopting in the video; would you say this characterization reflects a side of your own personality or is it entirely fictitious?

Adil: I’d say this is more honest to my image and personality than any of the other videos I’ve done. Sure, I’ve had fun in the past too, but that’s mainly cool serious rapper stuff like trying to act hard and be the biggest bad*** you can. In reality, though, I’m not a street thug nor do I claim to be. My music might be hardcore but I’m still just a goofy kid with a sense of humour who wants to have fun with it, I’m not really trying to prove anything. Sure, there are fictitious elements in it, I don’t endorse violence at all, it’s just entertainment, but overall its me. It’s also my tribute to the sort of hip-hop I grew up listening to and fell in love with—Cypress Hill, House of Pain, Beastie Boys, Funkdoobiest—where you could still be a bad*** and hardcore without taking yourself too seriously. The irony is, even though I completely let go of my hardcore King-Kong rapper ego on this one, it still made me look like more of a bad*** than my last few videos did. On a side note, I don’t actually participate in underground fighting tournaments, nor do I spray Pakola in the faces of unsuspecting girls.

Does the video have a lot do with the song or is just one of many interpretations?

It’s just one of many interpretations. I couldn’t explain it but you as a viewer could try. You might be right, you might be wrong.

How would you like viewers to interpret and respond to it?

Adil: As entertainment, plain and simple. I don’t want anybody to look too deep into it and I don’t want people to ask me how it represents Pakistan. It’s a video we did, it’s all in fun and it’s as simple as that. My western fans get it, but the reception in Pakistan has been so mixed.

You’ve been quoted as saying the title ‘Paki Rambo’ is inspired by a line in the British film ‘Four Lions’. Is ‘Paki’ the new ‘Nigga’ in hip-hop (i.e. urban usage of racist term which is only considered politically correct when referring to oneself)?

Adil: I wouldn’t say that necessarily, but in a similar way, it is about embracing an insult and turning it into something positive which not only Pakistani kids, but also Indian and other South Asian kids can be proud of. I’m not a blind nationalist but rather than letting ‘Paki’ hurt you, look at the context and embrace it if you are one. It’s about a certain attitude, and that’s what being a ‘Paki Rambo’ is, not giving a damn, being proud of what you are and embracing your identity while maintaining a sense of humour. Words are just words, the intentions behind them matter a lot more than the words themselves.

There are always people who don’t comprehend humour or sarcasm; do you think most of your viewers (in Pakistan and overseas) ‘got’ the satirical elements of the video?

Adil: My overseas fans and viewers did. The response to this video has been overwhelming overseas because they get it. Not only have the fans been in huge support of it, people like Cypress Hill and House of Pain members themselves have shown love. It’s been shared on the social networks of B-Real and Everlast, it’s been played by B-Real on his live show to good responses, it’s been on various websites and blogs with plenty of love. Other people who have also shown support overseas and locally include Riz Ahmed (actor from ‘Four Lions’ and ‘The Reluctant Fundamentalist’), Kelly Carlin (daughter of comedian George Carlin), Bakhtawar Bhutto and Naked Tyrant Productions.

The only legitimate criticism was some of the violence in the fight scenes, and some of the sexism in the song and video such as the t-shirts I was wearing, etc but the company of those shirts, ‘Two In The Shirt’ (abbreviated TITS) has launched a campaign for breast cancer awareness and research which I’ve also been active in promoting not only by wearing their clothing in my videos, but also through my social networks. I’m not Bono. I’m not all about riding on causes for my own self-promotion at all, but I would definitely endorse a quality product that’s also doing some good for humanity.

The reception for the song and video in Pakistan has been extremely mixed and divided. You either hate it or love it. Half the people see it for what it is, the song and video both, and they love it. Then the other half are too bent up on what they think it represents, not getting the humour in it, and not understanding what the song is all about, but, hey, if you don’t get it, then I don’t want you in my fan base in the first place. You’re not my target audience. I’m not caught up with trying to be some sort of celebrity at all, I hate that garbage. I just want to make music for myself and my target audience while providing quality entertainment. I don’t think Pakistan has even adapted to hardcore hip-hop yet, so accepting it is a long shot, but I’ll still try to open everybody’s mind to it at least.