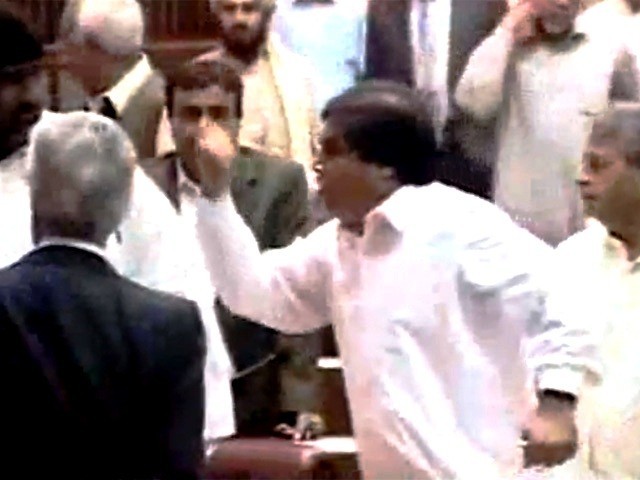 Our political leaders can’t debate matters of interest, on a national platform, in front of a television audience, without hurling personal insults and making school children in the playground look more mature by comparison.

The two antagonistic tribes, face off in a habitat where they are forced to coexist, as viewers watch bemused, for the language spoken by this warring species is only decipherable to its own kind, and the experts who translate on television for the viewing audience.

Like with communication between all primitive beings, misunderstandings can happen. Sometimes, these verbal squabbles lead to physical altercations, which don’t come as a surprise to those of us watching, because the aggressive body language on display betrays a deep seated level of animosity.

On this particular instance, between the testosterone flowing opposing males, it starts with both finger pointing, and finger wagging, and soon leads to arm waving and chest thumping. Minutes go by before the body language gets even more aggressive; the male superiors resort to teeth baring – a clear sign of hostile intent in the animal kingdom.

But, it doesn’t stop there. The contest eventually turns to shouting and screaming, and is soon followed by pushing and heaving. The audience watches, thoroughly entertained, with all signs pointing to a full-scale fist fight between the creatures. While the viewers of this battle come from all walks of life, they all share one thought at this moment in time: things are about to get uglier.

Suddenly, before the two tribes can leave each other black and blue, the alpha male, jumps in to restore order. Amazingly, he succeeds in keeping things from boiling over. There is an obvious mark of respect for the alpha male. It isn’t the large bush of hair on his upper lip, his experienced hairline, nor his recently awarded PhD, which the clans respect. Rather, it is the fact that he is a powerful member of the ruling tribe that finally makes them see reason.

Sadly, what I have just described to you isn’t a battle between warring gorillas that I watched on The Animal Planet.

In fact, silverbacks caught facing off on camera tend to appear far more civilized by comparison.

No, unfortunately for us Pakistanis, this is an incident that took place at our National Assembly quite recently, between the PML-N and MQM.  Things began when the leader of the opposition, Chaudhry Nisar Ali Khan, of the PML-N political party, panned MQM party leader Altaf Hussain, for a statement against the current Pakistani Prime Minister Yousaf Raza Gilani, and for constantly leaving and rejoining the government. And then they took a turn for the worse when Nisar made poorly hidden personal attacks on Altaf Hussain’s personal life, and when he accused the MQM of terrorism.

When the MQM’s turn came to speak, their speaker returned with verbal jousting of his own, which was too much for PML-N league’s lawmaker Abid Sher Ali, who made an attempt to physically attack an MQM party member. All hell broke loose from there on, though to their credit, some politicians from both sides of the fence, including alpha male Rehman Malik, tried to maintain order.

But the details don’t really matter. What matters is that our political leaders can’t debate matters of interest, on a national platform, in front of a television audience, without hurling personal insults and making school children in the playground look more mature by comparison.

Regrettably, this wasn’t an isolated incident. Not long ago, Pakistan Tehreek-e-Insaaf Sindh President Naeem ul Haq, and Sindh Chief Minister’s adviser Jamil Soomro, on a live television program on Business Plus, turned to name calling, shouting, and exchanging physical contact. If adults can’t communicate on sensitive issues, without being able to control their emotions, what ability do they demonstrate to lead us?

After the National Assembly fiasco, I did a quick YouTube search for “Pakistani Politicians fighting”, and came up with over six thousand solid hits – far too many for me to rifle through. Fortunately, someone was kind enough to put together a bit of a package, which is chock-full of embarrassing shouting matches between our so called leaders.

But, while politicians are quick to blame the media for instigating these circuses, there were no journalists rattling the lion cage at the National Assembly.

Something interesting to note from the internet reactions to this debacle is that while most Pakistani citizens are disappointed, or flat out amused, not one person is surprised. Like passengers on a sinking ship, we seem to be resigned to our fates, and pragmatically, enjoying what amusement our statesmen can provide. It is just too bad that in the long run, this amusement bears an expense more than the cost of a ticket to the zoo.

In the end, as I watch the politicians, and compare them to the uncivilized terrorists they are supposed to be protecting us from, I am reminded of a piece from George Orwell’s Animal Farm:

“No question now, what had happened to the faces of the pigs. The creatures outside looked from pig to man, and from man to pig, and from pig to man again; but already it was impossible to say which was which.”