Namaaz: Not just a personal matter 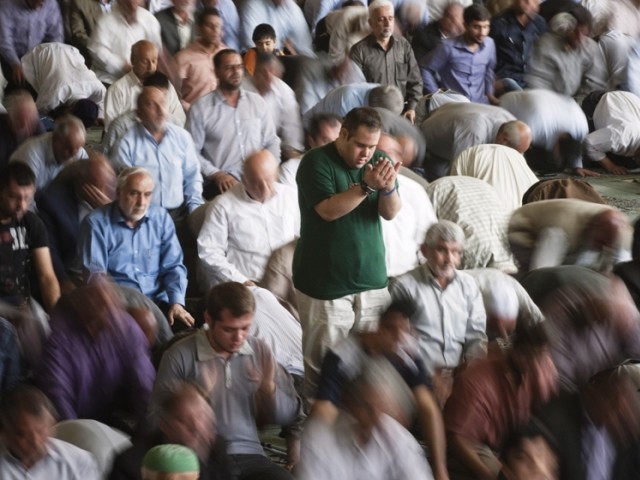 Islam and being a Muslim is not just a 'personal matter.' It is a matter concerning the entire Muslim Ummah. PHOTO: REUTERS

Call me conservative, call me old, call me a buttoned-down bore or call me whatever you like – in the end I am the only one who can define my identity because I know what I am. I am not a very good Muslim and I don’t belong to a religious or extremist community. However, personally, I would be absolutely mortified to say “No, I don’t pray Jummah“. Once I too used to believe that prayers and religion were a personal matter but I have come to the conclusion that religion is very much shared and communal.

Growing up, every Wednesdays after Asar prayers some bearded men from a nearby mosque use to go from door to door, urging people to join in on a gasht (walk-in sermon). My brother and I dreaded these and every Wednesday when the men would appear at our door and ring the bell, we used to beg our mother to make excuses for us. She would say:

Thus, my brother and I used to successfully evade these tableeghi men every week. After a few years,  I moved to Karachi and enrolled at a local university. I lived in the university hostel. One day I returned from class completely exhausted and fell into bed without bothering to change my clothes. Suddenly, I was woken by a knock on my door. Disgruntled and annoyed I opened my door and inwardly uttered a string of abuses at what I saw. Alas! The university had its very own religious group of tableeghi students.

Now I had to invent new excuses to avoid these young men whenever they came knocking.

However, with time I began to wonder what weakness of mine was not giving me the courage to face these tableeghi men. I would often justify my decision by saying:

(Whether I pray or don’t pray is my problem.)

Despite this reasoning with myself, I was still dissatisfied and there was a nagging feeling inside. I started to reason as to why religious scholars impose on other peoples’ personal religious beliefs. I began to read the Holy Quran and hadiths on tableegh and dawah. It was only then that I understood that Islam is not just a ‘personal matter’. Rather it is related to the entire Muslim Ummah.

Because, if religion really was a personal matter, then the Prophet Muhammad (pbuh) wouldn’t have preached and had interactive sermons. Nor would he have encouraged people to pray together. Moreover, he wouldn’t  have asked other Muslims to spread the teachings of Islam. In addition to this, if  it really is a personal matter,  why would the Azaan (call to prayer) be a practice common to Muslims all over the world? Furthermore, why would the Quran guide us to offer prayers on numerous occasions?

If some Muslim brothers can help explain the teachings of the Holy Quran and can remind us when it is time to pray, why do we respond to these practices so harshly?

We need to understand that Islam is a community religion that encourages brotherhood.

It teaches us to maintain ties with our neighbours and to treat servants as equals. Thus, if sitting together and listening to a sermon can encourage these feelings of camaraderie, then why are we so against this?

A business graduate from one of leading business schools in Pakistan who is now pursuing his career as a Chartered Accountant .