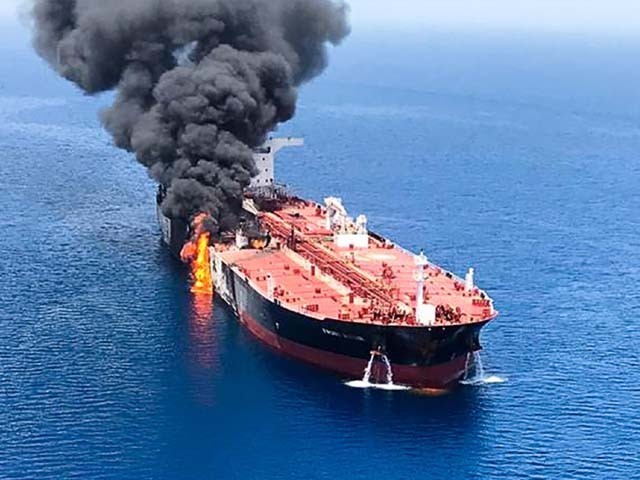 Fire and smoke billowing from a tanker said to have been attacked in the Gulf of Oman. PHOTO: GETTY

Iran has shot down what it claims to be a United States (US) spy drone in the Strait of Hormuz, accusing Washington of violating its airspace amidst escalating tensions between the two nations. Two days earlier, the US announced that it will deploy 1,000 additional troops to the Middle East in response to Iran’s “hostile behaviour”.

The attack on two tankers in the Gulf of Oman last week marked a tipping point in their steadily deteriorating relationship, and although both countries insist that they want to avoid war, there are fears that recent developments could inevitably result in military confrontation. As hostility heightens, less attention is being paid to the conflicting narratives surrounding who was responsible for the series of tanker attacks in the Gulf. Instead, the spotlight turns to the Donald Trump administration’s ongoing campaign of punitive action against Iran, which is finally yielding unfortunate yet predictable results.

#BREAKING Latest images from US military show better view of what appears to be Iran #IRGC on fast attack craft approaching damaged tanker, removing limpet mine. Damage appears to be clearly made by limpet mine, weapon used by #Iran in past. pic.twitter.com/i6PNQgGUGX

"It is the assessment of the U.S. government that Iran is responsible for today's attacks in the Gulf of Oman…."@StateDept @SecPompeo pic.twitter.com/sTIB0p1kCE

What we know about the attacks

Almost immediately after the attacks, Secretary of State Mike Pompeo publicly accused Iran and appealed to foreign leaders for a united response. Tehran’s vehement denial of the attacks was undoubtedly met with suspicion when footage of a military boat appearing to detach limpet mines from one of the tankers was circulated by US intelligence.

The United Kingdom (UK) and Saudi Arabia supported their ally by stating that no one else could have been behind the attacks, although they both warned against war. However, the European Union (EU) and Japan are less convinced, asking for more evidence and clarification before placing the blame for the attacks at Iran’s doorstep. This comes after Japanese Prime Minister Shinzo Abe’s state visit to Iran, where he attempted to engage in diplomacy between both parties. Exactly who was culpable in last week’s attacks remains unclear, but as Abe’s visit highlights, the international community is war weary and too many interests hang finely in the balance to be sabotaged just yet.

While I very much appreciate P.M. Abe going to Iran to meet with Ayatollah Ali Khamenei, I personally feel that it is too soon to even think about making a deal. They are not ready, and neither are we!

It is no secret that the diplomatic and economic isolation of Iran is a key US foreign policy objective. In a bid to undo what was dubbed Barack Obama’s crowning foreign policy achievement, Trump has not only reneged on the Joint Comprehensive Plan of Action (JCPOA), but within a short span of time has restored crippling sanctions on Iran with the purpose of bringing its vital crude oil exports to zero. Key importers including Japan, China and India have reluctantly reduced their intake of Iranian oil ahead of the sanctions’ start date with the hope of being granted a waiver, but recent events in the Strait of Hormuz paint a grim picture for regional diplomacy and the future of the nuclear deal.

On May 8 2018, US withdrew from #JCPOA, violated #UNSCR 2231 & pressured others—incl #E3—to do the same
After a year of patience, Iran stops measures that US has made impossible to continue
Our action is within the terms of JCPOA.
EU/E3+2 has a narrowing window to reverse this.

Rather than wondering whether Iran truly was behind the attacks, it is more useful to ask, who has more to gain from the fallout? Iran has already declared that it will disrupt oil shipments passing through the Strait of Hormuz if its economy continues to be suffocated. In essence, the stance is: if we cannot export oil, then no one else should either. Still more worrying is Hassan Rouhani’s announcement that Iran will actively breach the nuclear deal by exceeding the set limit of stockpiled enriched uranium, which has been hinted at since May. With its enrichment level inching ever closer to that of weapons-grade, Iran shows no signs yet of buckling under increased pressure from the US – whom it accuses of stifling its economy, alongside key observers of the nuclear deal and their feeble attempts to protect its oil sales.

The tanker attacks have proven timely in that they have encouraged Iran to scale back its commitments to the 2015 deal, including halting the redesign of their heavy-water reactor at Arak, capable of producing plutonium suitable for a bomb.

Meanwhile, US sanctions have led to an economic crisis in Iran. Observers of the nuclear deal have been forced into compliance for fear of facing secondary sanctions, which the US hopes will open up space for renegotiations under their own terms. What was originally a deal intended to deter Iran’s nuclear capabilities, could soon transform into a wider disciplinary exercise that would diminish the country’s overall position in the Middle East, by targeting its ballistic missile programme and curbing its involvement in regional conflicts.

Naturally, Iran still objects to any form of renegotiations, with Ayatollah Ali Khamenei vocally expressing his distrust of Washington. This has led many to question: will Trump’s policy of maximum pressure even work, or will it propel him in to a military conflict that no one wants?

Even for Trump and his band of like-minded advisors, stumbling into armed conflict with Iran without damning evidence of the latter’s involvement in the attacks last week is foolhardy and unlikely for now. Trump has expressed that he is not looking for regime change, proving that all parties are treating war as the last resort. Hawkish members of the administration, namely Pompeo and National Security Advisor John Bolton, would nevertheless seize the smallest chance to retaliate if Iran goes too far. So, like two poles of opposite and equal stubbornness, neither state is backing down, with the hopes that the leverage each one possesses will be sufficient to make the other capitulate.

If the US truly does not want a war with Iran, and its aim of devastating the country’s economy was to renegotiate the nuclear deal under more stringent terms, then Trump has yet again displayed his brand of hot-headed foreign policy based on rushed judgements and failed unilateralism. Now alleging that the tanker attacks were “very minor,” Trump perhaps realises that he has triggered a domino effect in the already unstable region, giving Iran the perfect excuse to resume its nuclear programme and potentially nullify any progress made since 2015.