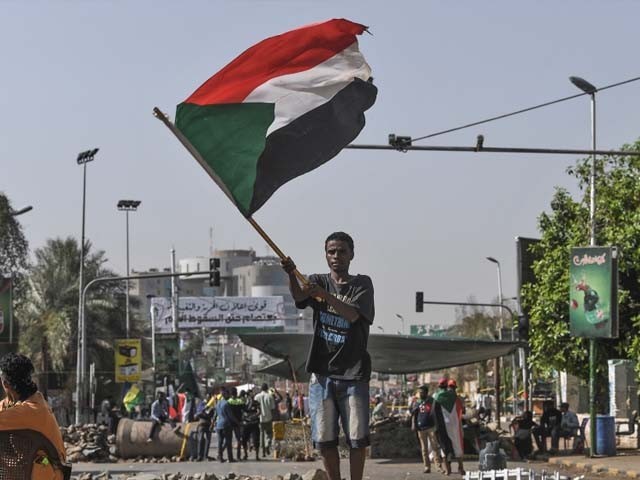 A Sudanese protester waves a national flag near a makeshift barricade. PHOTO: GETTY

Rarely does Africa make American headlines. Briefly we may hear about Boko Haram, or read about pirates off the coast of Somalia. Occasionally, a rich American game hunter murders an animal in Africa which, while heart-breaking, triggered more outrage than the unremitting plight of human beings across the region. Sometimes we learn of military losses in Mali, never asking why American soldiers are deployed there to begin with. Beyond that, Africa is perceived much like it was during the time of Joseph Conrad – a “heart of darkness”.

This disinterest persists even during the current upheaval in Sudan, where ordinary citizens have been protesting, and have been murdered while doing so, to oust the internationally notorious, brutal Islamist dictator, General Omar Bashir. They succeeded, only to have another tyrant take his place.

At least 19 children have reportedly been killed in Sudan and another 49 have been injured since 3 June.

The children of #Sudan want peace. The international community must take a firm stand in support of their aspirations.#ChildrenUnderAttack pic.twitter.com/S3TaCBYPJV

Protesters in Sudan have vowed not to give up. We stand with them. pic.twitter.com/zmtU3c0gy9

Bashir shackled Sudan to a brutal tyranny for decades and has been sought by the International Criminal Court (ICC) since 2009 on two separate warrants for war crimes. In 1993, the United States (US) blacklisted Sudan under Bashir as an international sponsor of terrorism. Osama Bin Laden himself, exiled from the Saudi kingdom, bought property in one of the finest neighbourhoods of Khartoum while investing in Sudanese agriculture and construction industries in the years before the 9/11 attacks.

Today, General Mohamed Hamdan, Bashir’s former enforcer, finds himself holding the reins of power in Sudan after ordering the military to brutally crackdown on protestors and initiating a nationwide internet blackout.

The tone had already been set following election fraud in the nation, but the African Union lacked the appetite to confront an obvious theft of an election. Plans for the African Union to investigate the electoral fraud were soon dropped, fuelling resentment. Following a sharp rise in prices and food shortages, the masses of Sudan took to the streets. In the wake of the violent crackdown on protestors in Zimbabwe, Bashir’s forces felt comfortable firing into the crowds with impunity and soon Hamdan felt emboldened enough to seize power. While the major powers in the African continent, Nigeria and South Africa, were facing imminent elections of their own, the continent itself was disinterested in the events in Sudan.

Further afield, the international community, whether the US, Britain or France, each have become more insular and mired in their domestic politics. They are unable to mount more than lip-service by way of reaction. Britain and Europe remain ensnared in the quagmire of Brexit, while France is struggling with a response to its own protestors, the Gilet Jaunes. America, battle-worn after almost two decades of conflict in Afghanistan and Iraq, is unwilling to consider an intervention in Sudan. National Security Chief John Bolton articulated an Africa policy focusing on repelling Chinese expansion in Africa and, to a lesser extent, Russian influence. That talk has proven cheap.

"Why should Americans be concerned about Sudan?" somebody asked

3 – Do we only care about humanitarian crises in countries when oil or $ is involved?

With rising tensions in the Arab gulf bringing Iran and the US closer to a proxy conflict, Sudan will remain eclipsed. It’s hard to imagine the current Donald Trump administration (and even a possible second Trump administration) equipped, let alone capable, of pursing a more muscular Africa policy. The US is ambivalent because Bashir’s regime was very willing to collaborate with them when needed, with the tacit understanding that the US would not interfere with Sudan’s own human rights records. Perhaps the new leader will be equally cooperative. Clearly, rocking the boat suddenly got a lot less attractive.

In other words, plagued by their own domestic problems, the US, European Union and Britain simply cannot place Sudan on the priority list.

Certainly, heartrending images briefly illuminated Sudan’s plight to the world and Sudanese women have been especially prominent in the nation’s mounting calls for democracy. One protestor, Alaa Salah, caught the attention of the world. The 22-year-old Sudanese woman clad in white clambered atop a car in Khartoum and began chanting in an effort to give hope to the hopeless. Her striking poise surrounded by chaos gave Sudan a brief international spotlight. But upon seeing Hamdan attain power, she lamented:

“We thought this might happen. For years Hemeti (Hamdan) killed and burned in Darfur. Now Darfur has come to Khartoum.”

My heart goes out to Sudan. Your struggles are heard, your pain is felt.

I stand with you Sudan,

However, the bright spotlight she helped shine on Sudan was soon extinguished. So why are these protests failing to ignite outcry from around the world?

Lacking even a social media hashtag (the lowest bar for activism and in some cases the only form of activism), the international community’s utter disengagement with Sudan is apparent.

Eight years after the Arab Spring and the advent of the Syrian war, the international community is no longer transfixed by mass protests in former dictatorships. The media has now become disinterested in those who briefly stretch their democratic wings only to have them brutally clipped once more. Tahrir Square became a household name, but today the international community is beyond jaded.

Here in the West, we are aware of our cynicism and disengagement. We choose to neglect the enormously brave, self-sacrificing Sudanese fighting for democracy. Over 118 people have been killed following Hamdan’s brutal crackdown on protestors. The protests ousted one of the longest serving tyrants in the region, but the citizens were denied a civilian transition government and are fearful that yet another military coup is already a fait accompli.

The hallmark of Sub-Saharan Africa is the tenacity of its post-independence leaders and their inability to transfer power. No less than 10 African leaders have held power for more than 30 years. At 37 years, Bashir was merely par for the course.

No western media has reported on the massacre. Copy/paste this tweet or RT to spread awareness and stop it being suppressed.#SudanMassacre#BlueforSudan pic.twitter.com/acuizgmVhZ

Maybe #BlueForSudan won't save the world, but it will raise awareness about a terrible issue that would otherwise go unspoken and *hopefully* let the people of Sudan know they are not alone.

Be their voice when they don't have one. pic.twitter.com/EuhfDz7auw

Why is barely any international news channel giving this proper coverage? It’s heartbreaking to read about what’s happening in #Sudan and so is the indifference towards it. https://t.co/YxSRISaIIf

As international onlookers, we each have a responsibility. But today’s world moves faster, individuals are increasingly divided, rendering us politically more fragmented, and emotionally more disconnected even while we can access a more globally connected, mediated reality.

So as the world turns its attention away, what does the future hold for Sudan?

Stability at the expense of democracy will reign. Sudan’s oil resources are too valuable to allow the region to devolve into an African Spring.

Sudan will be circled by opportunists seeking to capitalise upon the situation. Clever Sudanese securocrats are busy shoring the bulwarks against threats to their own interests – a scenario so often recorded in Africa.  And while the West is too self-involved to make meaningful diplomatic interventions, China and Russia will be closely watching for openings to advance their own interests, unfettered by human rights concerns.

If there is a silver lining, there is at least a modicum of restraint on part of Sudan’s leaders now, subdued by the knowledge that anarchy can fell destabilised states. But Sudan’s people and its rulers know that without international intervention, Sudan’s diseased economy will flounder under massive debt, with anarchy close behind. If the West continues to maintain disengagement, other power-brokers will swoop in and the Sudanese will see the sun rise on yet another day in ‘Dictatorland’.