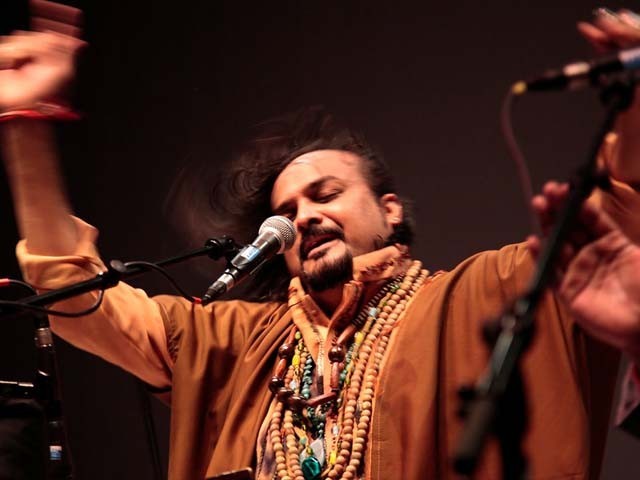 His recitation was eerily reminiscent of how his father, Ghulam Farid Sabri performed his signature qawwali tracks. It was the exact same way his uncle, Maqbool Ahmed Sabri also performed. This style of qawwali can probably be traced to how his ancestors had performed, right back to the time of Mian Tansen, a favourite musician of the Mughal court.

Perhaps because theirs was a proverbial  ‘qawwal gharana’ (a family of qawwals), was why in my mind,  Sabri’s Karachi household eternally vibrated to the combined music from harmoniums, tablas, dholaks and sarangis used to produce a qawwali.

All of us know that qawwali is no ordinary music and nobody knows this better than the qawwal himself. An ode to Prophet Muhammad (pbuh), his son-in-law Hazrat Ali (AS), and above all, to God directly, qawwali is a form of sufistic devotional music originating from South Asia and is part of a musical tradition that stretches back beyond 700 years. In essence, qawwali transcends all forms of music ,where the aim of performing is to reach arsh (spiritual heights of love, including ordinary, spiritual and celestial love). This was probably best portrayed in their legendary ‘Tajdar-e-haram‘:

(What should I tell you, O Prince of Arabia,

You already know what is in my heart,

In your separation, O’ you who bear the title of the untaught One,

Our sleepless nights are so hard to bear,

In your love, I have lost all sense of consciousness,

How long will I remain in this state of unconsciousness)

Anyone who has attended even a single Sabri qawwali night would agree that the performance on its own would melt even the hardest of hearts – putting it on the path of a spiritual high. And this is where the paradox lies. Be it the elderly Sabri brothers or Amjad Sabri (with whom my generation is more familiar), the modulations remained the same, each performer enjoying the effect it had on their respective listeners.

Born on December 23 1976, Amjad Sabri was introduced to this genre of music at a very young age and joined his father on stage to perform in 1988 when he was aged 12. Hence it was no wonder that the youngster would be hauled out of bed by his father at 4am to wash, pray, fetch his instrument and perform his first raag of the day. He once described it as finding it difficult to be awoken so early in the morning but admitted it was the right way of doing it, because if a raag is performed at the right time, the performer himself enjoys it to the fullest.

And because he pointedly enjoyed his recitations, his performances always radiated calmness, spiritual fervour and joyful energy – creating an identity in a specific art where he effortlessly defied all social boundaries and simultaneously tackled diversity. And that’s what makes Sabri the legend that he is.

He would perform at Sufi shrines, sitting cross-legged on a mat with his accompanying skull-capped chorus. Recall his stellar Coke Studio performance recitation of Ameer Khusro’s kalam ‘Rang‘ that he did with Rahat Fateh Ali Khan.

Then there were the innumerable TV appearances that he regularly made, including morning shows and Ramazan transmissions. And I, for one, will remember him for his legendary events at the Karachi Gymkhana club.

But others who knew him up close and personal share details of the kind of person he was; a world famed qawwal who would stroll around the narrow lanes of his neighbourhood in Liaquatabad. A man who would try his hand on random carrom board strikes, treat fellow cricket enthusiasts to his off-spin bowling, chat with strangers at dhaabas and keep his Ludo board a permanent fixture in his bedroom at home. This was Sabri in his own element, the family man that his clan knew and adored.

Yet, how many of us are aware of the hurdles of ‘being a Sufi’? Certain extremists find the mysticism of Sufism, its reverence of the saints, and representation of Islam disseminated through art (including music and dance), abhorrent.

As a result, Sufi shrines were bombed by extremists, and singers were shot. The law even failed to protect them. In 2014, the high court, not extremists, accused the younger Sabri of blasphemy for singing a qawwali on a morning show that mentioned members of the Prophet’s (pbuh) family. The threats simultaneously hit home: six months prior to his assassination, three men had allegedly broken into his house with the intention of harming him, retreating only after realising that he was not there.

Sabri was an upstanding man, seemingly operating on a very different tangent of existence. He was among us, but not really with us.

Ironically, his last recitation on a morning show before his death was ‘Ae Sabz Gumbad Wale Manzoor Dua Karna’ which included the stanza:

(When I shudder in my dark tomb, my dear Prophet, look after me)

On the same day, while he was on his way to perform at another morning show, two men on a motorcycle intercepted him and riddled his car with bullets. The brutal shooting had taken place near Karachi’s Liaquatabad underpass that was named after his father.

And that is when the music died too.

Sabri’s voice and music connected generations and gave us a shared religious language. His father had recited that way. His uncle had recited that way too, and now his own 12-year-old son performed his ‘Karam maangta hun’ rendition in tribute to him, for all of us can truly emulate his essence.

Because Amjad Sabri represented something all of us are capable of being: peaceful, gracious, passionate.

Because you can never dim the light of a star so bright.