#TherapistDiaries: Is that tall, dark figure a paranormal force or a cultural belief? 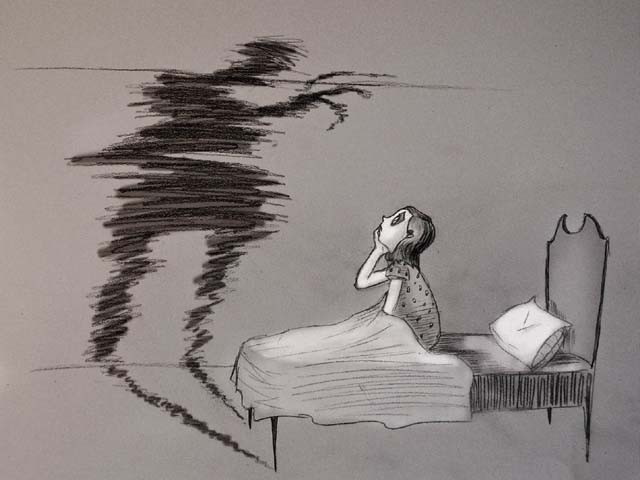 All the classes reported at least one instance of a strange demon paralysing them in their sleep, leaving them unable to breath or move properly. PHOTO: PINTEREST

Horror is the most bankable genre in literature and cinema. It plays with our evolutionary drive to survive and the fear embedded in our collective unconscious.

South Asian culture is very rich in terms of folklore, myths, ghost stories and remedial measures for the paranormal. Even though the religions followed in South Asian countries validate the existence of paranormal, psychologists feel that much of it is blown out of proportion because of the inherent fear in people.

As a therapist in a Pakistani society, it is extremely important for me to distinguish between unexplained paranormal phenomena and a medico-psychological condition triggering paranormal beliefs. I do so with the help of the internationally followed diagnostic manual containing criteria for every psychological disorder along with the cultural appropriation.

I remember getting spooked by Hamlet when I read the very first scene. I think that was the beginning of an interest in the paranormal.

A couple of years ago, I was teaching at a university and had to introduce Sleep Disorders to the students. Before I started out with the subject, I asked them if they or somebody close to them experienced anything odd associated with sleep.

It was not uncommon to see that almost all the classes reported at least one instance of a strange demon paralysing them — or somebody that they knew — in their sleep, leaving them unable to breath or move properly, for a couple of seconds to minutes. Majority of them believed that it was caused either by black magic — that ghosts could be summoned to do this to people — or by a bad, angry spirit inside the house. Most commonly suggested and used remedies were staying in ablution all the time, reciting scriptures to bed, making a circle of protection around the bed, wearing an amulet, drinking special waters etc.

I understand the helplessness inherent in a situation where you feel that you cannot even fight the powers that wrong you. In certain situations, ‘fear’ is the only natural response and survival hack that our body knows. Biology explains us that our primitive brain takes charge in such situations and puts our evolved brain to rest. Hence, we seek measures that make little to no sense because that’s our primitive (reptilian) brain kicking in.

The truth, however, is slightly different.

I once came across a very compelling case of a colleague working abroad. They reported about a client whom I’d be giving the pseudonym Miss K*.

Miss K was a woman in her late 20’s. She lived with her husband in a suburban setup and was a housewife.

One day her husband left for work and as a routine she ran the security system. After completing the household chores, she decided to take a nap on the sofa in the lounge. It must have been a few minutes into her nap when she awoke and sat up on the sofa, and the next thing she saw left her completely frozen in her position.

Surrounding the sofa were five extraordinarily tall men in black attire with black masks. She put her hands on her ears, closed her eyes and started screaming at the top of her lungs until the neighbours came at her door and somebody called the police too.

She opened her eyes only when her husband reached the house and left a number of voicemails on the landline.

She saw that nobody was around her and nobody had messed with the security system, neither did the security alarm go off. Nothing was taken, touched or altered in the house. The neighbours were mowing their lawns and nobody saw anyone coming near the house. A couple of community kids were cycling in the neighbourhood since morning as their routine in summers and even they didn’t notice anyone around.

What do you think happened to Miss K?

Sleep paralysis is a very common psychological disorder. It’s a state where you wake up and feel a sinking pressure on your chest. You feel immobile and see a shadow with a feeling of somebody being in a periphery watching you.

Sleep paralysis, very much like sleep walking, can be genetic as well. It happens when body transitions from REM (Rapid Eye Movement) sleep state. In this state, a person experiences vivid dreams and the muscles are paralysed by the brain—for body’s protection— so that the person cannot physically act out on dreams. This results in a terrifying experience for the person. And since this happens without any warning, the fear stays for a longer period of time.

On the other hand, the phenomenon experienced by Miss K, is pretty much common.

Almost all the ghost sighting stories that I have heard as a child or as a therapist, involves either an awakening from sleep and any of the senses experiencing something paranormal, or falling into sleep and having a paranormal sensory experience—touch, taste, sound, visual and smell.

Remember those experiences you encountered or stories you heard of pungent aromas in the middle of your sleep? Or feeling like someone slapping you in your sleep because you refused to wake up for morning prayers? Can you recall any story about a supernatural voice calling a person’s name?

And the most common one, did you ever wake up in the middle of your sleep and find a tall figure leaning onto the fridge or standing by your curtain?

All these sensory experiences are neurological phenomenon known as ‘Hypnagogic and Hypnopompic hallucination’. These hallucinations are perfectly normal experiences that can occur with or without sleep paralysis.

Stress, trauma and anxiety increase the frequency of these hallucinations, and in that case you’ll need to seek therapy to resolve the source of your stress, trauma or anxiety, but these can also happen without any stress.

What Miss K experienced was a Hypnopompic hallucination. Her response to hallucination was stressful and took her a few counseling sessions to recover from the dreadful experience.

Our cultural beliefs and stories play an important role in shaping our beliefs about odd experiences but there exist scientific explanations to most of these paranormal incidents. In my practice, I have seen enough people suffer because their families interpreted their incidents with a different lens, most of the times the one that is influenced by our cultural ties.

It seems like they don’t want to give up the cultural or family explanations of these odd neuropsychological and sensory phenomenon. And I don’t know why they’d choose the feeling of helplessness, powerlessness and submission to a paranormal force when there is a scientific explanation. Maybe it’s about strengthening the faith in the higher power or maybe there are other motivations to it—I don’t want to gaslight their experiences.

However, even after knowing that neuropsychological phenomenon explain most of the paranormal, each time a patient comes to me with these experiences, I keep my mind open and listen with a possibility of truth. In Hamlet’s words:

“There are more things in heaven and earth, Horatio, than are dreamt of in your philosophy.”