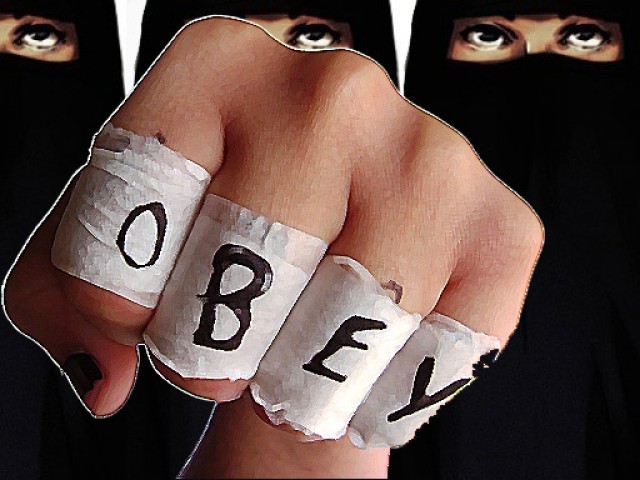 60 men beating school girls with iron rods for not 'dressing moderately' is no less than a national tragedy.

The recent attack on the MC Model Girls High School in Rawalpindi is no less than a national tragedy. When 60 men, armed with iron rods waltz into an educational institute to mete out violent justice against women and children for not ‘dressing moderately’, it is a low point in the very substance of a nation.

When an armed mob of religious vigilantes entered the school they did more than just beat innocent children and teachers. They instilled fear in every female student, in every girls school, and in the mind of every parent of a girl. The fact that the assault was allowed to happen is perhaps what is most terrifying. A massive group of sixty men, armed with rods and sticks, does not go by easily unnoticed. Moreover, the reports of a police official actually stating that they were under instructions not to do anything about the attack is enough to send shivers down the spine of any self respecting Pakistani. The realisation that the children of our nation are not safe while studying at their schools erodes whatever faith we may have left in the system.

A number of people (myself included) have been shedding light on the fact that the gate to the school was left ‘mysteriously open’, and how there should have been more security in place to prevent such an incident. Yet, focusing on these aspects of the tragedy tends to miss the point and the larger problem. This is that in no respectable society should there be a need for security against such an attack. Armed men assaulting women and children in a school should be an idea so abhorrent in itself that its possibility of occurring should never even enter anyone’s mind. The larger problem at hand, thus, is that what we need is religious reform, not gates and security guards.

Sadly, this event is not unique in any way. In fact, if we jog our memories, we are reminded of the atrocities committed against girls studying in schools in Swat, and more recently the attack on a van filled with school going children near Peshawar. What is unique about it, however, is the location. Rawalpindi is not Swat, neither is it in any way, shape or form geographically outside the influence of the state. Indeed it is only a twenty minute drive from the capital of the state in question. The implications of this are as important as they are chilling. If such events can be allowed to take place in main urban areas without the perpetrators being reprimanded, then what is to stop it happening all over in girls schools in Lahore, Karachi, Islamabad and elsewhere.

The answer is nothing at all.

Yet the conviction of Mumtaz Qadri did not silence advocates of the blasphemy law, neither did the arrests of some thugs stop violence against Christians. Thus one can imagine that a couple of arrests are unlikely to dissuade people with deep seated religious convictions from doing such a terrible thing again. The solution, therefore, lies at the root of the problem, not the branch, or in this case, the twig.

What is essential for Pakistan to progress past such events is widespread religious reform. Our own cultural heritage, with respect to religion, is far removed than what is observable across Pakistani society today. This region was the region of mystics, of Sufi’s and saints who, with their emphasis on spirituality, created an understanding of Islam that was far more tolerant, peaceful and respectful to humankind than what is seen today. Yet even after that heritage was lost to Wahabi influences, it was not till recently that we began to see people misuse Islam so blatantly and grotesquely as we are now. For where in Islam does it say that it is permissible to use violence to communicate an idea? The answer is nowhere at all. Islam is a peaceful religion that preaches respect for humanity as a principle.

One might say that the group of attackers did not represent Islam or Muslims – which they most certainly did not – and that they were just a rogue group of extremists acting in an otherwise moderate atmosphere. One might say that using such an event as a wake up call (which I hope it is) is perhaps a case of blowing things out of proportion. To those people I would show videos of Mumtaz Qadri’s police van being showered with rose petals. To those people I would recount the incident of the SHO in Lahore who entered an art gallery and trying to have it shut down on account of fahashi or lewd. I might even point to the fact that Malik Ishaq, one of the founders of Lashkar-e-Jhangvi  not only walks free today, but was received by a crowd of twenty thousand upon his return to Bahawalpur from his stint in jail.

What is evident is that something needs to change and that something has got to be the prevailing understanding of Islam in our country. No longer can we allow religion to be misused and if and when it is, it is vital that our leaders have the wherewithal to condemn it and speak out against it, using Islam itself as a base for their condemnation of such an act.

I invite you to imagine what it must have felt like for a girl studying at the school present at the time of the attack; try and feel for yourself the pain, confusion and gripping fear that must have taken hold of the girls when a mob of angry men started beating them with rods for a fault which was not theirs. Ask yourself how you can live in a society where such an event does not prompt nation-wide uproar.

Finally, I ask you to do something about it, whatever that may be.