A day to forget: Can the ‘unpredictable’ Pakistan turn it around? 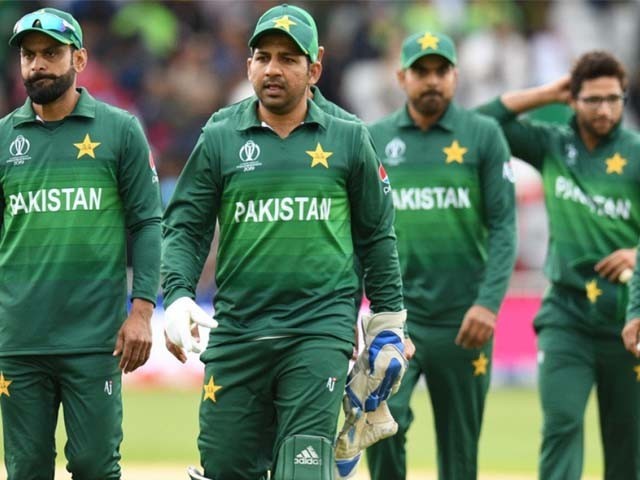 Pakistan's cricketers leave the field at end of play during the 2019 Cricket World Cup match between West Indies and Pakistan. PHOTO: GETTY

Pakistan’s encounter with the West Indies yesterday marked the advent of Pakistan’s World Cup campaign. While fans of Pakistan cricket are always wary of the threat the West Indies pose, most people expected Pakistan to emerge victorious. This, however, couldn’t be further from the truth.

To call it a ‘game’ would be undervaluing the effort by the West Indies, and overvaluing Pakistan’s performance. Pakistan was totally outclassed, with the match virtually ending within the first 10 overs, courtesy of some great bowling by the West Indies, coupled with some atrocious Pakistani batting. Pakistan were sent in to bat on a cloudy morning and only managed to amass a total of 105 runs. It would have been worse, had it not been for some lusty blows by Wahab Riaz at the end.

It was an absolutely terrible effort by the batsmen in what proved to be an abysmal start to Pakistan’s World Cup campaign. I see people criticising the bowlers for how they bowled but, given the circumstances, I find this utterly ridiculous. No bowler can be blamed for their performance in such a situation. Jason Holder of West Indies celebrates with his team mates.

My player ratings for the game are as follows:

Zaman initially looked brilliant and started off by playing some scintillating strokes, most notably a pick up flick over the leg-side. His dismissal was the result of the first of many bouncers. Given that fine leg was up in the circle, Zaman was well within his right to attempt the shot, but he was terribly late on the ball.

Given his performance, this rating is reasonable. He never looked comfortable at the crease during his stay and his early return to the pavilion seemed inevitable. You could say that he was a bit unlucky with his dismissal, but even before that he never looked assured.

Azam too launched into his innings by playing some beautiful shots, but his wicket was really his own fault since he got caught chasing a wide delivery. I’ve seen him get out in this fashion a few times now, so you would hope it’s not a weakness of his. Given the scintillating form he has been in lately, this outing was certainly a disappointment.

Sohail receives half a point for a lovely shot he played over the offside; however, apart from that, he was absolutely dreadful. The shot he tried to execute against a short ball was appalling because he played against his natural style of play, and that ultimately cost him his wicket.

Ahmed too, you could say, was unlucky for being caught down the leg-side. The only reason I give him three points is because he finally came up the order, even though I think the number four position is best suited for him.

As usual Hafeez looked sublime at the wicket, especially early on. I’m happy to see him play at number six and feel like it will suit his game more. He will, however, be concerned about getting out to the short ball since Hafeez is generally Pakistan’s best player of those sorts of deliveries. O Shane Thomas was relentless and his four wickets, including the wicket of Hafeez, crippled the entire Pakistan batting line-up. If someone gets a first ball duck, doesn’t bowl and fails to contribute in the field, you cannot give him more than a zero. His return to squad was hotly anticipated but he failed to deliver in any department.

Wasim once again lost his wicket to a short pitched delivery. This is surprising, and concerning, because when he burst onto the scene, I remember him playing the short ball relatively well. As a result of the appalling batting display, Wasim didn’t even have the opportunity to try and contribute with the ball.

Ali was hit for quite a few boundaries early on by Chris Gayle and finished with an economy rate of nearly 10. But naturally, one cannot be too hard on him since he barely had any runs to try and defend.

Riaz played the best innings out of all the Pakistani batsman. His six over mid-wicket was magnificent and his quick fire 18 of 11 balls provided some brief entertainment. He got taken to the cleaners by Gayle and leaked quite a few runs, but it is cruel to criticise the bowlers when the batsmen fail to do their job.

Undoubtedly, Amir’s effort with the ball was the only positive for Pakistan on a day to forget. Amir announced his return to the Pakistan squad with three much deserved wickets. He was quick and looked hungry for wickets despite having missed some previous matches. His absence was dearly felt by the team and it looks like he is going to be vital for Pakistan in the World Cup. Mohammad Amir of Pakistan celebrates after taking the wicket of Chris Gayle.

As made evident by the scorecard, Pakistan’s first match in the 2019 World Cup was a disaster. However, Pakistan are notorious for being slow starters in such tournaments and they gradually shift gears as they play more matches. But using that analogy, it looks like they have started this tournament in reverse gear.

So much went wrong. The shot execution was poor. The batsmen’s technique was virtually non-existent. How will they turn it around in a few days?

If this was any other team, you would write them off completely, but with Pakistan you just never know. It could have been an ‘off day’. Or I just hope that is the case. Some may call me foolish, but I do still believe that Pakistan can be a force to reckon with in this World Cup.

I look forward to Monday’s game against England. I am positive about our chances, and I genuinely believe we can beat the hosts; however, the toss will be crucial. If we win the toss, we must bowl. A lot depends upon our next game. Here’s hoping that our boys in green pull up their socks.